Trump hit China with more tariffs on $300 billion of imports, but as a percentage of GDP the trade war remains relatively small in its impact, and is thus unlikely to lead to a recession says CEPR's Mark Weisbrot

Trump hit China with more tariffs on $300 billion of imports, but as a percentage of GDP the trade war remains relatively small in its impact, and is thus unlikely to lead to a recession says CEPR's Mark Weisbrot 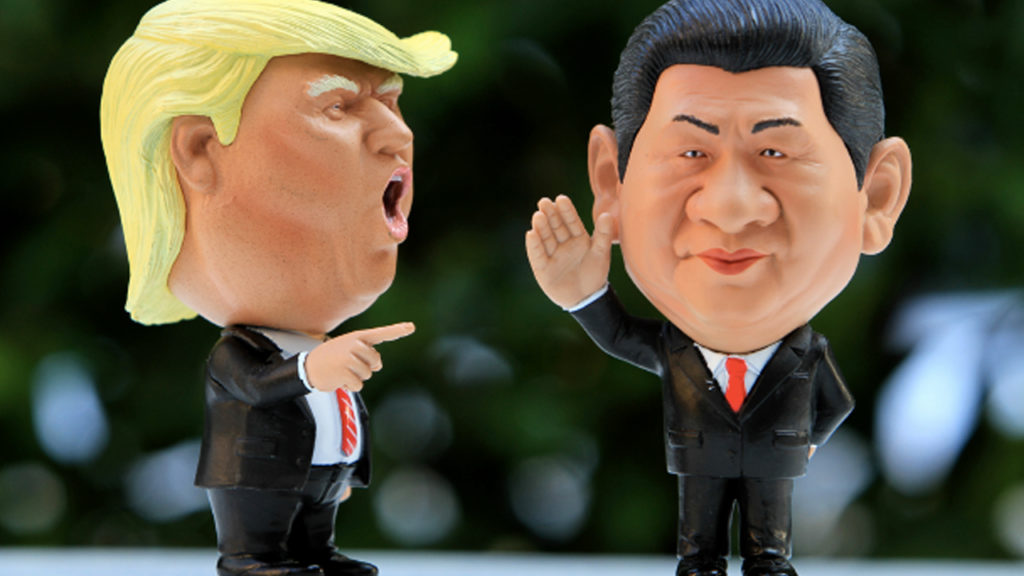 China announced on Monday that it filed a case at the World Trade Organization, the WTO, against the United States for its implementation of an additional 15% tariff on $300 billion worth of Chinese imports, which took effect on September 1. China says that the new U.S. tariffs violate not only WTO roles, but also an agreement that had been reached between the Chinese and U.S. heads of State during the G20 summit in Osaka, Japan last June. Here’s what Gao Feng, spokesman of the Chinese Ministry of Commerce, had to say about the decision to take the U.S. to the WTO.

GREG WILPERT: Meanwhile, in a more positive development, trade negotiators from both countries announced on Wednesday that they had agreed to hold a 13th round of trade talks in early October in Washington D.C. Joining me now to discuss the status of the U.S.-China trade war is Mark Weisbrot. He’s codirector of the Center for Economic and Policy Research and the author of the book Failed: What the “Experts” Got Wrong about the Global Economy. Thanks for joining us again, Mark.

MARK WEISBROT: Thanks for inviting me, Gregory.

GREG WILPERT: So it is generally acknowledged that Trump’s trade war with China causes economic damage in the United States, in China, and actually around the world. Now, just how serious do you think that this is for these countries and also for the world? In other words, will this lead to a recession as some have predicted?

MARK WEISBROT: I don’t think so. First, there’s several things you have to look at to understand the importance of this, and the extent to which it’s been exaggerated. I mean, obviously it’s a bad thing and it does cause damage, and a lot of it’s not that measurable. So you’ll see these surveys of businesses saying that they’re going to invest less because of the uncertainty. And then that’s damaging. We don’t have a really good way of measuring it. If you look at the actual trade between the two countries, it’s just not that big, so it wouldn’t push the U.S. into a recession. So for example, our total exports to China are about a little over half a percent of our GDP, our output. And that’s down about 22% from 2018 to 2019 if you look at the first seven months of data that we have. So that’s just not going to have a huge impact on the U.S. economy.

And the Chinese economy is a whole different story. We can look at that if you want. Obviously, their exports to us are much larger, to the U.S. are maybe a little over 2% of our GDP, and a little bit larger share of theirs. But again, China can adapt. They have a lot more tools than we would have. They control most of the banking and financial system. And in 2009 when there was a world recession for example, they lost more than 3% of GDP in exports–which is many times more than this–and they still grew 10% that year because they just shifted their economic activity. So again, there’s countries in Asia that are being affected–South Korea and Japan and other countries–as these supply chains become more uncertain, because they don’t know what Trump is going to do. But the idea that this is going to push the U.S. economy or the world economy into recession, I think those are very unlikely.

GREG WILPERT: Now, CNBC actually reported on Thursday that the editor-in-chief of the Global Times, a Chinese tabloid under the People’s Daily, he said that negotiations will lead to an agreement and a breakthrough very soon. And it seems though that, at least superficially speaking, that the two sides haven’t budged all. China won’t give in on the intellectual property rights concessions that Trump actually wants, which seems to be a large chunk of what the sticking point is about. What do you think? Is an agreement near? And if so, what might such an agreement look like? Who will be actually giving in, in effect?

MARK WEISBROT: Well, for this part you really have to look at Trump. And I know that’s not easy, because he’s unpredictable in many ways. He doesn’t seem to have core principles or a strategy, or anything like that. But I think it is predictable from looking at him, actually … I think he wants to get reelected. That I’m pretty sure of. And to get reelected, he doesn’t need to really win anything on this. I mean, if he keeps dragging it out and accelerating it, it could cause him trouble. First of all, his biggest donors and the Republican party’s biggest donors, they’re not for this at all. I mean, some of them do want to fight for their intellectual property and things like that. But the majority of the people who Trump cares about in terms of donors and the Republican party cares about in terms of donors, they don’t want this fight with China, because they’re still making a lot of money there. And they don’t want the disruption.

So what else would make him ride this all the way to something that could be political suicide? His base. There’s his base. Now, here’s where Trump is really a different kind of political leader than you’ve ever had, I think, as President of the United States and is very rare in the entire world. Most political leaders, even including dictators, they want to expand their support outside of their hardcore base. If you look at Trump’s time in the presidency, he’s almost exclusively appealed to his base. And you can see this in various polls and in his approval ratings and everything. And why has he done that? Well, that’s mostly because it’s a strategy. It’s partly a strategy to avoid impeachment.

He had to always make sure that there were at least 34 senators that would never vote to convict him if he were impeached. And to do that, he needs his base to be strong. He has a hard core base of support somewhere in the probably low thirties. And that’s what he has needed and that’s what he’s focused on. Now, does the base care about this? Not very much. So if he comes back with some kind of deal that he says is a terrific deal, as he’s done in these other trade fights, that base isn’t going to move. That base doesn’t move. His approval rating really doesn’t move very much overall. So that includes his hardcore base and also people who really don’t like him, but they like the tax cut or whatever. And so, it isn’t important to him there.

So for all those reasons, I think you can predict–as you just quoted this Chinese official–that yeah, they’re going to settle this and it’s not going to lead to some kind of escalating trade war. Now, over the long run, we have a different story. And we can talk about that some time if you want. I mean, China is a larger economy than the United States in purchasing power parity terms. And I think we’ve talked about this a little. And they have an industrial policy and there are all kinds of reasons why the United States, which is much more of an empire is going to … Our leadership is going to increasingly run into conflict with China. And some of it will take the form of commercial battles, but this isn’t going to be the one that explodes.

GREG WILPERT: Well, I just want to drill a little bit, or follow up a little bit deeper on this issue of who is in favor of this conflict with China. Because it seems like the Trump administration, one of the things that’s different about it compared to previous Republican administrations and also compared to the Democrats, is that they see China as being the enemy, or as the main adversary. And you basically alluded to that partly because of the large economy. But there’s also, of course, other geopolitical considerations, I guess, including the military. Now, I’m just wondering what are the forces in the Trump administration that are pushing for this confrontation? And will they give in? Because after all, I know Peter Navarro, Trump’s trade advisor, and also John Bolton and Mike Pompeo, the Secretary of State, are actually very much in favor of fomenting conflicts with the United States. But what interests are they pursuing here?

MARK WEISBROT: Yes. Well, as you mentioned, Peter Navarro, you have also Lighthizer. And you have the neoconservatives which represent a different faction, that I think was really put there, as the New York Times reported, for example. John Bolton was really put there by Sheldon Adelson, a big Republican and Trump donor. And Trump doesn’t really love that philosophy, but he makes a lot of concessions to it. And so, what does that all add up to? And of course, it’s very hard to tell with Trump because he’s so erratic and unpredictable. But I do think that the balance of forces there … Yeah, if you left it up to Pompeo and Bolton, that they would have a fight with China. But you have business interests; you have donor interest. And they’re just too tied to the Chinese economy to want to have an all-out fight.

And they also believe in the kind of neoliberal globalization that they’ve promoted everywhere in the world for so long. And so, you have people like Mnuchin, and you have the donors. And they share, I think, the view of the critics who would like to see the U.S join the TPP. And Trump did mention that in passing a couple of times, he just didn’t make any serious steps that way. But the Trans-Pacific Partnership, that was the one thing that Trump did that really did go against all of these most powerful interests in the United States, including the whole so-called National Security State. So those people have, I think, a much more decisive influence than the neoconservatives or the others who want to have a big fight with China. And China’s not going to give in on this stuff, because they don’t have to.

GREG WILPERT: Okay. I just want to clarify for our viewers, TPP is the Trans-Pacific Partnership, which was specifically designed as a neoliberal project to confront China. But we’re going to have to leave it there for now. I’m speaking to Mark Weisbrot, co-director of the Center for Economic and Policy Research. Thanks again, Mark, for having joined us today.

Trump’s China Tariffs: A Misplaced Strategy for the US Economy