The police department may be using the COVID-19 shutdown as cover to launch what an ACLU attorney says would be "the most wide-reaching surveillance dragnet ever employed in an American city."

The police department may be using the COVID-19 shutdown as cover to launch what an ACLU attorney says would be "the most wide-reaching surveillance dragnet ever employed in an American city." 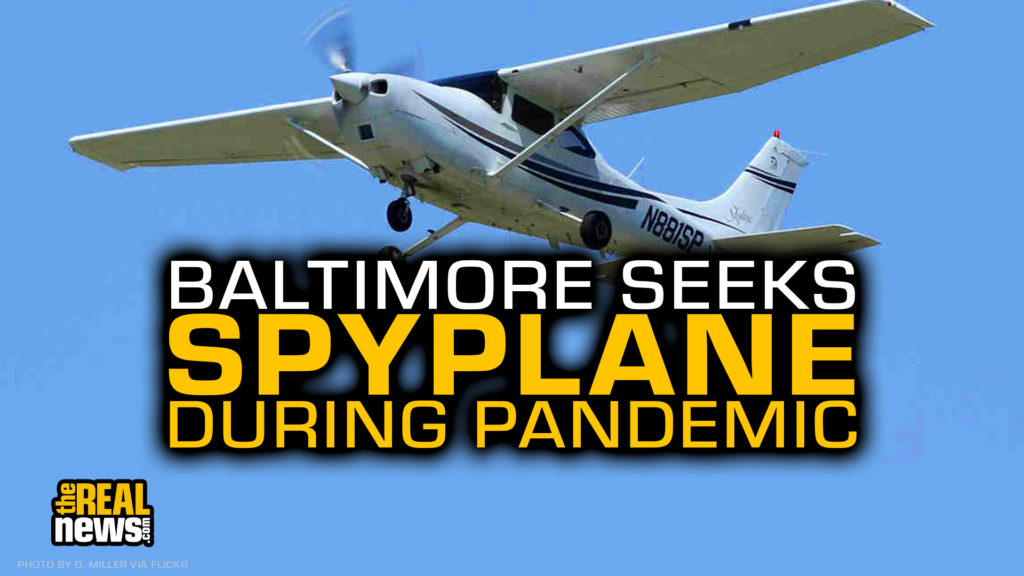 Jaisal Noor: Welcome to the Real News. I’m Jaisal Noor. Baltimore’s police force has been described as one of the most corrupt in the country, and now local activists are seeking an injunction against its spy plane program. What’s been described as an unconstitutional power grab by authorities who have a long history of surveilling activists, violating constitutional rights and engaging in broad and brazen corruption.

Well, now joining us to discuss this is Brendan Soderberg. He’s the co-author of the forthcoming book. I Got a Monster, The Rise and Fall of America’s Most Corrupt Police Squad. His coauthor is Baynard Woods. Brandon, you’ve been following this issue really closely for years. Police say spy planes are a tool needed to fight crime, but this latest iteration was approved with little public input and now local activists and the ACLU are suing to stop it. Talk about why they’re concerned.

Brandon: Right. Without going into the long tale of this plane really briefly, this surveillance plane, which flies over Baltimore covering about 30 square miles at a time. It first flew totally in secret in 2016. No one knew other than the police. I don’t believe even city council or the state’s attorney’s office knew, some point the mayor found out about it.

This flew as a test, an illegal secret test, in 2016, and the idea is that it can capture above ground everything that’s happening. You can rewind and fast forward that footage. You can zoom in on it, and that could be used as an investigative tool towards solving a crime, especially violent crimes, shootings, non-fatal shootings, car jackings, those kinds of things. Of course, when this thing, which is created by a military technologist who tried to put it in Dayton, Ohio, and Compton in the past, both of whom said no.

When it was revealed, there was this massive outrage as there should have been that, hey, we weren’t told about this thing. This thing flew throughout the year. It recorded some protests as well. It was used to sort of fly over protests on top of all these other things, and the argument at the time was it didn’t solve a lot of crimes.

Jaisal Noor: Wait, so Brandon, just to emphasize that point, there was evidence that police had basically lied and misled the public about an incident in which they were involved in, and they had the evidence and they covered it up for years.

Brandon: Yeah. They just ignored it and said it didn’t show what it showed, and I say this so confident, because I’ve seen the footage. It shows police lying about the nature of this stop, which ended with a man being shot and the guy survived the shooting. But he also did about three years for a gun they said they found on him after shooting. The officers involved in this turned out to be part of this Gun Trace Task Force, a sort of notorious police scandal, dirty cops.

Fast forward, there was after this sort of breach of trust by the public, who were frustrated by the launch of this plane in secret, and ACLU addressing it, activist addressing it. The plane was sort of pushed a few more times in the past few years, including at some point as a deterrent against dirty cops. People didn’t really buy it.

Cut to 2019 last year, we had another sort of a spike in homicides yet again or a spike on top of the spike, and then it was sort of brought up again, hey, we need the spy plane. A lot of sort of white collar business types really pushed it, because I think they can really say to investors and developers, hey, we got this plane. We have this top tier technology, it’s going to stop crime, and it reduces this a concern by rich people about crime in Baltimore. Then they’ll want to invest.

Really, it had this push by investors and developers and sort of liberal foundations, but it was still was debatable. There was a poll that was really a phony poll about it, and then it felt like it died. Then suddenly at the end of the year, the police had a press conference and were just like, this plane’s going up in May. It’s going up, we’re announcing it. This is a pilot program. We need to test if it works, and conveniently ignore that they already tested in 2016 in secret and it didn’t do very much.

People were surprised by this and shocked by this. Then it sort of again died down as people just pondered what it meant. The police promised transparency, accountability, all the sort of buzz words, which at least seemed like, hey, they’re not flying in secret this time, so that’s an improvement. Then they said they were going to have these series of public events we will come.

Now the limitations of this kind of public events are what they are, because they’re held by the police. They’re moderated by the police, and they’re sort of, the police are determining the storyline at this. I’ve been to enough of them to know, but okay, fair enough, they’re at least going to do that.

Then what happens is they have one of these town halls, mid March, right before COVID-19 really put us all inside and about 20 people showed up. I didn’t go to it for that exact reason. I didn’t feel great about being in a room with maybe 30 or 40 people. This is like March 14th or 17th, something like that. Then the police were like, okay, the next two meetings will be online, so those were online. They weren’t particularly publicized, and then police were also like, oh, and heads up. We’re trying to really push this thing out even sooner.

All of this quick moving, which it didn’t even have the basic accountability that it was supposed to have, the memorandum of understanding that would sort of show how the police and the privately owned plane would… How they’d interact and who would have access to the footage, that was not going to be shown until after it was voted.

Council president and mayoral candidate Brandon Scott, who’s really been against the plane, leaked the memorandum of understanding, to make sure people had it. It was a pretty bold thing to do. All that sort of bubbled in bubble. It still got passed through the Board of Estimates. It was going to launch, and then this ACLU lawsuit dropped. Their lawsuit just says, so you’re saying what they’ve been saying for almost four years now. This thing’s fraught. It’s a problem. It’s recording everybody out all the time.

It’s an unprecedented form of surveillance, and then it’s also signed off by two activists, Erricka Bridgeford of the budgetary Ceasefire movement of the past few years, members of Leaders of Beautiful Struggle, and also the a rapper activist, Son of Nun, who all sort of said, hey look, it’s kind of Orwellian technology that we don’t trust the police with.

Erricka Bridgeford in particular, who’s working towards addressing the homicide rate in non-carceral ways, was basically like this is a massive waste of money. There’s so many better, smarter things to invest money into if you want to stop homicides than a spy plane.

Jaisal Noor: It’s crazy because Baltimore spends more per capita than any large city already on policing, and that’s clearly not worked. You have Ceasefire, you mentioned Erricka Bridgeford, and that is statistically shown to drop homicide, something like 20, 30% over the course of a weekend or even longer than that, and also the concerns about the fact that this is a totally…

Scandal after scandal, the corruption, the surveilling of activists and just the lawless behavior of the Baltimore Police Department, which you have a book coming out about that has a lot of people concerned, and the fact that this police force is not actually accountable to the people. It’s still a state agency, which allows them to not have many checks and balances on their power from the public.

Brandon: Yeah. In Baltimore, we have a very strange thing with us. The Baltimore Police are a state run agency, so city government actually has very little control. A couple of years it was a city council meeting about the surveillance plane, and city council did it cause it was requested. But again, Councilman Brandon Scott, Councilman Ryan Dorsey, a couple of other people were really just being like, this is just a big show because we’ll have this meeting because you’ve asked us to do it. We’ll discuss this thing, but we’ve actually no control.

We can’t vote for or against it. It’s entirely up to the commissioner and the mayor, who really only answered his state. We have a Republican governor who’s threatened to bring the feds into Baltimore every time there’s a shooting. It’s pretty much that the deck was stacked, so this ACLU lawsuit has really sort of undercut at the last moment for this thing to go through.

I believe that right now that until there’s a hearing later in April about the plane, it’s at sort of at a stand still, which maybe will at least give the people behind it, if I’m being very generous and good faith, a moment to reconsider the launch.

I just stress that like even if you put aside all of one’s concerns about the plane, it’s just amazing how allergic to accountability and transparency the city is, this department is, and seemingly the people involved with this plane are, that they have this plane up there, and what you have to worry about to record everybody.

But every single element of it is just been messed up or bundled or done in bad faith, and sort of ceasing to have even these basic, pretty much dog and pony show kind of town hall meetings. Then saying, oh, we can’t have them cause a COVID-19. We’ll still push it all through, is really disheartening. I expected a little better out of the police actually.

Jaisal Noor: That’s saying a lot, so Brandon Soderberg, coauthor of the forthcoming book that a lot of people are excited about with Baynard Woods, I Got a Monster, The Rise and Fall of America’s Most Corrupt Police Squad, and that’s dropping around July. Is that right?

Jaisal Noor: All right, cool. Well, we’re looking forward to having you both on to talk about that.

Jaisal Noor: Thank you so much, and thank you for joining us at The Real News Network.