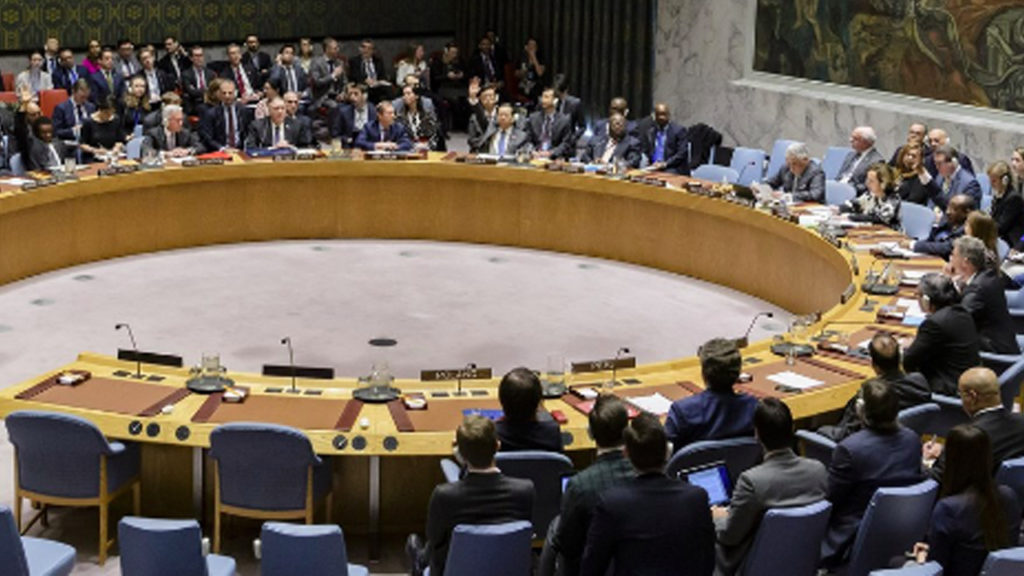 GREG WILPERT: A lively debate broke out at the UN Security Council on Saturday.

MIKE POMPEO: The United States is helping to recover a brighter future for Venezuela. We’re here to urge all nations to support the democratic aspirations of the Venezuelan people as they try to free themselves. Now it’s time for every other nation to pick a side. No more delays, no more games. Either you stand with the forces of freedom, or you’re in league with Maduro and his mayhem.

AMBASSADOR: It was just a series of insults that reflect the fact that today there is a satellite present here, and it is Venezuela, which is, unfortunately, which has become a satellite of Cuba and Russia.

AMBASSADOR FROM RUSSIA: Russia has no satellites. Venezuela is not a satellite of Russia. Cuba is not our satellite state. We don’t even use that kind of terminology.

GREG WILPERT: The UN Security Council held a special meeting that day to discuss the political crisis in Venezuela. Earlier in the week, the president of the legislature, Juan Guaido, declared himself to be president of Venezuela. Several countries, spearheaded by the United States, decided to recognized Guaido as Venezuela’s legitimate president. They declared Nicolas Maduro, who began his second term in office on January 10, as being illegitimate. Canada, Brazil, Argentina, and several other countries followed suit in not recognizing Maduro, saying that the May 2018 election was fraudulent. For his part, in reaction to these pronouncements, President Maduro broke diplomatic relations with the United States.

Key in these developments are calls from Venezuela’s opposition for the military to rise up against Maduro, which is why the government calls this a coup attempt. In what follows are excerpts from the speeches and talks that various ambassadors and foreign ministers gave at the UN on Saturday.

U.S. Secretary of State Mike Pompeo kicked off the round of speeches.

MIKE POMPEO: The United States is helping to recover a brighter future for Venezuela. We’re here to urge all nations to support the democratic aspirations of the Venezuelan people as they try to free themselves.

GREG WILPERT: Major countries such as China and Russia clearly took the side of Maduro, arguing that the United States has no business interfering in the internal affairs of Venezuela. First came China.

AMBASSADOR FROM CHINA: The situation in Venezuela belongs to the domestic affairs of that country. It does not constitute a threat to international peace and security, and it is not on the agenda of the Security Council.

GREG WILPERT: Then Russia responded not only to the U.S., but also to comments from the German ambassador.

AMBASSADOR FROM RUSSIA: You have a very strange way that you’re proposing of preventing this crisis. You completely disregard the sovereignty of Venezuela, imposing on it decisions that you prefer, and rejecting its people the right to resolve their own problems by themselves. You’re not calling for the political forces of Venezuela to find a common understanding in the interests of achieving internal peace and stability. You’re calling the legitimate authorities to simply acknowledge their defeat and to transfer power to the opposition.

GREG WILPERT: Two hours into the session, Venezuela was finally allowed to make its case, which Foreign Minister Jorge Arreaza did with vehemence.

JORGE ARREAZA: We have tweets here from social media. We have appeals, calls to the security forces, to the Bolivarian National Army, to take position against the legitimate authorities, against the constitutional government of President Maduro, by Secretary of State Pompeo and by Vice President Pence. It was on the 22nd where Vice President Pence, basically in a tweet, gave a green light for a coup d’etat in Venezuela. If so, if one of you can tell me in which article and in which provision of the United Nations Charter you can find the basis for the self proclamation of an individual who wasn’t elected by anyone as president of the Bolivarian Republic of Venezuela.

It wasn’t Marco Rubio, it was Donald Trump who threatened the use of military force directly against the Bolivarian Republic of Venezuela. This is the Wall Street Journal. Even the Wall Street Journal, as last year the New York Times did, as well, in September, that demonstrated that there were meetings of Venezuelan officers who were going to overthrow Maduro; meetings with officials from the United States in Washington. It was the New York Times. It wasn’t the Cuban intelligence or Venezuelan intelligence that reported this. It was the New York Times. Europe is giving us eight days. Eight days. Where do you get that you have the power to establish a deadline or an ultimatum to a sovereign people? Where do you get this? It’s almost childlike.

GREG WILPERT: Replacing Mike Pompeo at the Security Council that day was Elliott Abrams, a longtime anti-communist hardliner of the Reagan and George W. Bush administrations who was convicted in the Iran-Contra affair, and has a long history of supporting right-wing governments in Latin America.

ELLIOTT ABRAMS: This is not about foreign intervention in Venezuela. It is not an attempt to impose a result on the Venezuelan people. Democracy never needs to be imposed. It is tyranny that has to be imposed. This discussion in the council is about the right of the Venezuelan people to direct their own internal affairs and choose the future of their own country democratically. Thank you.

GREG WILPERT: Many of the speakers that day were from small island nations of the Caribbean, all of which supported the Maduro government and condemned U.S. efforts at interfering in Venezuela’s internal affairs. First came Cuba.

AMBASSADOR FROM CUBA: The current administration of the United States of America seems to have dusted off the Monroe doctrine, and to be wielding it as its preferred arm of diplomacy. And in a fresh extension of its imperialist policy in the region is threatening with particular ferocity and malice Venezuela, and has gone so far as to declare that all options are on the table.

GREG WILPERT: The ambassador of the small island nation of St. Vincent and the Grenadines had the following to say.

AMBASSADOR FROM ST. VINCENT AND THE GRENADINES: Mr. President, unequivocally, Venezuela is not a trap, nor represents a danger to international peace and security. Albeit the government is subjected to a systematic campaign of aggression. History teaches us that the rejection of dialogue is often a precursor to unilateralism and war; an option that we cannot countenance in our zone of peace.

GREG WILPERT: The ambassador of Surinam, a small country to the east of Venezuela, also took the Venezuelan government’s side.

AMBASSADOR FROM SURINAM: The government of Surinam, as so many others on our continent and throughout the Americas, is following with great concern the situation in and regarding the Bolivarian Republic of Venezuela. Recent developments are particularly troubling, as they negatively affect the stability and tranquility in that sister country while possibly steering the region away from the ideals of a zone of peace.

AMBASSADOR FROM BARBADOS: The expressed grave concern about the plight of the people of Venezuela and the increase in volatility of the situation brought about by recent developments which could lead to further violence, confrontation, breakdown of law and order, and greater suffering for the people of the country.

GREG WILPERT: The ambassador from Dominica, another Caribbean island nation, said the following.

AMBASSADOR FROM DOMINICA: The government of the Commonwealth of Dominica in its utterances and right actions fully respects the will of the people of any sovereign nation as exercised through the electoral process.

AMBASSADOR FROM ANTIGUA AND BARBUDA: My government, Mr. President, therefore rejects any external force that interferes with the internal matters of the government of the Bolivarian Republic of Venezuela.

GREG WILPERT: While the U.S., Canada, the European Union and the conservative governments of Latin America such as Argentina, Chile, Colombia, and Brazil all took a firm position to not recognize the Maduro government and to support the self-proclaimed president, Guaido.

AMBASSADOR FROM BOLIVIA: -Makes it clear that any sanctions imposed on a third state outside resolutions of the Security Council are illegal in nature. They are illegal sanctions when imposed thus, unilaterally. The individual nation that imposes such unilateral sanctions, the nation that stands behind these economic and financial sanctions is, if you can believe their brazen cheek, seeking to provide us with a way of resolving the humanitarian crisis. I ask the question honestly, if you look back through history, which country has been better after an intervention by the United States of America? Have we not discussed in this very Security Council the serious adverse impact and consequences of situations such as the current situation in Iraq, or Syria, or in Libya?

GREG WILPERT: Mexico’s representative, which since Dec. 1 has its first progressive president, highlighted his country’s offer to mediate negotiations between the Venezuelan government and the opposition.

AMBASSADOR FROM MEXICO: It is precisely motivated by this that the governments of Mexico and Uruguay have proposed a new, inclusive, and credible process of negotiation, based on full respect for the rule of law and human rights.

GREG WILPERT: Uruguay took a similar position to that of Mexico.

AMBASSADOR FROM URUGUAY: And we reiterate once again that the worst possible solution for the people of Venezuela will be to double down on leaving them isolated on the international stage.

GREG WILPERT: Cuba gave one of the last speeches, lambasting the United States as it did in the days of Fidel Castro’s historic speech to the UN in 1960.

AMBASSADOR FROM CUBA: There were deliberate lies uttered today by the Secretary of State, [I mean] Mr. Abrams, and they fail to recognize that the Bolivarian Republic of Venezuela is a free, sovereign, and independent nation that takes its own decisions. Venezuela is not and will never be anybody’s satellite or lackey. It has its own institutions and its own people, which are the fount of its strength. And they will rally to the cause of the Bolivarian and Chavista revolution, and they will rally to the support of the constitutional president, Nicolas Maduro Moros.

We reiterate that the principle chief threat to international peace and security in our region is the intervention and interference of the United States of America, their return to the Monroe doctrine, and their bullying of and aggression towards the Bolivarian Republic of Venezuela, which has the declared aim of regime change and the imperialist goal of being able thus to loot, pillage, and strip the oil reserves of that nation. We recall that the United States, not Cuba, set up military dictatorships and organized a bloody coup d’etat in Latin America and the Caribbean. It is the United States of America, not the government of Cuba, which intervenes without scruples in the electoral processes and the internal affairs of the majority of the states of the planet. That is part of history and fact. They have sought to overturn and topple by force legitimate governments, and they’re seeking to do that again in toppling the Bolivarian Republic of Venezuela. They’re doing so through a campaign of defamation and the threats of military action. They’re calling for violence and coup d’etat.

Go back to your history books, Secretary of State Michael Pompeo.