Dima Khalidi discusses the legal and civil society ramifications of President Trump’s executive order adopting the controversial IHRA working definition on antisemitism, defining Judaism as a race or nationality, which would threaten free speech on US campuses and sow divisions among US Jews, and criminalize the BDS movement.

Dima Khalidi discusses the legal and civil society ramifications of President Trump’s executive order adopting the controversial IHRA working definition on antisemitism, defining Judaism as a race or nationality, which would threaten free speech on US campuses and sow divisions among US Jews, and criminalize the BDS movement. 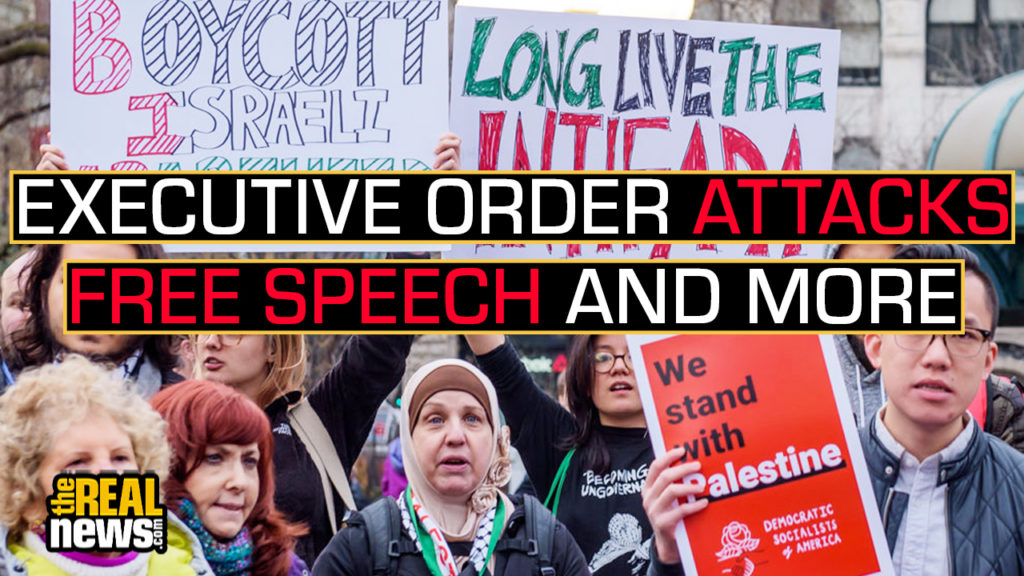 On Wednesday, President Trump signed an executive order that invokes Title Six of the 1964 Civil Rights Act. The executive order, however, deals not with protecting civil rights, but with denying them to Palestinian solidarity activists. The executive order adopts the controversial International Holocaust Remembrance Alliance, or IHRA, working definition of antisemitism.

In order to restrict free speech at U.S. campuses by targeting the boycott, divestment, and sanctions, or BDS, movement against Israel, and it defines Judaism as a race or a nationality. The executive order was apparently signed to appease American Jews who Trump had insulted in a speech last week, which we covered here on the Real News with Richard Silverstein. In that speech, Trump called Jews “real estate killers” and lamented that they don’t love Israel enough.

Pastor John Hagee is a Trump supporter who once said, “Hitler was doing God’s work,” and says he is awaiting Armageddon so that Jews will either convert to Christianity or be damned to hell. Here’s Hagee’s response to Trump’s executive order.

JOHN HAGEE: I have an exciting announcement to make. On behalf of the leadership of Christians United for Israel and our more than seven million members, I would like to personally thank the Trump Administration for issuing today’s executive order, which adopts the State Department’s definition of antisemitism. What president Trump did today is historically important. You cannot defeat what you will not define.

GREG WILPERT: Joining me to discuss the executive order on anti-Semitism is Dima Khalidi. She’s the founder and director of Palestinian Legal and Cooperating Council with the Center for Constitutional Rights. Thanks for joining us today, Dima.

GREG WILPERT: So let’s start with the practical side of the executive order. How does it directly affect the rights of activists to protest the Israeli occupation and war crimes against Palestinians, that is, beyond the declarative value of the order, could it mean that BDS supporting students can be expelled from universities, for example?

DIMA KHALIDI: Well, just to start; as you noted, Greg, the very purpose of this executive order is to make Palestine activism on campuses beyond the pale, is to label it as inherently anti-Semitic. And this is clearly in line with Trump’s broader agenda when it comes to Palestinians. It’s really bringing home the kind of international policies that he’s pursued that prop up one of the most extremist and racist Israeli governments in history. So all of the things he’s done there, moving the embassy, recognizing settlements, cutting aid to Palestinian refugees, this is bringing that kind of anti-Palestinian policy home.

And it’s also been part of Israel’s own agenda and Israel advocacy groups’ agendas here in the United States for many years to try to undermine this growing diverse grassroots movement for Palestinian rights. On a practical level, this executive order in effect directs executive agencies, especially the Department of Education to consider this very distorted and controversial definition of antisemitism in investigating civil rights complaints. So the way that we’ve seen this play out, we expect that to intensify. And the way it works is that there are allegations made of antisemitism on campus, the Department of Education may open an investigation, and what happens is that universities become enlisted to become sensors of the debate on this issue.

So they are obligated to take these kinds of complaints seriously and to investigate them. And now they’ll have the President himself directing them to use this very problematic definition in investigating these complaints. So what it will do is to require universities to scrutinize, to investigate, and to punish students, professors, other community members who are speaking out for Palestinian rights.

GREG WILPERT: Now Mairav Zonszein of +972 Magazine tweeted her response to the executive order, saying, “Let’s just be clear. Trump’s EO to define Jews as a nation is first and foremost a declaration of war on free speech, then on Palestinian self determination, then on Jews. I must admit, It is masterful this administration manages to hit on all three in one fell swoop.” Dima, do you agree with this framing?

DIMA KHALIDI: Well, there’s been some misunderstanding about the executive order’s actual intent in defining Jews as a nation. In fact, the Department of Education has for many years considered itself to have the authority to investigate discrimination based on religion in certain circumstances. So the executive order doesn’t do anything new other than introduce this definition of antisemitism and require the executive agencies to use this definition in investigating allegations of antisemitism. Now the fact is that this executive order, the definition itself and the way that it’s been used, that we’ve already seen it being used, does in fact strike at the heart of the First Amendment. The first Amendment prohibits the government from interfering in our free expression, and this executive order does just that.

It tells us what is acceptable discourse when it comes to Palestinian rights when it comes to Israel. It tells Palestinians that they can’t describe the way that Israel has treated them for 70 years­–their dispossession, the human rights violations that they face–and criticize their occupier. So one example that is in this definition is it says that calling Israel a racist endeavor is anti-Semitic. So you can imagine the kind of chilling effect that this has on the discourse on campuses where we’re supposed to be able to be challenged to have deep conversations about the issues of our day. So this executive order says that this discourse is only acceptable when our President says so. So it’s very problematic and it does strike at the heart of the First Amendment.

GREG WILPERT: Now, some observers have pointed out that there’s a bit of an irony here, that is the far right has been successfully using the First Amendment, which obviously is supposed to protect free speech, to promote right-wing hate speech on college campuses by basically cracking down on any universities that are questioning, essentially what amounts to hate speech among some conservatives from pronouncing themselves at these universities. And now though, it is using the Civil Rights Act, which was designed to stop hate speech, to discriminate against Palestinians and their supporters in the BDS movement.

Now, in other words, the Trump Administration seems to be trying to have it both ways. How do you think this will shake out in the judicial system, ultimately? Will we see judges and juries interpreting equality as racism and convict victims instead of victimizers?

DIMA KHALIDI: You’re right, Greg, that this turns the First Amendment on its head. When you see that these so-called campus free speech bills, when you see the executive order that the President signed on campus free speech, it’s in essence trying to protect certain speakers. And here also, at the same time, there’s an attempt to silence certain speakers and certain speech. So it’s very contradictory. And so far the way we’ve seen these kinds of issues play out in the courts and even in the Department of Education that the courts are not buying it.

Just recently, this definition was used to accuse a panel at the University of Massachusetts Amherst of being anti-Semitic and there was a lawsuit filed to try to stop it from happening. The court denied the injunction. The event moved forward. It was about, ironically, the exact censorship that we’re talking about here of Palestine speech.And the court recognized that this is a First Amendment issue. We’re talking about an effort to stop a certain kind, one side of a discussion here, and that is not allowed. And the Department of Education itself has, during the Obama Administration, dismissed a number of complaints alleging that the activism for Palestinian rights was anti-Semitic, created a hostile anti-Semitic environment, under the Civil Rights Act. And those dismissals again made very clear this is political speech. It’s not discrimination, it’s not harassment under Title VI of the Civil Rights Act.

And that’s what we expect courts to keep doing here, to be able to make the distinction between criticism of a state criticism of a political ideology like Zionism and hatred against Jewish people and discrimination and harassment of Jewish people for their religion or ethnicity or national origin, or what have you.

GREG WILPERT: Okay, well, we’re going to have to leave it there for now. I was speaking to Dima Khalidi, Founder and Director of Palestinian Legal. Thanks again, Dima, for having joined us today.

DIMA KHALIDI: Great to be with you, Greg,

Dima Khalidi is the founder and Director of Palestinian Legal (formerly Palestine Solidarity Legal Support), and Cooperating Counsel with the Center for Constitutional Rights (CCR). Her work includes providing legal advice to activists, engaging in advocacy to protect their rights to speak out for Palestinian rights, and educating activists and the public about their rights.…