Trump accuses China of currency manipulation because their currency devalued in the wake of his tariffs. However, as Bill Black explains, this accusation has no basis in fact. Instead, Trump's trade war only increases the likelihood of a recession

Trump accuses China of currency manipulation because their currency devalued in the wake of his tariffs. However, as Bill Black explains, this accusation has no basis in fact. Instead, Trump's trade war only increases the likelihood of a recession 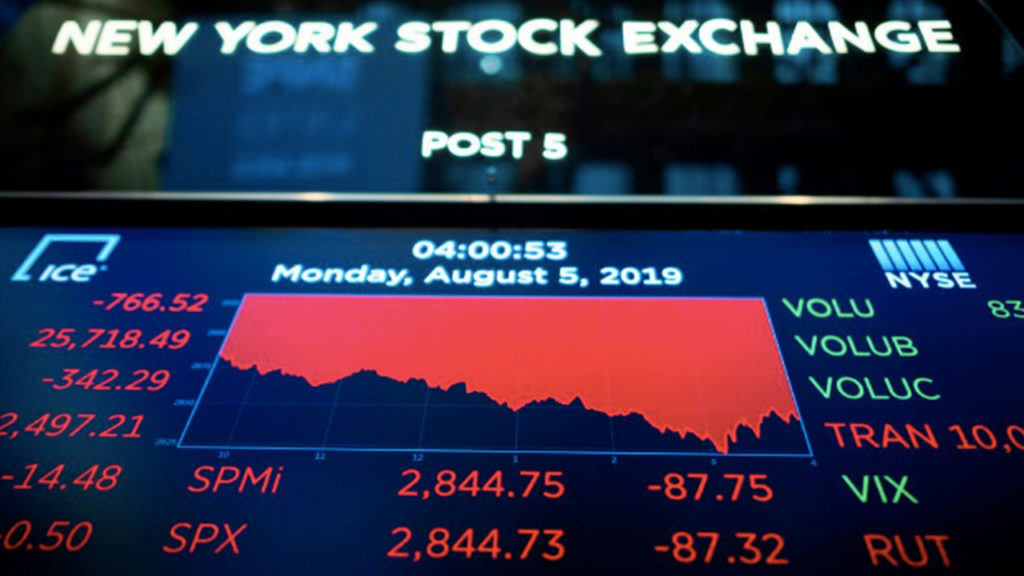 The trade war between the United States and China continues to heat up. On Monday, stocks dropped globally with the S&P 500 Index dropping by nearly 3%. Also on Monday, China allowed its currency, the yuan, to drop to an 11-year low of less than seven yuan to the dollar. Trump reacted by calling China a currency manipulator and saying that the US will ask the International Monetary Fund to take unspecified corrective measures. President Trump tweeted the following on Monday morning, “China dropped the price of their currency to an almost historic low. It’s called ‘currency manipulation.’ Are you listening Federal Reserve? This is a major violation which will greatly weaken China over time!” A few hours later, Trump treated the following, “China is intent on continuing to receive the hundreds of Billions of Dollars they have been taking from the US with unfair trade practices and currency manipulation. So one-sided, it should have been stopped many years ago!”

China’s reaction to the accusations was swift too, saying that it will stop purchasing US agricultural goods. China is the fourth largest purchaser of US agricultural products after Mexico, Canada, and Japan. All of this is happening in the wake of a 10% tariff that the Trump administration slapped on $300 billion worth of Chinese imports last week because no agreement could be reached with China on how to reduce the trade deficit that the US has with China. Also, China did not want to comply with US demands for changing its intellectual property policies. The new tariff is in addition to a 25% tariff that Trump already had in place since April on $250 billion worth of goods.

Joining me now to discuss the implications of these latest developments in the US-China trade war is Bill Black. Bill is a white-collar criminologist, former financial regulator and Associate Professor of Economics and Law at the University of Missouri, Kansas City. He’s also the author of the book, The Best Way to Rob a Bank is to Own One. Thanks for joining us again, Bill. So let’s start with the accusation that China is manipulating its currency. Would you agree with that assessment? It seems that for most reports, China actually temporarily stopped propping up the value of its currency and let it drop to more or less market value. What do you think about all of this?

BILL BLACK: Yeah, so when Trump says someone should have done something about currency manipulation years ago, guess what? They did. And the US actually brought this as a designation as a currency manipulator. And that was when China was actually probably manipulating its currency and it largely ceased to do so. To the extent it was involved at all in doing things, it wasn’t reducing the value of the currency. It was keeping it, as you say, slightly artificially high. They removed that support and it sank closer to what people think is probably a market rate. Indeed China promptly indicated that it would prevent further significant fall. So as Krugman says, Trump has managed to find the one area of trade abuse that China is not doing and claiming that that’s what their abuse is.

GREG WILPERT: So how would the value—How would lowering the value of the Chinese yuan help China? And why is Trump actually even upset about it?

BILL BLACK: Okay, so of course Trump says it will hurt China to devalue its currency. You should keep that in mind because in another tweet the same day he said that Powell, the Chairman of the Federal Reserve, had failed us again by failing to— wait for it— manipulate the US dollar by lowering interest rates so that we would lower the value of the dollar. And this is the competitive race of devaluation to see who can export more, which Trump says will hurt you. So why we would want to engage in a long-term race to hurt ourselves is beyond me. Why China would want to do it, if it really was going to hurt it, is beyond me.

And to cut through all of this, this is all the general Trump insanity. You recall his quotation, “Trump trade wars are easy to win.” Well, no, particularly if you take on somebody kind of like your own size, like China, which has a very proud, very nationalistic record as you would expect. And they say, “You know, f-you” to all of this. And say, you want to hit us, we’ll hit you back. And we’ll get you back harder and we’ll hit you back in ways that hurt you politically. And so Trump is in the middle of this infinite loop that periodically screws up the markets.

GREG WILPERT: I guess that the key is though that lowering the value of the yuan makes it easier for China to continue exporting to the United States because then the tariffs don’t hurt as much. Is that correct?

BILL BLACK: The tariffs hurt us, right? So when we put a tariff on, again, Trump can’t get the most basic things right. That’s a tax. When we put a tax on ourselves, that hurts our consumers. That’s A. But B, simultaneously what’s happening in the markets, the reason they’re so upset is not just the trade war, but because the yield curve is inverted. There’s a past show where I explained what all of that meant. But for now what’s important is that’s the not certain, but best indicator that a recession might be coming. And so, one of the things that increases the risk of a recession is a tax increase, which is precisely what Trump is doing.

GREG WILPERT: And according to this analysis that you’re presenting, how far off would a possible recession be? I mean, how long does it take to take effect, especially in light of the consideration that we’re facing a presidential election in 2020? And of course, Trump’s possible reelection will, to a large extent, depend on how the well the economy is doing.

BILL BLACK: Right. And the answer is, we don’t know. How soon an inverted yield curve produces a recession can vary. We can tell you this: the yield curve is now the widest it’s been since spring 2007. Anybody remember when that recession started? Officially it started in 2007. So that’s Trump’s concern because there’s inverted yield curves not just in the United States, but in Japan and through most of Europe. And a number of European economies have slowed greatly. The US has slowed. Japan has slowed. These are many of the world’s largest economies slowing. Who’s left? China, the one he’s getting into a fight with and raising taxes. So that actually increases the risk of recession instead of the other way around. He is—This is literally a case where there is one economist in the world that agrees with Trump and, of course, Trump hired him. He’s Peter Navarro and everybody else thinks he’s an absolute kook.

GREG WILPERT: Explain though for our viewers very briefly if you can, what an inverted yield curve is exactly.

BILL BLACK: Okay. So an inverted yield curve is when you have longer term government securities, like 10 years in this example. Normally the government has to pay us a higher interest rate to induce us to buy those 10-year bonds than say 90-day treasuries. And the reason is there’s increased risk over the 10-year period of inflation. And bonds fall in market value when inflation goes up. So that’s normally why a yield curve is positively sloped. The longer the maturity, 10 years versus 90 days, the higher the interest rates. When a yield curve inverts, the opposite occurs. Short-term interest rates are actually higher. Long-term interest rates are lower. Why would that be? The rational reason that would be is because people are anticipating a recession and recessions lead to sharp falls in interest rates in those circumstances. So in the long run, they’re anticipating not inflation because we’ll have a long, strong, greatest economy ever, but because we’re near the precipice and more likely to go into recession.

GREG WILPERT: Now, returning to the US-China trade conflict, China announced also, as I mentioned in the introduction, that it will no longer purchase US agricultural goods. Now, the federal government is already providing billions of dollars to US farmers to make up for the lost markets in China. Now, if this complete stop of US agricultural exports to China happens now, does that mean that these expenditures would have to increase and what does it mean long-term? I mean, could the US be losing Chinese agricultural market forever if China ends up finding providers elsewhere?

BILL BLACK: Forever is a long time, of course. So, but in the intermediate-term? Absolutely. If you start trade relationships with—Hey, guess who else produces soybeans Canada, right? Then it can be very hard to get those back for the US producers. On top of that, this is connecting with global climate change. So I’m in Minnesota and I teach in the fall in Kansas City and my wife works here. So I do a lot of driving on I-30 between Kansas City and Minneapolis, which is to say the grain belt of Iowa, Missouri and Minnesota. And the catastrophic flooding combined with China banning US imports – you have massive amounts of grain, soybeans in particular, that is rotting in the fields. And so it’s a huge loss.

And the Trump’s strategy is first we stab the farmers in the back, and then we say, “But not to worry, we’ll give you transfusions. But of course we won’t restore anywhere near as much as we’re taking away from you.” So farmers are going to be weakened. Some of them obviously will blame it on whatever Trump claims is the problem. But farmers are, actually in the modern era, quite good business people and a number of them understand that they’re the ones absolutely getting screwed in the United States by the Trump tariffs.

GREG WILPERT: Okay. Well, we’re going to leave it there for now. I’m speaking to Bill Black, Associate Professor of Economics and Law at the University of Missouri, Kansas City. Thanks again, Bill, for having joined us today.