Trump and Bolton’s strategy is to bait Iran into a war Bolton’s wanted for twenty years - says Trita Parsi, President of the NIAC

Trump and Bolton’s strategy is to bait Iran into a war Bolton’s wanted for twenty years - says Trita Parsi, President of the NIAC 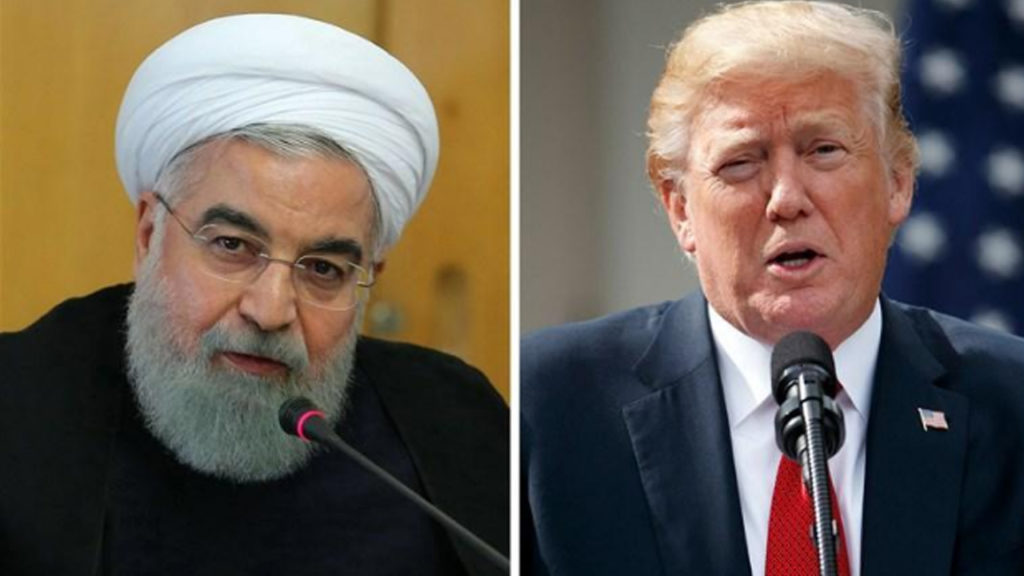 SHARMINI PERIES It’s The Real News Network. I’m Sharmini Peries coming to you from Baltimore. In violation of the Joint Comprehensive Plan of Action—that is, the nuclear agreement with Iran— the Trump administration announced that it will be imposing sanctions on all countries that import oil from Iran. Since Trump took office, his administration has been unraveling the agreement. On May 8, 2018, President Trump announced that the United States would withdraw from the JCPOA and reinstate US nuclear sanctions on Iran. A year later now, Iran is threatening that it will withdraw from parts of the deal and will resume the high enrichment uranium program. Uranium enrichment is important for Iran’s nuclear power plants, but according to the JCPOA, Iran agreed not to use the high enrichment since a byproduct of that enrichment is weapons-grade plutonium. Until now, Iran had shown great restraint hoping that other members of the JCPOA would convince the US to demonstrate restraint as well and honor the agreement. The EU’s High Representative for Foreign Affairs, Federica Mogherini, stressed the commitment of the EU to the JCPOA, despite the setbacks. Let’s listen.

FREDERICA MOGHERINI We continue to fully support the nuclear deal with Iran, its full implementation. We will have also today at the margins of the Foreign Affairs Council, a meeting between myself and the foreign ministers of France, Germany and the UK to discuss how to best continue to support the full implementation of the nuclear deal with Iran that for us remains a key pillar of security in our region. And it has been and continues to be for us a key element of non-proliferation architecture, both globally and in the region. We will continue to support it as much as we can with all our instruments and all our political will. This is very well known I think, both in Washington and in Tehran.

SHARMINI PERIES We should note that Russia and China have also issued statements calling on both the US and Iran to respect the agreement. On to talk about all of this with me is Dr. Trita Parsi. He is the co-founder and the current President of the National Iranian American Council. Trita Parsi is also the author of Losing an Enemy: Obama, Iran, and the Triumph of Diplomacy. Good to have you here, Trita.

SHARMINI PERIES All right, Trita. Let’s start off with what do you think is the explanation for Iran’s declaration that they will pursue enrichment of uranium? Why do they need it?

TRITA PARSI Well they’ve been pursuing the enrichment of uranium throughout this period. It’s just it’s been restricted, and it’s been with certain limitations. What they’re saying now is that they’re going to start to do away with some of those limitations as a result of the fact that the Trump administration has betrayed the agreement, walked out of the agreement more than a year ago, and is actually punishing countries for abiding by this agreement. This has created a bizarre situation in which Iran is actually under more sanctions now, when it actually is adhering to an international nuclear agreement, than it was years ago when it was accused by the United States of having violated one. So it was very clear from the outset that this was not going to be a sustainable situation. Iran cannot alone live up to this agreement while the United States is out of it and the Europeans are doing far too little to make sure that they’re living up to it.

SHARMINI PERIES Trita how much of this has to do with the US military presence in the Persian Gulf and this new destroyer carrier that has entered the Gulf recently?

TRITA PARSI I think that’s part of the bigger picture in which John Bolton is trying to provoke the Iranians to do something so that he can get the war with Iran that he’s been looking for, for more than 20 years. He’s, of course, presenting it as an effort to scare and deter the Iranians. I don’t think that has worked at all, but it has created a scenario in which everyone is now very worried that some form of an accidental war at a minimum is very likely because you have too many US forces and Iranian forces into too small of an area. And then you have John Bolton in the White House, who has a track record of lying, cheating and fabricating evidence in order to start wars.

SHARMINI PERIES And in terms of Trump’s team, especially since Bolton came on board, has been super aggressive at trying to not only provoke Iran into some sort of action like this to divert from the nuclear agreement, but also to get some sort of a reaction. Isn’t Iran falling into that trap?

TRITA PARSI Well, I think for quite some time, the Iranians were worried that if they didn’t react, they would walk into a trap. I think they reached a different conclusion now, which is that as long— the premise of their analysis, I think, is that they think that there is a significant difference between Trump and Bolton. Trump wants a negotiation and he has been bought into the idea that by doing maximum pressure on Iran, he can get to a negotiation. I think he’s wrong, but I think Trump genuinely believes that and I think that’s what the Iranians see as well. Bolton, however, is someone who has been very clear about his desire for war. And as long—And he’s using this strategy in order to get to a war. Now, as long as this current situation continues, the tension between Trump and Bolton is not decisive because Trump is not close to making a decision about going to war.

So all of the cost right now is on the shoulder of the Iranians, and Trump is not paying any cost at all. If, however, the Iranians restart their program and start to counter-escalating, this will come to a climax, a very dangerous climax. But at that point, this is no longer cost-free for Trump because if he doesn’t want war, he needs to change his strategy and the tensions between him and Bolton will come to the forefront. If he then fires Bolton because he doesn’t want to have a war— in particular, take a look at what he’s saying about Bolton when it comes to Venezuela. He feels that he’s been led into a corner by Bolton on Venezuela. Well he’s being led into a corner on Iran as well by Bolton. So if these tensions become high enough and he fires Bolton, then suddenly you will have a new situation in which perhaps the possibility of some form of de-escalation will be made possible. It’s a very risky strategy and is a very dangerous strategy. The difference I think is, though, that the Iranians view the current situation as only being costly to them. The scenario that I just painted now as a result of them counter-escalating, is one in which both the US and Iran will have a cost, and that may then change the dynamic in a way that the incentives for de-escalation will increase.

SHARMINI PERIES Trita, not only is the European Union concerned about this, but Russia and China have also issued a statement urging the US and Iran to honor the agreement and stay on course here, but the US has already pulled out. How is this kind of statement even effective?

TRITA PARSI Again, it’s going back to what I said earlier on. This is a bizarre situation and I think if the Iranians are being betrayed and punished right now, it is the Europeans that are being humiliated by Trump because what he has done is that he’s revealed that they are truly and utterly powerless because they keep on giving strong political statements in favor of the deal. I personally believe that they genuinely want to keep it, but they’re not putting any political muscle and spine behind those statements and privately they say that they simply don’t think that they can because of the way that their economy is so dependent on the United States. Well if that is the case, then that means that Europe truly is nothing more than an appendix to the US, and as a result, no longer much of an actor. So whether the Iranians have the Europeans on their side or not, actually ends up being rather irrelevant if the Europeans cannot deliver, if they cannot make them being on the side of this agreement actually have any practical implications.

SHARMINI PERIES And finally, Trita, what is the internal political dynamic in Iran like over this? Is it afraid of looking weak if they continue to stay in the JCPOA?

TRITA PARSI I don’t think it was the fear of looking weak. I think it was the fact that Trump kept on escalating, the Europeans kept on giving promises, but the Iranians were not getting anything. Ultimately, not only would that be bad for them from a strategic standpoint, but also politically at home. It was just very difficult for the government to sustain a line of patience while Trump is escalating uncontrollably, and the Europeans are doing absolutely nothing to provide Iran with the economic benefits that they were promised.

SHARMINI PERIES All right, Trita, we’ll leave it there for now. I thank you so much for joining us today.

TRITA PARSI Thank you for having me. Appreciate it.