White collar criminologist Bill Black analyzes the New York Times investigation into Trump's tax evasion and argues that if true, these would be considered felonies. However, he will probably never be held to account for this, before he leaves office

White collar criminologist Bill Black analyzes the New York Times investigation into Trump's tax evasion and argues that if true, these would be considered felonies. However, he will probably never be held to account for this, before he leaves office 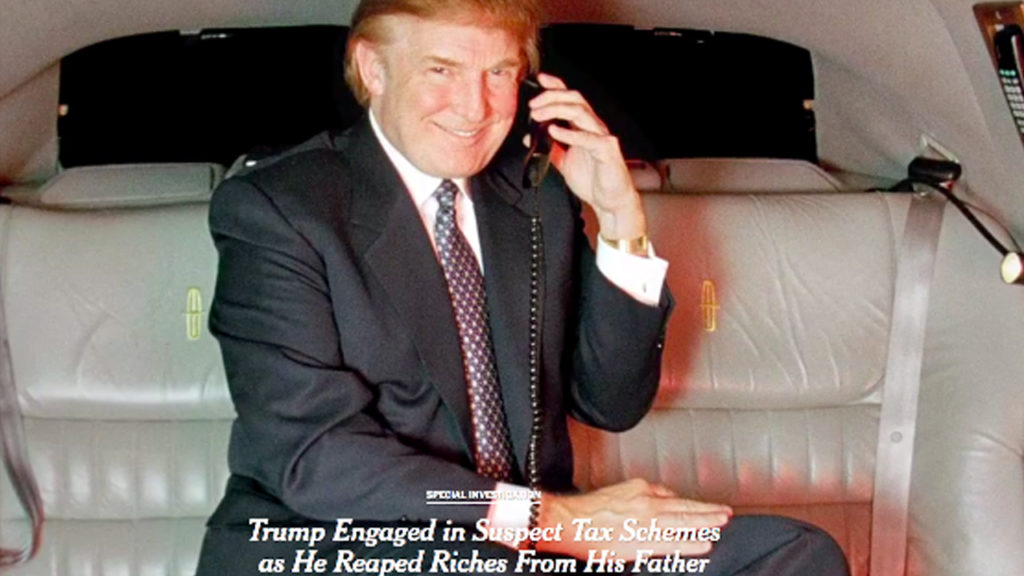 GREG WILPERT: It’s The Real News Network, and I’m Greg Wilpert coming to you from Baltimore.

The New York Times published a major investigation into Trump’s family tax history last week. According to the New York Times, the Trump family became rich thanks to extensive tax evasion. Fred Trump, the late father of Donald Trump, transferred about a billion dollars to his children for which practically no estate tax or gift tax were ever paid. Although Trump built a rags-to-riches myth around himself and claims to have made his fortune on his own, the Times revealed that he received a $200,000 annual salary already when he was only three years old.

During the debate with candidate Hillary Clinton in 2016, Trump mentioned offhand that the fact that he didn’t pay any federal taxes makes him smart.

HILLARY CLINTON: The only years that anybody’s ever seen were a couple of years when he had to turn them over to state authorities when he was trying to get a casino license, and they showed he didn’t pay any federal income tax.

DONALD TRUMP: That makes me smart.

HILLARY CLINTON: So if he’s paid zero, that means zero for troops, zero for vets, zero for schools.

GREG WILPERT: Joining me now to discuss the New York Times investigation into the Trump family taxes is Bill Black. Bill is a white collar criminologist, former financial regulator, and associate professor of economics and law at the University of Missouri Kansas City. He also is the author of the book The Best Way to Rob a Bank Is to Own One. Thanks for joining us again, Bill.

GREG WILPERT: So let’s start with Trump’s claim that he’s a self-made billionaire. Given what we know from the New York Times investigation, is there any evidence that would support this claim?

BILL BLACK: There is every evidence that the claim is, and I know this will shock people, a lie. First, he’s not self made. Second, it’s entirely due to the money he got from Dad. Indeed, if he had taken the money he got from Dad and simply put it in a Vanguard account, he really would have well over $10 billion today. Instead he’s a terrible real estate developer. So he lost money and defaulted on all kinds of loans, which also, by the way, he said made him smart, that all the great ones in real estate stiff the creditors; you know, including the banks and the workers who don’t get paid for doing these things. So it’s lie upon lie upon lie.

GREG WILPERT: So how did Trump and his family avoid paying taxes? The New York Times has a video, actually, of one of those methods, known as GRAT, and we’ll show it here.

NYT Video: GRAT. A trust designed to pass wealth between generations. In 1995, Donald Trump and his siblings began to take ownership of most of their father’s real estate empire, while avoiding hundreds of millions of dollars in taxes. The siblings bought the assets with money from their father’s businesses, and Mom and Dad gave them the rest. When the GRAT transfer was completed in 1997, the Trumps claim that those 6,500 apartments were worth just $41 million. Eight years later, the same properties sold for more than $670 million, meaning the Trumps avoided paying hundreds of millions of dollars in taxes.

GREG WILPERT: So that’s one of the methods. Are there any other significant tricks and methods with which Trump evaded taxes? And are they, including the GRAT scheme that was just described, are they even legal?

The first one you heard was appraisal fraud. And the context of all of this is it’s happening- the time period when the Tumps are doing this overlaps with the savings and loan debacle, where the same mechanism was infamous, and where we sent scores of appraisers and the senior officers from the savings and loans on the other side of the transactions to prison for these kinds of felonies. And basically the scheme is simply to violate the appraisal rules and to, in this case of the Trumps, it was to massively understate the value of the assets, sometimes 11 days after they had just done the opposite. So it was not exactly a smooth scheme.

So you can prosecute successfully these frauds. We know because we did it. And It’s the same way, because there actually are appraisal rules on what you need to do to appraise properties. And while there is judgment, these kinds of absurd appraisals wouldn’t pass any smell test. And so I want to piggyback on John Henry’s very good interview with Real News Network where he explains how the IRS has deliberately been rendered largely ineffective, and in particular against the most wealthy frauds. So that’s what’s going on in that sphere.

GREG WILPERT: So as a white collar criminologist, can you tell us just how extreme you would say the Trump family’s tax evasion is compared to other wealthy families? Also, how many of the billionaire class could you legitimately say, given what we know, are legitimately self made versus inherited, versus stolen, or through fraud or tax evasion?

BILL BLACK: So this is the famous French saying, behind every great fortune that can’t be explained lies a great scandal. And a recent survey in the tax context that followed up with the Panama Papers found that at least 25 percent of the cases were outright fraud. Now, the other 75 are incredibly abusive. And again, what’s going on is partly what John Henry talked about, in terms of the deliberate destruction of the IRS’s ability to go after folks. But also because the IRS leaves all kinds of gray areas that only the ultra wealthy are able to exploit. And they are only able to exploit them to the extent they get unethical lawyers. So we ought to be closing that. And if the Democrats get back in control of the House and eventually the presidency, that should be a real priority. And we should bring all kinds of transparency to it, of just what an incredible surge we’re going to get in revenue from all of that. It’s really tax effective to go after these cheats, and it creates, of course, a vastly fairer system as well. So that should be a priority.

Let me tell you the other scam that was going on, though, because this is a scam that’s used all the time internationally, and particularly by U.S. corporations to avoid corporate income tax. It’s called transfer pricing, which doesn’t sound all that much. But what it means is either they deliberately understate or overstate costs dramatically. Take an obvious example. Ireland. Ireland has an extraordinarily low tax rate for corporations, 15 percent. Plus there are scams off of that. But let’s just take the 15 percent.

If I’m Apple, I want my revenue, my profit, to be recognized in my Ireland operations so that they will be taxed at this very low rate. So what do I do? I buy all these components from China, and then I bring them to Ireland. And basically I sort of, you know, put a case on it, and a label, and I claim that a huge portion of the profits are attributable to putting this label, you know, the Apple label on it. And then I only pay 15 percent as opposed to in the old days, you know, in the 40 percent range, of taxes on that revenue.

The Trumps did the same thing. What they did is massively overcharge Dad’s companies for their services. Now, they weren’t providing real services, either. It was a scam upon a scam upon a scam. But it dramatically reduced Trump’s Dad’s profits. And then, remember, he is someone who makes his money from the public, through all these rental assisted housing for poor people. And he used the fact that he was now paying these much, much, much higher costs to his kids, where they were literally raising the cost by 300 percent, 400 percent, 500 percent, as his excuse for rent increase on these rent controlled dwellings.

So they were- again I emphasize it isn’t genius that explains these kinds of frauds. It’s audacity. And the Trump family simply exemplifies this combination of incompetence, moral degeneracy, but with just extraordinary audacity.

GREG WILPERT: So what can be done now with the information that we have from the Times? I mean, Fred Trump died in 1999, and Donald Trump cannot be indicted for tax fraud crimes which were committed when he was three years old. On the other hand, there is no time limit on federal crimes for tax fraud. Is there any legal recourse to hold Trump responsible or accountable for the tax evasion that happened?

Yes. Accountable in a civil sense, as you say. Not criminally, even though there were myriad crimes committed that were all felonies. But yes, they could get- and New York could do this. New York attorney general could bring the action, and could potentially get at least many tens of millions of dollars in recoveries from all of, basically the living Trumps. But most assuredly it could get tens of millions, scores of millions, from the president of the United States, were it to bring the action vigorously and effectively. And it’s going to be the great gut check right now for the newly elected AG in New York whether she’s going to do that, or when she’s elected officially.

GREG WILPERT: Right, we don’t know the result of that yet for another couple weeks.

GREG WILPERT: I was speaking to Bill Black associate professor of economics and law at the University of Missouri Kansas City. Thanks again, Bill, for having joined us today.

: The Costs and Consequences of American Empire (Macmillan)