The two sides may have been close to making an important agreement on denuclearization and lifting sanctions. It's not clear what went wrong, but it seems that hardliners prevented an agreement, says Tom Collina of Ploughshares

The two sides may have been close to making an important agreement on denuclearization and lifting sanctions. It's not clear what went wrong, but it seems that hardliners prevented an agreement, says Tom Collina of Ploughshares 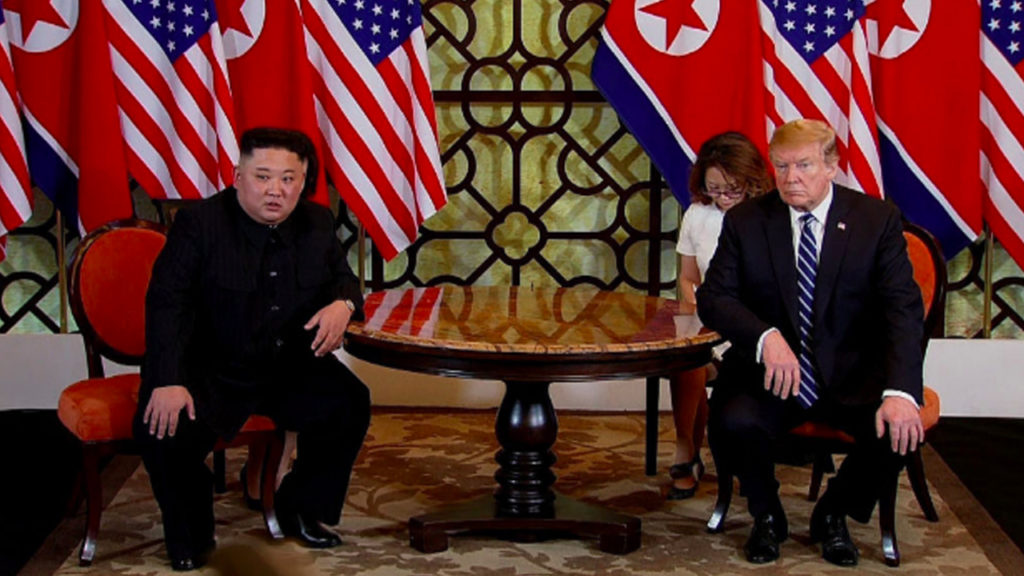 President Donald Trump abruptly cut his summit meeting short with North Korea’s leader Kim Jong Un on Thursday. The two were meeting in Vietnam to sign an agreement for the denuclearization of North Korea in return for lifting economic sanctions on North Korea. President Trump explained the failure of the talks in a press conference before he returned to the U.S. Here’s what he had to say.

DONALD TRUMP: Basically, they want the sanctions lifted in their entirety, and we couldn’t do that. They were willing to de-nuke a large portion of the areas that we wanted, but we couldn’t give up all of the sanctions for that. So we continue to work, and we’ll see. But we had to walk away from that particular suggestion. We had to walk away from them.

GREG WILPERT: So joining us now to analyze these talks is Tom Collina. He’s director of policy at Ploughshares Fund in Washington, D.C., and has 30 years of experience in nuclear weapons policy and research. Thanks for joining us today, Tom.

TOM COLLINA: My pleasure to be here. Thank you.

GREG WILPERT: So as we saw in the clip just now, President Trump said that the talks fell apart because the U.S. could not lift the sanctions in their entirety, as North Korea wanted. What’s your reaction to this argument?

TOM COLLINA: Well, it’s unclear whether President Trump’s version of the of what happened in Hanoi is consistent with what the North Koreans think. From President Trump’s perspective, the North Koreans offered closing nuclear facilities at their main site in Yongbyon, which would be very significant. In exchange, the North wanted the United States and the international community to remove all sanctions. That would have been a difficult trade, because you’re getting partial nuclear progress for all of the sanctions relief.

But that’s not the way the North Koreans portray it. They say that they asked for partial sanctions relief, and were willing to give partial closure of their nuclear facilities. So it appears that the two sides were much closer than President Trump’s version of the story would appear, and that makes it a real shame that they weren’t able to strike a deal in Hanoi, because it seemed like there was a good chance of having one on the table.

GREG WILPERT: Is there any indication as to why President Trump then withdrew, if the deal seemed to be closer? I mean, what was behind the scenes? Any idea as to what might have happened?

TOM COLLINA: There’s only speculation. For example, we know that President Trump, you know, sees himself as a deal maker. And part of the way he strikes deals is to up the ante and see if he can’t get more at the last minute. So it’s possible that they had a deal more or less scoped out, and Trump asked for something unexpected at the end, and the North said no, and Trump walked away. It’s also possible that they had a deal, and President Trump’s National Security Adviser John Bolton, who has long been opposed to diplomacy with North Korea, might have somehow squashed the deal at the last minute.

It’s also possible that North Korea perceived President Trump to be weak, given the political problems he’s having here in Washington with the Mueller investigation, the failure to build the wall, the testimony on Capitol Hill with Michael Cohen. They might have thought they were in a good position to push a maximalist position on Trump, which he then rejected. So any of those things are possible, and hopefully at some point we will know. But at this point it’s speculation.

GREG WILPERT: So what would you say needs to happen for relations between North Korea and the U.S. to be normalized?

TOM COLLINA: Well, normalization is a key part of this. One piece of this would be to end the war. It’s sort of a technicality, but the Korean War, from 1950 to 1953, technically is still going. There was an armistice, but there was never a peace agreement. So one of the things that hopefully was going to come out of the Hanoi summit was a declaration to end the war. And then that will be a first step towards a peace treaty, or peace regime that would bring the two countries–enable the two countries to have a more normal relationship, where they wouldn’t technically be at war with each other.

And then, of course, solving the nuclear problem, getting some roadmap and some shared approach to how the North will reduce its nuclear weapons arsenal, would be very helpful. And in exchange for that, the West and the United States need to provide some kind of sanctions relief for the economic sanctions that are on North Korea right now.

And all of elements were on the table in Hanoi. And you just get the sense that if there was more political will to make it happen, it could have happened.

GREG WILPERT: Now, in the U.S., Trump has often been criticized for suggesting that the U.S. should actually withdraw its military forces from South Korea. Here’s a clip from the other day where MSNBC commentator Andrea Mitchell argues in favor of the U.S. presence in South Korea.

ANDREA MITCHELL: One other thing that I thought might be disturbing to South Korea and to the U.S. military is the President casting shade on the joint military exercises. Those are key to readiness, so they usually take place every spring. And he said that they would be suspended. When asked about them, he said “You know, they are a waste of money. They cost $200 million. We don’t get reimbursed. Wargames are nice. We play wargames.” He really diminished the importance of those joint military exercises, which are very important for readiness to both sides. And now there’s a real question as to whether they will take place.

GREG WILPERT: What’s your response to Andrea Mitchell and to the issue of military maneuvers in South Korea?

Essentially what we have right now is a safe space, if you will, where the United States has suspended the military exercises in exchange for North Korea suspending missile and nuclear testing. That is the sort of essential status quo condition that allows the negotiations to take place. If either side breaks that status quo, I think things will go south very quickly.

GREG WILPERT: Now, finally, some members of Congress are mobilizing in favor of a peace resolution with North Korea. Tell us about this effort, and who is leading it.

TOM COLLINA: Congressman Ro Khanna from California has taken the lead on this. The idea is to try to build some support in the U.S. Congress for a peace resolution, for a declaration to end the war, the Korean War, and to build support for a peace treaty between the United States and Korea. And it’s–I think it’s a useful thing to be happening alongside the negotiations to end the North Korean nuclear program to make the point that this isn’t just about nuclear weapons. It’s about creating a more peaceful, normalized relationship with North Korea. Because until we have a normal relationship with North Korea, they will not feel able and confident to give up their nuclear weapons. We sometimes forget that the reason North Korea has nuclear weapons is that they fear an attack from the United States. They distrust U.S. intentions. So to make North Korea feel confident that they will not be attacked is essential for them to be willing to give up, eventually, their nuclear arsenal.

GREG WILPERT: We’re going to have to leave it there. I was speaking to Tom Collina, director of policy at the Ploughshares Fund. Thanks again, Tom, for having joined us today.

TOM COLLINA: My pleasure, thank you.