At the Singapore summit, President Trump announced a halt to U.S. war games on the Korean peninsula and said he wants to withdraw American troops. But if he does, he'll face stiff resistance from Congress and Pentagon, warns author James Dorsey

At the Singapore summit, President Trump announced a halt to U.S. war games on the Korean peninsula and said he wants to withdraw American troops. But if he does, he'll face stiff resistance from Congress and Pentagon, warns author James Dorsey 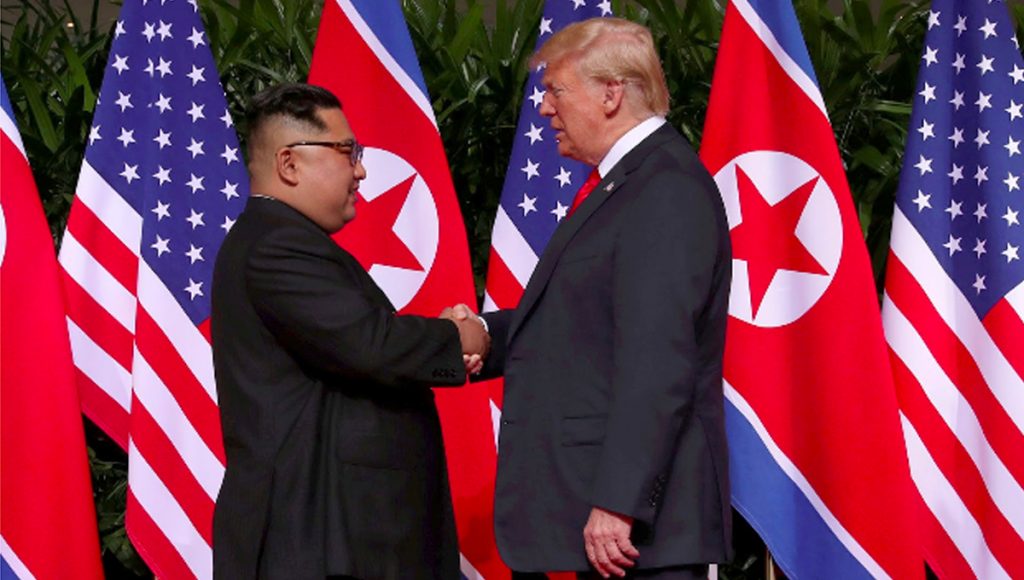 AARON MATE: It’s The Real News, I’m Aaron Mate. The sight of a U.S. president meeting with a North Korean leader was a historic first, but also historic was President Trump’s pledge to halt U.S. war games on the Korean peninsula.

DONALD TRUMP: The war games are very expensive. We pay for a big majority of them. We fly in bombers from Guam. I said it when I first started, I said, “Where do the bombers come from?” Guam, nearby. I said, “Oh great, nearby, where’s nearby?” Six and a half hours. Six and a half hours, that’s a long time for these big massive planes to be flying to South Korea to practice and then drop bombs all over the place and then go back to Guam. I know a lot about airplanes. It’s very expensive and I didn’t like it. And what I did say is- and I think it’s very provocative. I have to tell you, Jennifer, it’s a very provocative situation when I see that and you have a country right next door. So, under the circumstances that we are negotiating, a very comprehensive complete deal, I think it’s inappropriate to be having war games.

AARON MATE: That President Trump speaking to reporters shortly after he met with Kim Jong Un in Singapore. Now, an end to U.S. war games has been a key North Korean goal for years. And with that as a starting point, will the two sides reach the ultimate goal, peace and complete denuclearization? And if they do, then here’s another question. What could peace on the Korean peninsula mean for Trump’s other priorities, including confronting Iran and also a trade war with China.

Well, joining me from Singapore is James Dorsey. He is an author and senior fellow at the Rajaratnam School of International Studies in Singapore. Welcome, James. Let’s start with this pledge from Donald Trump to halt U.S. war games, in fact, the only real, verifiable concrete pledge to come from the summit. Otherwise, the sides committed to nuclearization, but the details of that will have to be worked out. Here though, Trump has actually pledged to stop doing what North Korea has has been wanting the U.S. to stop doing for a long time, which are these massive war games on its borders. Your thoughts on that commitment?

JAMES DORSEY: If you look at the whole picture, you have a lot of declarations of intensity with no meat on the skeleton. What the state does not have, which were key words that the Trump administration wanted, with other words, a verifiable, irrevocable denuclearization. Obviously, Kim did not concede of the words verifiable and irrevocable. And on the other hand, you have this give-away, a give-away that is certainly not going to go down well with U.S. allies, South Korea and Japan, and most probably is going to be problematic for the Pentagon. So, it’s not quite clear why this was given away in exchange for basically nothing.

AARON MATE: Why do you think it was given away, and I mean, do you object to the fact that it was?

JAMES DORSEY: What I think we’ve seen today is really the way Trump approaches negotiations and international relations. You look at the press conference that he gave, an hour long press conference, which was far more friendly than many of his other press conferences and encounters with the media, which he was clearly basking in the fact that he was on the world stage and he was the world’s puppeteer.

Now, the other thing is that he clearly believes, very firmly, with an enormous self-confidence, in his ability to instinctively understand what the other party wants, and that his personality inspires enough confidence for him to make agreements or understandings without any any indication that he can ensure that they are going to be implemented. I’ll give you one example. He talked about, at the last minute, having agreed with Kim on the destruction of a engine-testing site. He didn’t bother to put that in the declaration. So, all we have at this point is his word for it. We have no idea what Kim’s view of it is. And there is no written record of this.

AARON MATE: Let me go to a clip from MSNBC last night. There was a lot of laments on corporate media coverage about the summit, decrying the fact that Trump was treating Kim Jong Un as an equal, flying the flags side by side at their ceremony. And a former NATO commander was speaking to MSNBC. His name is James Stavridis, and he was talking about the reasons for this massive U.S. troop presence in South Korea that President Trump has appeared to put on the negotiating table.

JAMES STAVRIDIS: We got to remember, our troops are there not as an act of good will to South Korea, they are there to enhance U.S. influence in the region, to ensure that we keep those sea lanes of communication open, that our trade can flow freely, that we have a voice in the events there, for the exact same reason that we still have about fifty thousand troops in Europe. They’re not there as an act of good will, they’re there to accomplish U.S. National security objectives. So, we draw them down at risk to those objectives. And it is very shortsighted to say, “Oh, yeah this will be a two-for, we can reduce tension and save some money by getting our troops off the peninsula.” Not the right way to think about this one.

AARON MATE: So, that’s former NATO Commander James Stavridis in a moment of candor last night on MSNBC, saying that the U.S. has massive numbers of troops in South Korea, not as an act of goodwill, but he says it’s for the national security interests. If you notice the reasons that he explains for what those interests are have nothing to do with security. He talks about having a voice, having influence, opening up seawards. So, do you think that for the Trump aministration, this massive troop presence inside the peninsula is negotiable? Trump, the way speaking today, talked about wanting to bring them home.

JAMES DORSEY: Well, I think it’s certainly, for Trump, negotiable. I think he’s made that very clear. Whether for the administration it’s negotiable, we’ll have to wait and see. I wuold think that the Pentagon, and maybe even the State Department, are not that happy with this. I also think that beyond the former NATO commander has said, is that there’s an issue here of the reliability of United States if it suddenly backs out of military commitments that it’s made to its allies, and does so unilaterally.

AARON MATE: Right, okay. And so, in terms of looking at this from a skeptical point of view, certainly on the Korean peninsula you have massive, overwhelming support, something like eighty percent of the population supports peace, supports denuclearization. And that’s obviously a laudable goal. But in terms of what cynical aims might be behind this, from the point of view of the Trump aministration, which has a very different agenda than North Korea and South Korea have- what do you think this deal could do when it comes to Trump’s designs, when it comes to Iran?

He’s just pulled out of the nuclear deal. And also with China, because just before the summit, he basically launched this trade war, issuing a series of demands, including a reduction of the trade imbalance by tens of billions of dollars, demands that are obviously nonstarters for China. So, how could a possible peaceful outcome on the peninsula impact Trump’s other goals?

JAMES DORSEY: Obviously, if he pulls off denuclearization with Korea, then that strenghtens his argument of taking a much firmer line toward Iran and walking away from the current nuclear agreement. That’s a big if. Whether the Iranians are going to buy into that remains to be seen. What I think it may do is give him license to take an even more agressive attitude towards Iran. With regard to China, he’s going to need China in any denucleariation process with North Korea. And North Korea remains a major influence in- sorry, China remains a major influence in North Korea. So, I think that, in terms of what Trump is going to do in China, may be less than meets the eye.

AARON MATE: And the massive U.S. troop presence in South Korea, how much of a factor do you think China is in the U.S. deliberations over keeping those forces there.

JAMES DORSEY: Again, obviously, thin Trump thinking, not that much. He’s been willing to basically give this away. In fact, you know, the pledge not to hold military exercises can be read as a first step towards withdrawal of U.S. forces. I think that what you’re going to see is a lot or resistance, both within Congress, as from the parts of the administration, from people in the Pentagon, against a template with military exercises, let alone the withdrawal of U.S. forces. Obviously, if the United States were to withdraw from the Korean peninsula, this would be doing exactly what China wants, exactly what North Korea wants.

AARON MATE: Right. In terms of Congress, it’s worth remembering that when President Clinton reached, with North Korea in the 90s- a Republican controlled Congress made it difficult for him to implement the agreement that he reached. And Under President Bush, certainly, Republican lawmakers supported his efforts to pretty much abandon the framework that Clinton had started. James Dorsey, final thoughts as we wrap?

JAMES DORSEY: I think that’s probably true. One’s got to be a little bit careful because, of course, in the in the Clinton period, you would be deeaing very much with Congress at a White House it which partisan politics plays a very major role. At this point, of course, we’re dealing with a Congress that’s Republican with a Republican president. And I think with a Republican president, we’re going to find that there’s a lot of different thinking on the way the Korean problem coud be approached.

AARON MATE: We’ll leave it there. James Dorsey, author and senior fellow at the Rajaratnam School of International Studies in Singapore. Thank you.