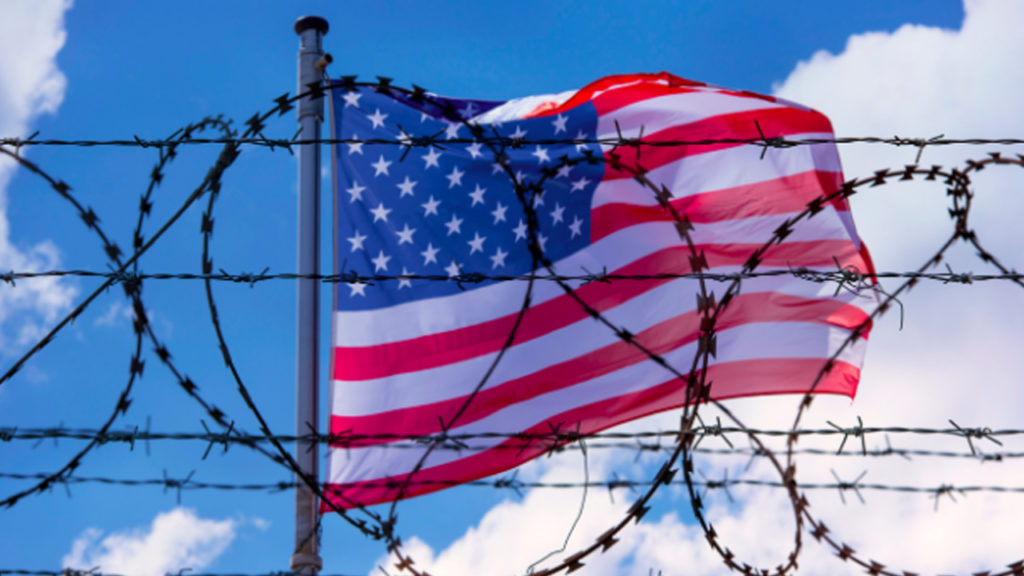 Donald Trump and his administration have unilaterally published what they’re calling an “interim final rule” in the Federal Register, which will make it almost impossible for asylum seekers to qualify for safe haven in the United States if they fail to request amnesty from their home countries or didn’t in transit. This will only be implemented it seems on the southern border for Central Americans. It may break international law and UN agreements as well. This has led to lawsuits from the ACLU, the union that represents asylum officers, and numerous immigrant rights groups.

We are joined now by Angelo Guisado who is Staff Attorney for the Center for Constitutional Rights, one of the other plaintiffs in this case where he represents the latest asylum seekers, asylum ban cases that happened before, and the port of entry metering case. And Angelo, welcome. Good to have you with us here.

ANGELO GUISADO Thank you for having me.

MARC STEINER So this is, you know, they’ve been trying to stop this for a while— clearly, the Trump administration. But this particular way of stopping saying—Look, let me let you explain it to our viewers exactly what they did, and why it may violate not only US law as it stands now, but even international law through the UN.

ANGELO GUISADO Sure. So on Tuesday, the Trump administration published what’s known as an interim final rule— pretty oxymoronic— but it has the effect of denying asylum seekers the right to apply for asylum if they had not applied through any country that they first passed through. So the prototypical situation is: a Central American flees one of the Northern Triangle countries, passes through Honduras, Guatemala, Mexico, gets to the southern border, asks for asylum in the event that they’re able to actually get processed— which is the subject to a number of other lawsuits— then if they did not first apply for asylum either in Mexico or Guatemala or any other country through which they ventured to get to the border, they are rendered ineligible for asylum. And that violates US and international law for a number of reasons.

MARC STEINER So let me ask—Let’s stop there for a moment, before I get to another — How does it violate our own laws in this country and international law? I think that needs to be explained.

ANGELO GUISADO Sure. So the founders of this country were very clear that they wanted a separation of powers and certain checks for the different branches. We leave our legislative prerogative to Congress, Congress writes the law, and the executive signs it, and the judiciary decides whether it’s constitutional or not. In this instance in 1980, when Congress passed the Immigration Nationality Act-Refugee Act they made a number of provisions governing what happens to an asylum seeker when they pass through other countries, right?

So one provision is called “firm resettlement,” which deals with what happens when an asylum seeker plops down, lives happily, and is safe in a third country. They’re then not allowed to apply for asylum because they are already settled in another country. And the other is called the “safe third country agreement,” or “safe third party,” and that’s an instance in which an asylum seeker gets to a place like Canada where we have a bilateral agreement to say that Canada as well as the United States are safe. The asylum seeker can’t pick which country to go to. They have to apply in whichever country they get to first. The thing is, we have no safe third country agreement with any of the Central American countries or Mexico.

MARC STEINER So what does that mean though? So if we have no agreement with those countries, then how’s that law to apply to people coming through Mexico into the United States? Where’s the contradiction?

ANGELO GUISADO Right. Well the contradiction is that many of those places are indeed not safe, and that’s the reason why we don’t have a safe third-party agreement. So if an individual goes to Guatemala, for instance, with whom we don’t have an agreement, a country which struggles on its own to provide human rights protections, which only affords maybe a hundred asylum applications a year. The administration’s decision to force that person to apply in Guatemala first is illegal because Congress already thought of that. Congress said you either, A, have to have a safe third-party agreement or, B, have to be firmly resettled in that country. Where neither scenario is present, as is the case for the tens of thousands of asylum seekers currently waiting in our borders, you can’t force them to apply in a country that either, A, doesn’t have a safe third-party agreement or, B, the asylum seeker hasn’t firmly resettled there.

MARC STEINER So one of things that’s interesting about that, I don’t know how this applies. I’m very curious. There was an article in Common Dreams that I read earlier today about asylum seekers and we’re going to—It was a tweet and this tweet was from somebody who worked with them. And you’ll see it here on the screen, but I want to read it to you. “This is the Salvadorian woman who was allegedly shot and killed by Mexican police. Maria Senaida Escobar Cerritos, 19. She was on her way to visit her father in Santa Cruz,” and was killed when police opened fire on a bus. “Days after Mexico launched its immigration crackdown, a truck full of immigrants came under fire…” and “the assailants were the police,” according to these two tweets that came out. So, I mean, given what Trump has done pressuring Mexico, Mexico has become— maybe already was— an unsafe country for these immigrants. Is that part of the argument?

ANGELO GUISADO I mean, it certainly is. There’s a reason that the Department of State has a “do not travel” warning to at least a dozen states, many of which I ventured to and I indeed felt unsafe. And it’s very unsafe for migrants, especially in the critical bordertowns. I’m not here to malign Mexico.

ANGELO GUISADO I think the United States has done enough harm to migrants, so we don’t need to harp on what Mexican officials have done. But one of the key things is, as you mentioned, yes, these aren’t safe areas. The United States Department of State won’t send its employees to these countries or to these states in Mexico. Why should we expect asylum seekers to have to apply for asylum in areas in which they don’t feel safe?

MARC STEINER So we have the other day Attorney General William Barr who likened, he said the surge of asylum claims in the US on the border was “forum shopping by applicants attempting to exploit American generosity.” And so, I mean, this is clearly a political move on the part of the Trump administration, but going back to what you were saying earlier, violating federal rule-making that seems to prohibit them from doing that with the Immigration Nationality Act. So how do you think this is going to go? I mean, you have Lee Gelernt, the ACLU Attorney, who said it clearly violates domestic and international law and cannot stand. But given the court system today, can it stand? What do you think will happen here?

ANGELO GUISADO I don’t think so and I’m loath to contradict my co-counsel, Lee, who is an absolute brilliant lawyer.

MARC STEINER He is that.

ANGELO GUISADO Yeah. And who will argue next week on a temporary restraining order that this interim final rule indeed does violate the INA and other federal laws, as we argued the first time during the first asylum ban. If you recall earlier in April, they released a similar rule in which anyone who crosses in between ports of entry “illegally” would be denied the ability to apply for asylum. That got struck down quickly both at the district court level and at the 9th Circuit. And despite the Trump administration’s decision to flood the federal courts with Republican and Federalist appointees, I think the point remains that federal judges will apply federal law fairly, carefully and accurately. And under any parsing of what the government’s done here, no judicial scholar would allow that to stand.

MARC STEINER I think the Trump administration has already accused you of shopping for the right courts by filing in California, so you’re shopping, the immigrants are shopping, everybody’s shopping. [laughs].

MARC STEINER So talk a bit about, as we close—You’re going to the border tomorrow. What work will you be doing there?

ANGELO GUISADO I’m heading to the border this weekend to help assist migrants who are vulnerable, desperate, in a state of crisis, and they have to navigate very complicated immigration laws in both the United States and Mexico. And of course, these individuals are scared, destitute, and have been marooned—  languishing on the other side of the border because of the United States policy. Much of my work will be able to quell fears about this potential rule, but also to properly advise people what their rights are. Also, to listen. I think one of the things mainstream media, sort of, ignores are what these people go through just to even get to the border, and that the administration rejects that, and instead is forcing them to seek safety and safe haven in very dangerous border towns— prey to cartels, extortion, assaults, a whole panoply of evils. It’s really just another instance of how craven and evil this administration is.

MARC STEINER Well, let me ask you a question on the heels of that as we close because I think it’s an important question given what you just said. I mean, you’ve been doing this for a while I take it. And so, what’s the essential difference between how you are fighting these cases now with the Trump administration, and what came before that with Obama or even the Bushes?

ANGELO GUISADO Well, I mean, it’s on record that Obama deported more people in history than any other president.

ANGELO GUISADO Of course, George Bush started the Department of Homeland Security, which if you look at actually how it’s phrased, I mean, there is no homeland security threat at the border. These are poor, penniless, migrants who seek safe haven. There’s a reason that we ratified the 1951 UN Refugee Convention, and the 67′ Protocols, and passed the 1980 Refugee Act. It’s because we weren’t up to code with the international human rights standards and Congress decided in 1980 that we had to be. And under Obama things were bad, yes, but they weren’t this bad. We did hear instances of turnbacks, we did have to sue on their detention conditions, but what the Trump administration is doing now is proto-fascism.

MARC STEINER And we need to, kind of, conclude this but every time you say something, I have to ask you one more quick question. I’m sorry. I mean, define as an activist and as a lawyer what you mean by “proto-fascism.”

ANGELO GUISADO We have in office a despot who’s increasingly set on consolidating power within a small group of cronies, his band or retinue of officials who are intent on consolidating power and violating the law at every step of the juncture. They have no respect for process. In fact, that’s why this is an interim final rule and not passed with the proper notice and comment. And they have no respect for the rights of those who look different from them.

ANGELO GUISADO Thank you for having me.

MARC STEINER Good to have you with us. And I’m Marc Steiner here for The Real News Network. Thank you all for joining us. Take care.