A corrections officer struck Never Again protestors with his truck outside of the Wyatt Detention Facility in Rhode Island, hospitalizing two while other protestors were pepper sprayed by police. Update: A Captain involved in the incident was placed on leave pending an independent investigation, officials say

A corrections officer struck Never Again protestors with his truck outside of the Wyatt Detention Facility in Rhode Island, hospitalizing two while other protestors were pepper sprayed by police. Update: A Captain involved in the incident was placed on leave pending an independent investigation, officials say 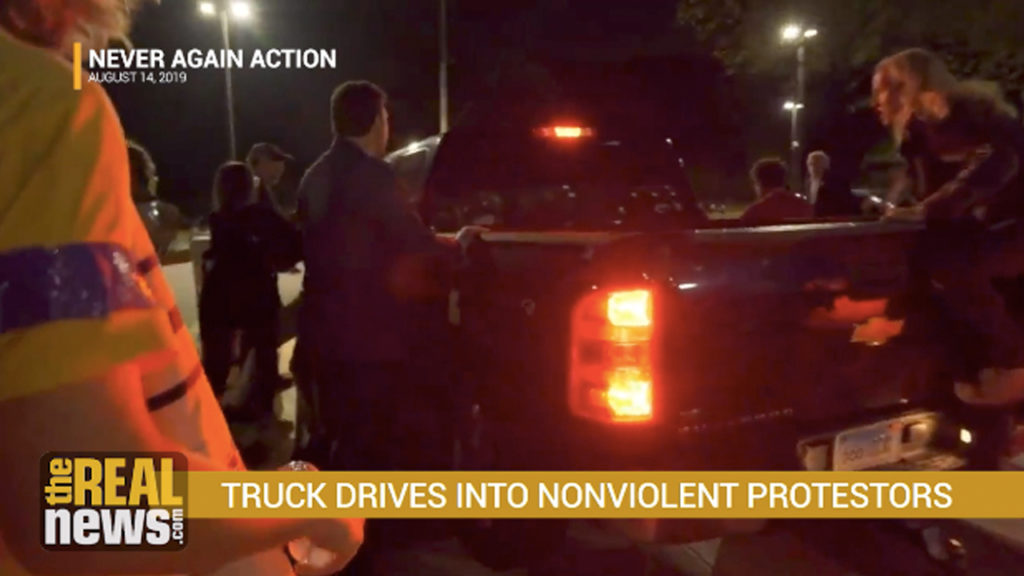 JAISAL NOOR: A truck drove into non-violent demonstrators, including minors, part of a protest targeting a Rhode Island prison for working with Immigration and Customs Enforcement on Wednesday.

JAISAL NOOR: Several were struck and two hospitalized by a truck driven by who they believe was an employee of the Wyatt Detention Facility in Central Falls, Rhode Island. This is Tal Frieden of Never Again Action.

TAL FRIEDEN: A black pickup truck SUV driven by a captain at the Wyatt Detention Facility deliberately drove into the line of protestors, threatening the lives of minors, elderly and disabled people who were holding the line.

JAISAL NOOR: It was a nightmare scenario for protestors who are seeking to pressure local officials to end their contracts with ICE. over what observers have called “inhumane immigration policies” carried out by the Trump administration.

TAL FRIEDEN: This reaction shows that we disrupted the deportation machine, that we were a threat to the deportation machine here in Rhode Island, and that in response to this violent attack, we will not back down and we will be back. We’re demanding that state leaders here in Rhode Island shut the Wyatt down and release all detainees who are currently held in the facility.

TAL FRIEDEN: A group of about a dozen correctional officers from the facility crossed the street, tried to surround the SUV, and then began spraying pepper spray at photographers, journalists, videographers, protestors— including elderly, disabled, and minor protestors— severely injuring three protestors who were later hospitalized, one of them with eye injuries.

JAISAL NOOR: Led by young American Jews, over the past weeks, thousands have taken part in protests across the country against law enforcement agencies and corporations working with ICE. On Sunday, 40 were arrested, protesting ICE ties with Amazon. Although there were no serious injuries, for some, the incident recalled the deadly white supremacist attack in Charlottesville in 2017, which just marked its second anniversary, resulting in the death of Heather Heyer and severe injuries to several others.

JAISAL NOOR: Wyatt Detention Facility didn’t respond for requests for comment. After hundreds protested the Howard County Detention Center on Sunday as part of a national day of action to close the camps, County Executive Calvin Ball told The Real News he was reevaluating his contract with ICE. The Sun reported the county has earned $14 million from ICE. since 2013. We’ll keep following this story. For The Real News, this is Jaisal Noor in Baltimore.