Jacqueline Luqman pays tribute to John Conyers, the longest-serving Black Democrat in Congress and co-founder of the Congressional Black Caucus, died over the weekend at age 90. His political career spanned more than 50 years, and included a remarkable legacy of civil rights activism, challenging the expanding US military global footprint, and consistent support for the poor and underprivileged.

Jacqueline Luqman pays tribute to John Conyers, the longest-serving Black Democrat in Congress and co-founder of the Congressional Black Caucus, died over the weekend at age 90. His political career spanned more than 50 years, and included a remarkable legacy of civil rights activism, challenging the expanding US military global footprint, and consistent support for the poor and underprivileged. 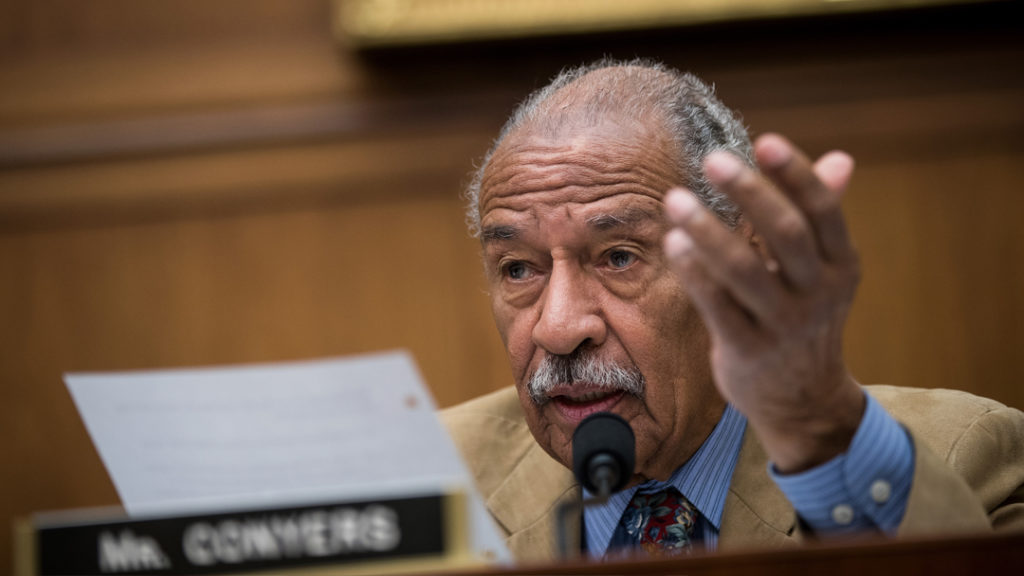 JACQUELINE LUQMAN: John Conyers, the longest serving black Democrat in Congress and co-founder of the Congressional Black Caucus, died over the weekend at age 90.

Conyers’ political career spanned more than 50 years and included a remarkable legacy of civil rights activism, challenging the expanding U.S. military global footprint, and consistently supporting the poor and underprivileged. The son of a renowned Detroit labor lawyer, Conyers began his political career in 1964, an ever present and accessible advocate for his constituents in Detroit. One of the most iconic images of Conyers is from the 1967 uprising in Detroit when he stood on the hood of a car with a bullhorn to try to calm the angry crowd in the aftermath of mass arrests and rumors of excessive force by the police against 80 patrons at an unlicensed bar.

Conyers was an early critic of the Vietnam war, one of only seven Democrats who voted against it, and continued a consistent anti-war stance throughout his decades in Congress. He voted against Reagan’s missile defense plans in the 80s, against the Persian Gulf War in the 90s, and against the Iraq War in 2002. He was also a vocal and strident critic of the expansion of the surveillance state and voted against the Patriot Act. His work to ensure and expand voting rights includes the extension of the National Voter Rights Act that was originally signed into law by Richard Nixon in 1970, and he worked to expose voting irregularities in Ohio after the 2004 election. Representative Conyers was involved in the impeachment proceedings against both Richard Nixon and Bill Clinton. He voted for impeaching Nixon, but opposed the impeachment of Clinton saying, “This is not Watergate. This is an extramarital affair.”

Conyers, in fact, was so fierce a critic of Richard Nixon that he was on Nixon’s infamous enemies list all the way up at number 13. The late representative was no stranger to fighting the long game for worthy goals. He began lobbying to declare Martin Luther King Junior’s birthday a national holiday just days after King’s assassination in 1968, and he lobbied for that holiday until the bill was finally passed in 1983. Several years after refusing to give up her seat on a public bus and sparking the Montgomery Bus Boycott, Rosa Parks helped a young John Conyers on his first campaign for Congress. After experiencing hardships in Montgomery, Rosa moved to Detroit in 1965, where Conyers immediately employed her in his district office as a secretary where she worked until her retirement in 1988.

Long before Black Lives Matter existed, Congressman Conyers held hearings on the misconduct and brutality of the New York City Police Department in 1983 that angered then mayor Ed Koch, and continued his probes in 1997, which angered another New York mayor, Rudy Giuliani. Conyers was Sanders before Sanders was Sanders. In 2003, Conyers introduced the expanded and improved Medicare For All Act. It only had 25 cosponsors at the time, but by 2017, after introducing the bill in every congressional section, his bill, HR 676, had 120 cosponsors; among them, Vermont Senator Bernie Sanders, who has since made Medicare For All the cornerstone of his second bid for the Democratic nomination for president. In every congressional session since 1989, Conyers has introduced HR 40, the Commission to Study and Develop Reparation Proposals for African Americans Act, more commonly referred to as the Reparations Bill.

HR 40 is now sponsored by Representative Sheila Jackson Lee, and it has been a rallying cry for black Americans and others in our country to the ongoing efforts to confront the legacy of enslavement, segregation, and discrimination in American history. There have also been notable blemishes on the long serving Congressman’s record. In 2003, he was investigated by the House Ethics Committee for allegations that he forced staffers to work on various campaigns, including his wife’s failed legislative campaign. In 2006, he admitted to violating ethics rules in having staffers chauffeur his sons to events. And he ultimately resigned in 2017 after allegations of sexual harassment of female staffers were lodged against him and made public.

Despite the ethics investigations and the allegations that ended his long legislative career, to which it should be noted Conyers vehemently denied, Representative John Conyers’ record of opposition to war, protecting citizens from an expanding surveillance state, defending the rights of marginalized people, and pursuing justice, equality, and a better quality of life for all is unparalleled and one that should not be forgotten.

What Is Behind Mayor Pete’s Corporate Pivot on Medicare?