Despite open opposition from the DCCC, Houston progressive candidate Laura Moser advanced to a runoff in one of the first contests of the 2018 primary season. Larry Cohen of Our Revolution discusses the struggle for progressive Democrats under a corporatist party leadership

Despite open opposition from the DCCC, Houston progressive candidate Laura Moser advanced to a runoff in one of the first contests of the 2018 primary season. Larry Cohen of Our Revolution discusses the struggle for progressive Democrats under a corporatist party leadership 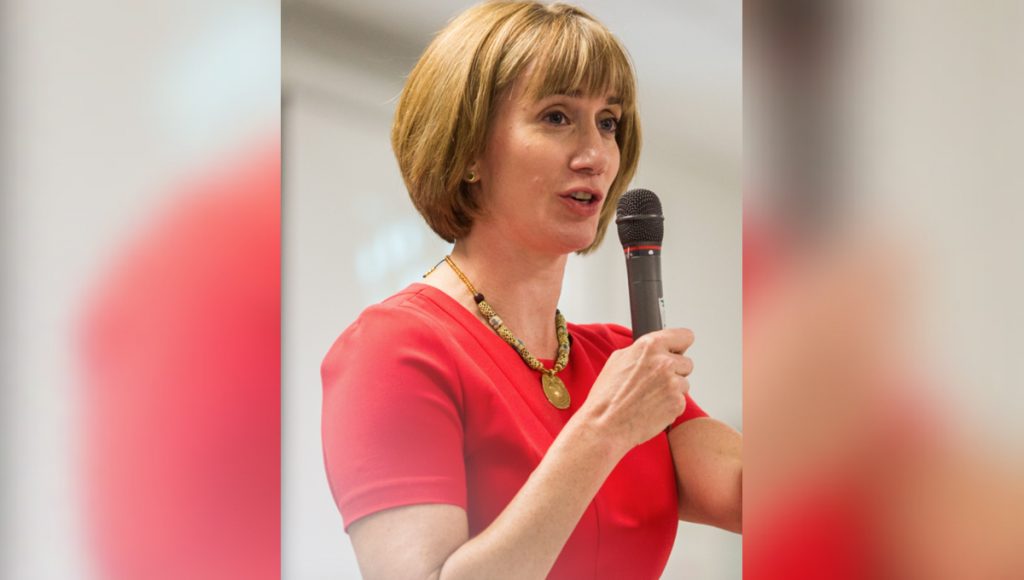 AARON MATÉ: It’s The Real News. I’m Aaron Maté. The 2018 primary season has officially kicked off with votes in Texas. The races there begin months of intra-party contests for Democratic and Republican nominations ahead of the November midterms, but on the Democratic side, the fight was already raging even before the first vote was cast. The Democratic leadership in Washington and its powerful allies have come under criticism for promoting corporate Democratic candidates over progressive ones, and in Texas, they have done so in unprecedented dramatic fashion.

Last month, the Democratic Congressional Campaign Committee came out publicly against Congressional hopeful Laura Moser, who is running in Houston. The DCCC even released oppo research accusing Moser of being a Washington insider out of touch with Texas voters. Moser’s husband was a high-level staffer on the Bernie Sanders campaign, and Moser is known as a progressive voice.

The DCCC’s attack on Moser sparked outrage from progressive groups, who accused the party of sabotage and interference. And on Tuesday, Houston voters sent a message of their own. Laura Moser won enough votes to advance to a runoff against the DCCC’s preferred candidate, Lizzie Fletcher. Their runoff will be held in May.

Well just before Tuesday’s vote, I spoke to Larry Cohen, the board chair of Our Revolution, which has endorsed Moser’s campaign.

AARON MATÉ: Welcome, Larry. Let’s talk about what happened in Houston. Were you surprised when the DCCC not just didn’t support a candidate, but actually came out against her?

LARRY COHEN: Disappointed for sure. I think the DCCC realized that they operate almost in an autonomous way, and this is not conducive to grassroots party-building. I think that’s dialogue number one. What is the DCCC? Who are they accountable to? Who are the staff there? Where do they come from? Where do they go? I think there’s going to be more scrutiny going forward of how that whole operation works.

AARON MATÉ: Why do you think they came out so forcefully against Laura Moser? They released this oppo research document, cherry-picking a quote of hers where she talked about not wanting to move back to the town in Texas where her grandparents lived, which of course is not even where she’s now running for Congress. She’s running in Houston. From their perch in Washington, accused her of being a Washington insider.

LARRY COHEN: Yeah. I think this kind of stuff has had its day. It doesn’t work. It’s the Democratic Party operating in the context of Citizens United itself while trying to criticize Citizens United. One of my other hats at the Unity Reform Commission, this is exactly what we spent the year talking about, that you can’t talk about democracy and voting rights, and then act like this. It’s not going to work inside the Democratic Party, to act like this and then to claim that, “We want to see voting rights. We want to see democracy across the country.” It’s not working. It backfires. It’s got to stop.

AARON MATÉ: The argument that supporters of the DCCC’s action will make is that they did so because they don’t think that someone as progressive as her is electable in that district. What do you think of that argument? If you disagree with it, what do you think was the actual reason for them attacking her?

LARRY COHEN: Number one, who are they to judge that? Literally, who are they? How do they make that decision? Who is it that makes that decision, compared to grassroots groups, whether it’s the huge Our Revolution group, or many others that are actually people that actually live in Houston? When we look at other people who have been elected in that part of Texas, they’re quite progressive over the years.

The main point here is, we’re either going to build a popular party that’s accountable to voters, and that lets voters decide, or we’re going to continue to deteriorate with these brilliant elitists, I don’t care where they live, consulting political class-type people, deciding that they know better than the voters do. That’s why we’re trying to build a political party called the Democratic Party rather than have people choose who the Democratic Party is. That’s not working.

AARON MATÉ: Let’s talk a bit about the other races where we’re seeing this dynamic play out, or at least allegations of this dynamic playing out. In Pennsylvania, you have progressive candidates like Jess King, also Greg Edwards, who accuse the DCCC of trying to undermine their campaigns. There’s another contest in Illinois. Just how pervasive is this, where the leadership in Washington is coming out against progressives and supporting corporate opponents?

LARRY COHEN: I wouldn’t say it’s pervasive, but on the other hand, it’s obnoxious. The irony in the Jess King case is that the candidate they were supporting, who had run the last time, who’s a moderate Democrat, she decided to move to Harrisburg, Pennsylvania, and run in a different district. Now Jess King is the only hope of winning, and they’ve already put their fingers on the scale. Jess King will win the primary there, but they can’t operate in this way. They don’t have the authority to do that. Do they even discuss this with Leader Pelosi? Who do they discuss it with? All they are, are staff, in essentially an autonomous organization that is focused on fundraising.

That’s exactly again, to go back to it, why you have a rebellion inside the party, why we created at the Philadelphia Convention the Unity Reform Commission, why we had a unanimous report there that we need to build popular parties in the 57 Democratic parties, the 50 states and D.C., Democrats Abroad, and both the territories. Either we’re going to build popular parties, or we’re going to continue to see gigantic losses like we saw during the Obama years. Eleven-hundred state legislative seats were lost. They need to learn that people are fed up. You’re not going to get people volunteering if they get to decide who are good candidates.

AARON MATÉ: Okay. In the few minutes we have, let’s talk about a few more things. The first is what you mentioned, the Unity Reform Commission, established in the aftermath of that bitter primary fight between Hillary Clinton and Bernie Sanders, in which you had surrogates of both sides, including you, joining this Unity Reform Commission to propose changes to the party, in the aim, purportedly, to make it more democratic. Now, your commission has come up with recommendations. The DNC is meeting this week, and the Rules and Bylaws Committee will be taking them up. What do you expect to happen there?

LARRY COHEN: The way the resolution was passed in Philadelphia, the Rules and Bylaws Committee, which is 32 members of the DNC, have up to six months to deal with our recommendations. They got them in the middle of December, so that means that I expect that the majority of them will get kicked to the summer meeting of the full 447. Rules and Bylaws has not released any of them yet. I expect that some of those proposals will get released when Rules and Bylaws meets this Thursday and Friday, and then go to the Saturday meeting. Which ones, I’m not really sure.

Let me just say in a positive way, given our other conversation, these 21 people, only eight, I was the vice chair coming from Bernie Sanders, we had seven others, but these 21 people who came mostly from the Clinton campaign, and three from the new chair, Tom Perez, learned to compromise and work together. I would say that we did come up with real reforms, and these reforms are the basis for unity, but we need the full 447 to see that the compromise has mostly been done. It started at the convention, when 4,600 delegates adopted a mandate for this commission. My own view is that great work’s been done. I credit the chair, because she had the majority, and we were able to work together and fashion what I would say is a real movement for change inside all 57 state parties as well as in the presidential nominating process, eliminating 60% of the superdelegates at the minimum, and much better rules for how primaries and caucuses are run, how the parties themselves should be run.

AARON MATÉ: Larry, let me say, there will be people watching this who will say that, “We don’t need unity in the Democratic Party. We need to take a page from your group, the name of your group, and have a revolution inside the Democratic Party, and oust the corporate Democrats.” On that front, let me ask you, we’re speaking on the day where the striking teachers in West Virginia have reached a tentative deal as part of to meet their demands for higher pay and to address healthcare, although healthcare is not explicitly part of the deal. Only a task force is being created. I’m wondering your thoughts on the Democratic role in that strike, where basically they were absent. There was no major Democratic Party support for the striking teachers. Did they miss an opportunity there?

LARRY COHEN: I’d say two things. One, the Democrats in the legislature, who are the minority, actually stood by the teachers. As you likely know, the House last week, a week ago almost, passed, by 99 to one, a 5% pay raise. The problem was the Republican leadership in the Senate. Bernie Sanders did offer to go there. The teachers’ unions preferred that he do social media supporting them. There may well have been other leading Democrats who were willing to go, but that doesn’t speak to your point of where was Joe Manchin, the Democratic senator. I don’t know the answer to that, to be fair [crosstalk 00:10:01].

AARON MATÉ: Manchin was the governor a decade ago when he oversaw the tax cuts that have put the squeeze on state coffers that led to this crisis, arguably.

LARRY COHEN: Yeah. I would agree with that analysis. I don’t know where he’s been in the last 10 days, but I would say that this is exactly, to your point, when Democrats need to step up. We couldn’t get the president or vice president to go to Madison, Wisconsin, seven years ago when Democrats nationally should have stood up for teachers, and students, and families in the big fight in Wisconsin. Yes, this is where Democrats need to step up and say, “We’re the party of working people, and that we will stand by working people, just as the community and the students have stood by the teachers of West Virginia.” Quite proud of the people of that state and what they’ve done together in the last two weeks.

AARON MATÉ: We’ll leave it there. Larry Cohen, board chair of Our Revolution, thank you.