The day after he held the biggest Iowa rally of the election cycle, Sanders held a climate summit in Des Moines. TRNN's Dharna Noor and Jaisal Noor spoke with attendees.

The day after he held the biggest Iowa rally of the election cycle, Sanders held a climate summit in Des Moines. TRNN's Dharna Noor and Jaisal Noor spoke with attendees. 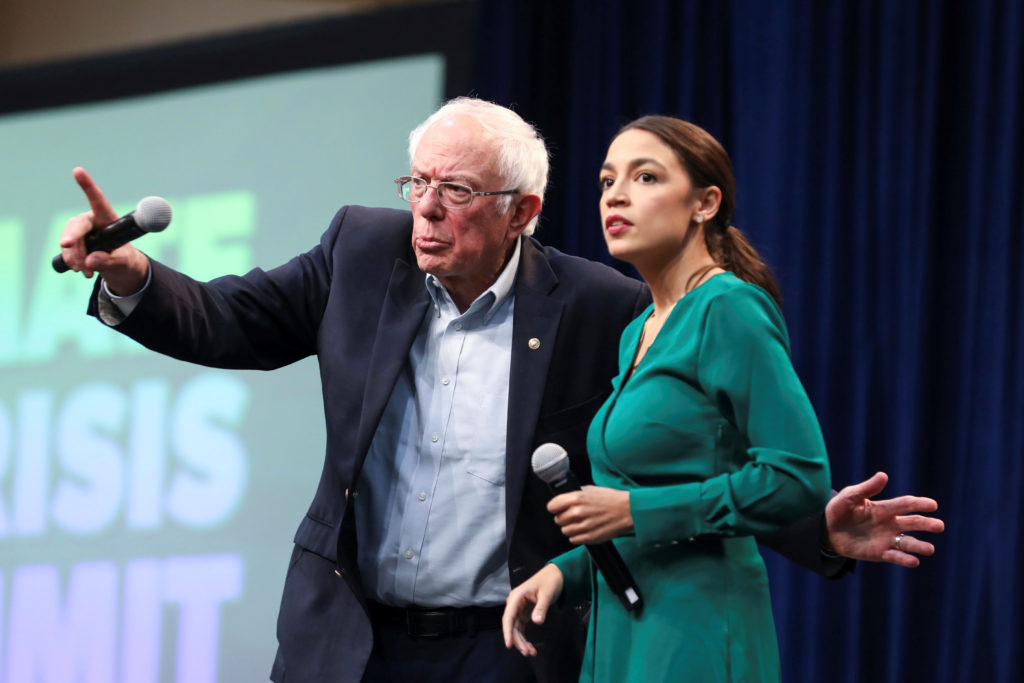 BERNIE SANDERS: And when I look at young people all over the world, this may be the moment when young people look their parents in the eye and say, “Now is the time to save the planet.”

And he’s been joined by Representative Alexandria Ocasio-Cortez, who’s behind me.

NAOMI KLEIN: I could sit here and tell you why Bernie’s Green New Deal Plan is better than all the other candidates–and it is by far–but that is not even the real reason why I support Bernie for President. I support Bernie because there’s no point in having a good Green New Deal plan if you’re not building the movement to win it.

DHARNA NOOR: Yesterday, Representative Alexandria Ocasio-Cortez joined Sanders in Council Bluffs, Iowa for the largest presidential rally in Iowa of the whole season. Some questioned his decision to skip another major presidential climate forum. Last night was the first ever Presidential Summit on Environmental Justice organized by the National Black Caucus of State Legislators. It featured six presidential candidates, including Elizabeth Warren; The Real News was a partner. And some wondered why Sanders wasn’t there.

Here in Des Moines, supporters touted Sanders’ $16 trillion Green New Deal. They say his climate plan is the only one that can take on this unprecedented crisis.

SIERA WEST: I’m here with Sunrise Kansas City Hub because we’re repping for the Green New Deal. We’re going to make this happen and we know Bernie is the man.

DHARNA NOOR: So why is Bernie the man? Why is he the one who you think is going to put forth the best for a New Deal? Who’s going to be coming with the best environmental policy?

SIERA WEST: He’s the only one who hasn’t waffled on this decision from first to last. He has been a supporter. He has been a co-sponsor. He has been with the situation to get this actually into a resolution. That’s something that we could actually move in the House and Senate.

DHARNA NOOR: We talked to some of the 1500 people who came out.

SPEAKER: I think that people are definitely sick and tired of people saying one thing and doing another and that’s why I feel like Bernie would be the best option. I think he was the best option in 2016 and I hope that he can do a great job in 2020 as well.

SPEAKER 2: I’m leaning more Pete and Warren right now. I feel like Bernie has just repeated the same thing over and over again and he hasn’t really come out with new ideas yet. Except for the Green New Deal, which I do applaud him for it.

SPEAKER 3: I’m still undecided, but I’m trying to learn more, so I’m doing my due diligence here. And the environment is obviously a very critical issue.

SPEAKER 4: I think that Bernie could vote to support the kind of the dichotomy between rural and urban areas in Iowa and how we sort of struggle with that as a state.

DHARNA NOOR: Do you think that climate change is an issue that’s really important to voters here?

SPEAKER: Yeah. As Iowans, we deal with water all the time. That’s a huge issue for us.

JACK RIERDEN: Here in Iowa we have 750 polluted waterways. And the president could institute immediately a moratorium on factory farms, meaning the stoppage of factory farms until there are less than a hundred polluted bodies of water in the state of Iowa.

SPEAKER 7: There’s water pollution, soil contamination with all the pesticides and stuff like that. It’s been getting a lot colder lately.

JACK RIERDEN: I think the major thing here in Iowa is flooding as it directly relates to climate, which unfortunately affects our agricultural system and the harvest here in Iowa and the planting of crops. There’s a street in Des Moines and a neighborhood that’s been closed down because it just has continually flooded and it’s uninhabitable.

SPEAKER: I would want to see things that support farmers as individual farmers rather than Monsanto and the larger corporations that are sort of controlling how they farm.

BRENDA BRINK: And we are an ag state, so we have to have the farmers supported. We have to have a parity pricing system put into place. He’s all on board with that.

We have to stop the proliferation of factory farms where you have thousands and thousands and thousands of animals being put in buildings. You’ve got nitrogen going up in the atmosphere coming down into our water from those pits that are underneath those animals in those confinements. He’s all on board as to putting a moratorium on any further building and expansion of those. There is no one with the track record and the authenticity that Bernie has, and that to me just says it all.

DHARNA NOOR: It’s less than months till the Iowa Caucuses, so all eyes are on the state as the presidential race is heating up. For The Real News with Jaisal Noor, Dharna Noor in Des Moines.