Thousands in London March Against Racism and the Far Right

Thousands took to the streets of London to protest xenophobia , and linked the rise of the far-right with austerity and the false promises of Brexit

Thousands took to the streets of London to protest xenophobia , and linked the rise of the far-right with austerity and the false promises of Brexit 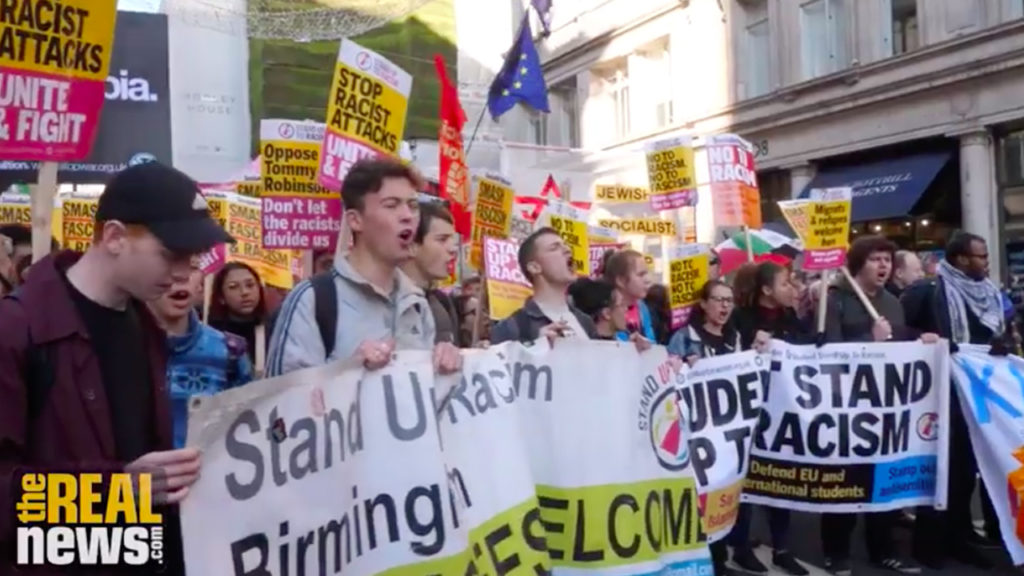 JAISAL NOOR: It’s Britain’s greatest political crisis in generations. Thousands have taken to the streets in London, England to oppose racism, fascism, and the rise of the far right.

PROTESTER: To show my solidarity towards the oppressed communities, to stand up and show the government and the people in power, and also the people that are now coming out of the woodwork with the far-right movement, with their racist narratives and racist rhetoric, to stand up against them and to show that there are people in London and the world, there are that oppose it.

PROTESTER: I’m here stay for the simple reason that racism and discrimination is the scourge of our country. And as a member of the Labour Party and as a supporter of Jeremy Corbyn, that is very, very important to me. And we need to be out there on the streets and fight racism. We need to organize and build a better society.

PROTESTER: We’re just here to demonstrate against racism, to show the football scene isn’t dominated by far-right. That’s just a small minority kind of of the working class as a whole, regardless of race.

PROTESTER: England and Europe and the world is moving more to the right. And I think people need to stand up and say this is not a good thing, that we need to respect all people.

JAISAL NOOR: The United Kingdom has been gripped with uncertainty surrounding Brexit, next year’s scheduled departure from the European Union. Prime Minister Theresa May’s future remains uncertain. She sparked calls for mutiny among her own party after presenting a widely-panned Brexit deal that prompted the resignation of two of her cabinet ministers.

PROTESTER: It is an absolute disaster. I think her policies are a disaster. Nobody can tell us exactly what is going to happen. Nobody knows. I don’t think they even know. So we should have a new referendum, and there should be a people’s vote.

JAISAL NOOR: Reports of hate crimes have risen dramatically since Britons voted to leave the European Union in 2016.

PROTESTER: Where I teach is at [inaudible] College, so we have a very mixed community there. And of course, particularly the young people there are becoming very aware of all the attacks going on, of particularly Islamophobia.

PROTESTER: Sadly, there’s a group of people here who have a small country mentality and see anyone who is different as a threat. And this is sort of incident to the Brexit mentality, as well. A lot of people see people who are different as something we have to be frightened of, which is complete nonsense.