Thousands Die, Millions Injured on the Job, and No Businesses Prosecuted 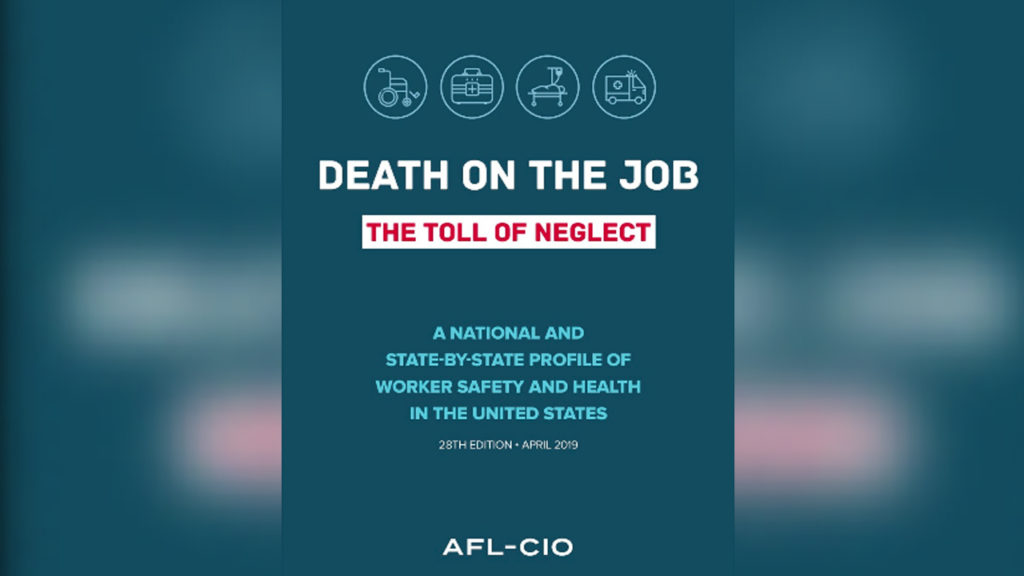 MARC STEINER Welcome to The Real News Network. I’m Marc Steiner. It’s great to have you all with us. The AFL-CIO just released its report Death on the Job: The Toll of Neglect, 2019. As an example, 5,147 workers were killed on the job in 2017. Another at least 95,000 workers died from occupational diseases. Think about that for just a minute. That’s an average of 14 workers-a-day dying on the job and it rises with 275 a day if you include those who died from illnesses caused by their job. At the same time, Trump is cutting the budget of OSHA, the Occupational Safety and Health Administration, while it has so few inspectors that it would take hundreds of years for them to really do their job and investigate cases— let alone, at other work sites where nothing has happened. Elizabeth Warren has raised this as an issue in her campaign. And this all remains, by the way, a misdemeanor for people who own businesses. And OSHA really brings owners to court for any of this, those who are accused. So where does this leave us? We talk once again with Bill Black, Associate Professor of Economics and Law at the University of Missouri-Kansas City. Bill is a white-collar criminologist, a former financial regulator, and author of the book The Best Way to Rob a Bank is to Own One, and a regular contributor here on The Real News. Bill, welcome back. Good to have you with us.

MARC STEINER Let me play this really short clip by Trumka, head of the AFL-CIO, announcing his report.

RICHARD TRUMKA Some of the most vulnerable working people are bearing the brunt of this travesty. Latino and immigrant workers continue to account for a disproportionate number of deaths on the job. And here is the scary reality: violence is the third leading cause of workplace deaths. One in six deaths on the job are due to violence.

PEG SEMINARIO And what we see is in hospitals, particularly psychiatric hospitals, the highest rates of workplace violence injuries ever. So the problem is getting much, much worse.

RICHARD TRUMKA Nearly 29,000 workers suffered injuries from assaults. And women in the healthcare and social services field are disproportionately the victims of these attacks. This is a national crisis.

MARC STEINER So I just wanted to play that to give some context, Bill, just in the sense of what’s out there. And we’ll play Elizabeth Warren speaking in a moment. But talk about it in a broader perspective or just the overall picture of what this means.

BILL BLACK Okay, so two broader perspectives. First, what we try to get across is that white-collar crimes kill and maim more people than do all blue-collar crimes put together. And therefore, when we’re talking about financial fraud, as we often do, there’s a danger that we will forget all these cases as well. The second thing in terms of context is this fits very much into Senator Warren’s proposal to make it easier to prosecute for these kinds of elite white-collar crimes.

MARC STEINER So having questioned, it really centers around— it seems to me, Bill, this is a huge issue. It’s not one that often comes up with the diminishment of labor unions as a political force. They’re still there, but they’re not what they were. This doesn’t get to the forefront as it might have before, especially in the early 70s when this first became a major issue again. So talk about what this means politically. Where do you think this takes us? Do you think it’s an issue that is an important one for this campaign in 2020? Where do you think this struggle is going to go?

BILL BLACK It should be and it’s important to all kinds of different constituencies in particular ways that may be attractive, particularly to progressive Democratic candidates. The first thing is it fits in because there was pushback to Senator Warren by folks who said, oh no, no, no. We shouldn’t put white-collar criminals in jail ever, virtually; instead we should simply use regulation. Well this is a great case study of that because we virtually never use prosecutions when employers— and remember, this is willful violations of the laws that kill people. And in many, many cases these are repeated willful, where they have already killed people at the same job site through the same mechanisms, and there’s still this complete unwillingness to prosecute. As you said, it is under federal law, not even a felony to willfully violate the safety laws and kill dozens of people over dozens of years. So that’s preposterous. In terms of the politics of all this, people don’t like this very much because it’s aimed at elite white-collar crime. Not at all of us generally in this context, but against poorer people, weaker people, and such. So a lot of this hits in Trump country, what’s killing people, what’s increasingly killing people. And remember, it isn’t just deaths. It is illnesses and injuries, and those are massively more common than the figures on death. One of the things is agriculture. So agriculture, as we all know, has an enormous reduction in number of workers, but the reduction in injuries and deaths is nowhere near as quick as it should be in that regard. Well, why? Because we have special laws to protect not farmworkers, but farm employers. So the farmworkers are disproportionately Latinos. And one of the things that’s causing enormous numbers of injuries, fast growing, and many deaths, is global climate change. So if you want the sharp point of the spear of where global climate change is already killing lots of people, it isn’t so much in these storms. It’s every day, quietly ignored. A farm worker dies from a heat stress, or is badly injured— many, many badly injured by heat stress. Elderly people— the Trump base, the rural Trump base. People my age are three times more likely to suffer work-related injuries. So all of this stuff about Social Security and how we need to not make people eligible for Social Security till they’re 70 or something, because hey, lawyers can still work easily when they’re 68. Yeah that’s great, but that’s not true in construction, industries, in farm work, and all these things. You can put older people in those places, but they will suffer injuries literally at three times the rate.

MARC STEINER So when you look at the states where this is most prevalent, they’re either right-to-work states or they’re states that have to do with extraction, like West Virginia and Texas. Those are right-to-work states, but it’s happening everywhere— they have some construction sites which are unionized up in New York City— as are injuries on construction sites in a much more massive way than their deaths. So…

BILL BLACK Sorry. That’s absolutely correct. And this problem of shredding the protections— OSHA, after all, was created by Richard Nixon, by some liberal types and it used to have broad support. Now, as you say, it’s down to its lowest point of inspectors ever. The old number, when they had 800 inspectors, they could visit each site they’re responsible for regulating once every 169 years. But now, we’ve lost a whole bunch more because the Trump folks refused to hire them and therefore, we’re quickly approaching every 200 years we get to see a place. This is preposterous.

MARC STEINER And given the numbers of people who are injured on jobs, or who die as a result of occupational diseases, it would seem to me you’d be hard-pressed to find a working-class family in this country— Black, white, Latino, Asian, whoever they are— that has not been affected by this at some level. The numbers are huge.

BILL BLACK Yeah. Well I grew up in Dearborn, Michigan. At least three of my close relatives have died from this. And if you want to bring that to politics, these are battleground states. It’s the rust belt that has also huge numbers of these kinds of losses. But in places like again, Trump’s base, think Iowa and such. Well farmers are not poor anymore as a group. They have mega farms. They have $5 million in equipment and such. Farmworkers are poor, and we have special laws that say, OSHA not only can’t regulate small farms, it can’t even investigate after they’ve killed people. And what’s the result of that? Again, disproportionately where the deaths occurring, on these small farms that put in none of the modern protective devices. So they’re completely unnecessary deaths. These are not things where you need to spend $10,000 to make them safer. Many of these things are simply putting guardrails and such. They cost a hundred bucks literally in many cases, the protective measures. And in many cases, the places, the farms, the particular farms where the workers are dying, they die three of them over the course of eight years. That’s just outrageous, but there is nobody pushing this politically at the national level as a Democratic candidate. And we’ll see, given the AFL-CIO release, who will pick it up and run with it. Elizabeth Warren is obviously well-positioned, given her release on white-collar crime.

MARC STEINER Well this has to be the first, brief look at this we’ve done here with you, Bill Black, today. And we look forward to doing this more. This is one of your bailiwicks and I really want to get deep into it with you in the coming weeks. Bill Black, once again, it’s great to have you with us. And this is a really critical subject. I’m glad you raised it to us.

MARC STEINER And I’m Marc Steiner here for The Real News Network. Thank you all for joining us. Take care.

September 5, 2019
Sign Up for Our Newsletter
Help Us Make Real News!