How Progressive is Elizabeth Warren?

America's second favorite Senator has been campaigning for Hillary Clinton for weeks now after having said almost nothing about Bernie Sanders, which has some voters asking where her allegiance really lies

America's second favorite Senator has been campaigning for Hillary Clinton for weeks now after having said almost nothing about Bernie Sanders, which has some voters asking where her allegiance really lies 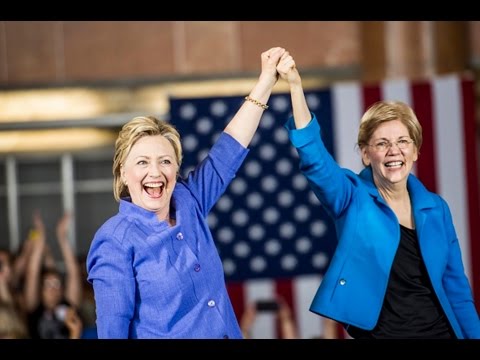 THOMAS HEDGES, TRNN: Bernie Sanders endorsed Hillary Clinton just two weeks ago. But America’s second favorite progressive Senator, Elizabeth Warren, has already been campaigning for Clinton for weeks now and with a level of enthusiasm that’s prompted many of her supporters to ask, who really is she?

HEDGES: Warren said almost nothing during the Democratic primaries, but now she’s drawing criticism both from Hillary Clinton supporters for having been the last woman in the Senate to endorse Clinton, as well as from Bernie Sanders supporters, who’re frustrated that one of their favorite progressives never joined the Bernie Bandwagon.

HEDGES: Bill Curry, a former aide to Bill Clinton and now a columnist for Salon.com, says progressives have grown intoxicated by a Senator who he feels has been deeply misunderstood.

BILL CURRY: Did you know that she was for most of her life a Republican? As best I can tell, she didn’t become a Democrat until the 2000s.

HEDGES: When Elizabeth Warren was elected to the Senate in 2012 after beating Republican Scott Brown she’d already been in the national spotlight for going after the banks that caused the 2008 crash, first overseeing the government’s TARP program and then pushing for the creation of the Consumer Financial Protection Bureau in 2010. As Senator, she earned a saintly reputation almost overnight.

HEDGES: She kept that energy going in the Senate, adding the fight for minimum wage to her docket of issues. But Curry says her popularity, which grew from favorable to now almost legendary, has managed to obscure both her as a person and her politics.

CURRY: But on the larger question of whether small businesses can get capital, whether the banks get to take almost 2 percent overtime people swipe their credit card–on that actual question of the allocation of money, wealth and power, it’s a little less clear. She’s for making them honest and not letting them be irresponsible. But the more systemic the issue, the less clear it is.

HEDGES: It’s not that there aren’t hints of her establishment leanings. She’s known for tempering her firebrand politics with a fierce loyalty to the Democratic Party for example. She also toes the party line on Israel.

CURRY: In her campaign memoir, she cited Madeline Albright as her principal foreign policy adviser. Albright is obviously the most iconic figure of the most hawkish wing of the Democratic Party. I sure would like to know more about that.

HEDGES: In 2014, she agreed to serve as an emissary to progressives after Senate Minority Leader Harry Reid asked her to do so, which Curry points out would have been the perfect time to begin trying to transform the Democratic Party as Sanders has tried to do.

CURRY: With all the need for movement building, I don’t think she saw that opportunity and if she saw it, she didn’t take it.

HEDGES: But it’s true also that these points are slightly minor. Curry says it may be more accurate to say that Elizabeth Warren’s popularity amongst progressives, even as she continues to prop up the establishment, may have more to do with voters longing for a politician in Washington with some kind of expertise and integrity on at least a couple issues.

CURRY: Again, I would say that I’m grateful for her expertise in those issues. There are fewer and fewer politicians with any expertise whatsoever. Their only expertise, increasingly, in the United States Congress is fundraising. They spend more time fundraising than they do talking to their own children let alone reading up on policy. It’s just what that life has become and so to find someone who brings that much intellectual capital even in a few areas is a big deal.

HEDGES: In the end, Curry says that Warren’s most significant shortcoming isn’t what she says but what she doesn’t say, from single payer, to mass incarceration, and to climate change, that without a structural approach to the problems we face in America, she is only capable of pushing for minor reforms.

CURRY: The fix that is needed here is much more systemic. It’s not enough just to add a little on to Obamacare. We do need to move to single-payer, certainly a real public option. We need a whole new energy system–you can go right across the board. Our entire national security system: we’re buying the wrong kind of defense and spending far, far more than we should on it. Every one of these areas needs not just a little bit of fixing but, as I said, a gut rehab. Who are the politicians who see that? Is Warren one of them? I don’t know yet.