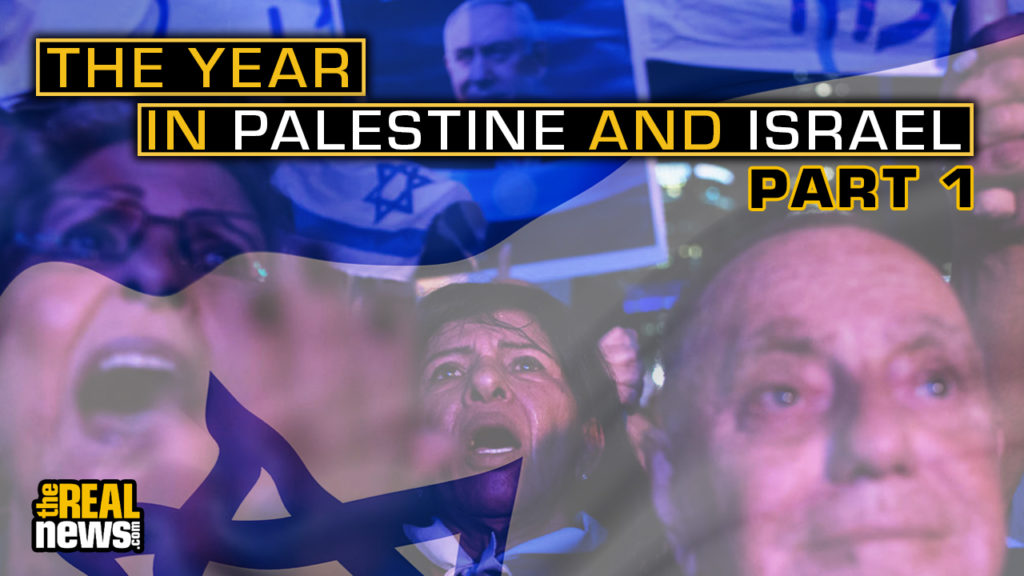 MARC STEINER: Welcome to The Real News. I’m Marc Steiner. Good to have you all with us.

And this is another one of our continuing stories of the end of the year wrap-up to see what’s been happening in the past where it may take us in the future. It’s also a good time to wish you all a happy holidays.

We are once again with Shir Hever, who is our correspondent who lives in Heidelberg, Germany, joining us for the second part of our conversation where we’re looking at Israel and Palestine and focusing now on the corruption charges against Netanyahu and what that might mean and the annexation of Jordan Valley. If that happens in the next year, what could that explode and how is it connected to the world populace?

Shir, as usual, good to have you back.

MARC STEINER: Let’s start with your favorite person, Benjamin Netanyahu, and talk about these corruption charges that have been part of the news for a while. But then now they’re really tied up because of the battle over who’s going to be the next prime minister and who’s going to head the Likud Party. So give us a little bit of the background. But looking through a crystal ball, what do you think is going to happen?

SHIR HEVER: Well, I think Transparency International, they found that 40% of all populous leaders around the world have charges of corruption pressed against them. In some ways you need to have a corruption case in order to be a populous leader because that’s how you can get into a fight with the judicial system, with the police and the media and claim that they’re all conspiring against you. And without that, you’re not a real populist.

So Netanyahu obviously needed those corruption cases against him, and he used them and squeezed them for the last drop. But at some point, the judicial system has put it’s foot down and now it looks like the charges are going to be pressed and the evidence is overwhelming. I think specifically the jail time that he could be facing is up to 10 years in jail. But in every likelihood, it’s going to be less than that. But even one day in jail means that he’ll have just not be the prime minister anymore.

And so that’s probably what we’re facing. And they’re delaying the charges again and again, and now they’re probably going to delay them until after the elections of March. But once the election doesn’t give Netanyahu a clear majority, then he will have to ask the Knesset for immunity. The Knesset might not give it to him because he might not have enough of a majority. In that case is his political career is pretty much over.

MARC STEINER: Make this connection for us. I mean there’s a huge difference between the Israel right wing moves and what’s happening in the countries we talked about in the last second for a moment, in Brazil and Eastern Europe, in Hungary and in Modi and India, there’s a difference. I mean Israel also has an occupying force. There’s other things going on there as well. What’s the connection for you with Netanyahu in this world? One of the things you said in the past is that Netanyahu is almost like a pioneer in terms of moving this worldwide populous movement right wing movement ahead. Talk a bit about that.

For world leaders from the far right part of the political spectrum, that’s wonderful because then they can make deals with Netanyahu and say, “We’re going to say that we’re pro Israel. We’re going to oppose the BDS movement. We’re going to support you in the UN or in the European union, and so on. And in exchange you’re going to do a little photo opportunity with us, come and visit us and legitimize us even though we are representing parties that have deep roots in antisemitism and racism and so on. But then we’re going to say we’re not really antisemites because we support the state of Israel.”

That’s what we hear constantly from Trump, from [inaudible 00:04:10], from Orban, from Modi, that their support of the state of Israel is cover for the racism that they want to have in their own countries. The difference of course, is that in Israel this racism is legally entrenched on a much, much deeper level than in any other country in the world because you have an official apartheid system with people of different levels of representation that don’t even have the right to vote and that don’t have the right of freedom of movement.

That’s the reason that Netanyahu’s populism in the end can only galvanize at a very certain part of the population. Only the people who are in his ethnic national religious group can actually support him. And because of that, I think there’s also a limit to how much power he can gain through populism while in countries like Hungary, if Viktor Orban is able to galvanize the majority of white Christian Hungarians, well, they are already pretty much the overwhelming majority of the country. And then we’re looking at the beginning of old fascism, which in Israel we don’t see.

That also explains in some ways what we saw here in the United States a few weeks ago when Trump was talking to the American Israeli committee which is made up of mostly Israelis who now live in the United States, where when despite his antisemitic tirade, he was cheered and they were chanting 12 more years for Trump. I mean those connections are really becoming exposed. I think what you’re describing describes why that happened here in this country when he was talking to that group, when Trump was talking to that group.

SHIR HEVER: They do not. The thing is that a lot of Israeli journalists and a lot of American journalists like Peter Beinart are saying Netanyahu’s policy’s ruining the ties between the state of Israel in Jewish communities around the world, especially in the United States. He has humiliated them, abused them, and they no longer support the state of Israel because of what Netanyahu did. Netanyahu’s response to this is who cares? I don’t care about Jewish communities around the world. I care about governments like [inaudible 00:06:28] scenario or Donald Trump that can support me, and even if it means alienating all the world’s Jews.

MARC STEINER: One last final question here. The annex, both major parties in Israel, the blue and white pentagons and that the [foreign language 00:06:42] all support the annexation of the Jordan Valley. If that actually happens, if Israel actually officially annexes the Jordan Valley, the most kind of fertile region in the entire of Israel Palestine, this could cause a huge reaction internationally as well as internally in Israel. So again, go to your crystal ball. What would happen? What do you think is going to happen when this happens, because I think it is going to happen?

SHIR HEVER: The international criminal court of justice in the Hague actually held a discussion specifically about this question. They said that this would actually warrant the pressing charges against senior Israeli officials in the military and also in civilian institutions for the war crime of illegally annexing occupied territory. That’s the consequence. And as a result of that, the state attorney office of Israel has issued a warning to Netanyahu, don’t fulfill your campaign promise and don’t annex that territory because we as lawyers working for the government may not be able to travel to Europe anymore. We could be arrested.

I think that’s where we talk about the consequences. But we have to say that on the ground that Jordan Valley has already been annexed. That’s the reality. It used to be a place where a quarter of a million Palestinians lived until 1967 producing food for the whole region. And today there are about 50,000 Palestinians living there, 53 years later, after a very slow but methodical ethnic cleansing.

There are only about 9,000 Israeli colonists in that area, but they have taken over virtually all the water, the best fertile land, access to the Jordan river, and they get government subsidies and they produce agricultural products that are then labeled falsely as if they were made in Israel and exported into other countries around the world. This is also actually something that is causing a lot of controversy and the European union decided that they are not going to allow that anymore. But how are they going to enforce it when the companies are lying, the Israeli government is lying?

The Jordan Valley is already under very heavy boot of the Israeli military and officially annexing it, isn’t going to change very much except to signal the fact that all of this talk about two states solution is something that the Israeli government is not even paying lip service to anymore and that is an important step.

MARC STEINER: Another day we’ll talk about that. I think the two state may be dead on arrival at this moment. But we’ll explore that in another day. I think they’re looking again in a deeper way at the Jordan Valley would be a story that needs to be told because it’s emblematic of the entire occupation. It’s at the heart of it.

So Shir, thank you so much for joining us here and giving us a review of what’s been happening over the last year, what may be happening in the future.

MARC STEINER: Have a happy New Year and we’ll talk to you soon.

MARC STEINER: We’ll talk to you soon. And a happy New Year to everyone out there. I hope you’re enjoying your holiday season. And I’m Marc  Steiner here for The Real News network. Take care. Have a great year.