The War on Terror’s Toll, From Atrocities Abroad to Mass Shootings at Home

A new Brown University study says the US-led so-called "War on Terror" has killed around 500,000 people in Afghanistan, Iraq and Pakistan -- an "undercount," it stresses. And as Ian David Long -- an-ex U.S. Marine who served in the Afghan war -- kills 12 people in Thousand Oaks, California, might we also count victims of mass shootings carried out by U.S. veterans? We speak to Vijay Prashad of the Tricontinental Institute for Social Research.

A new Brown University study says the US-led so-called "War on Terror" has killed around 500,000 people in Afghanistan, Iraq and Pakistan -- an "undercount," it stresses. And as Ian David Long -- an-ex U.S. Marine who served in the Afghan war -- kills 12 people in Thousand Oaks, California, might we also count victims of mass shootings carried out by U.S. veterans? We speak to Vijay Prashad of the Tricontinental Institute for Social Research. 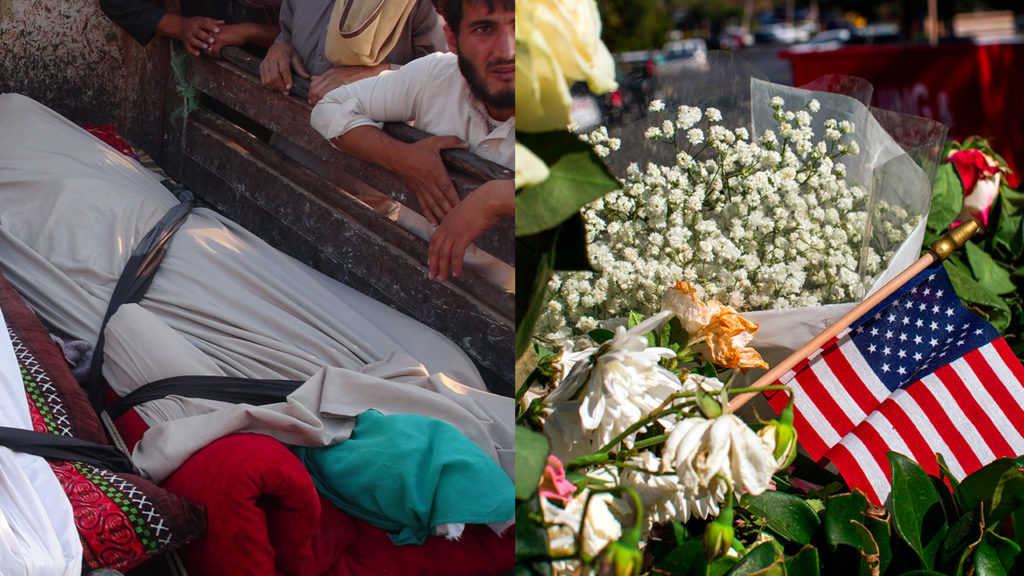 A new study says the U.S.-led so-called “war on terror” has killed up to 507,000 people in Iraq, Afghanistan, and Pakistan. The report from Brown University’s Watson Institute for International and Public Affairs calls that half a million figure an undercount due to the, quote, “great uncertainty in any count of killing in war.” It’s the latest effort to assess the carnage from 17 years of endless and expanding U.S.-led war around the globe.

And to that toll we also might add U.S. citizens dying at home. The shooter in this week’s [Thousand] Oaks massacre was Ian David Long, a veteran of the Afghan war. Ventura County Sheriff Jeff Dean said that police had previously interacted with Long, and that he may have suffered from PTSD.

JEFF DEAN: In April of this year deputies were called to his house for a subject disturbing. They went to the house. They talked to him. He was, he was somewhat irate and acting a little irrationally. They called out our crisis intervention team, our mental health specialist, who met with him, talked to him, and cleared him. Didn’t feel that he was qualified to be taken under 5150, and he was left at that scene last April. He is a veteran. He was in the United States Marine Corps.

I understand that was part of the discussion when the deputies went out to the call with the crisis team, that felt he might be suffering from PTSD, basing that on the fact he was a veteran and had been in the Corps.

AARON MATE: According to a tally from the peace activist David Swanson, 35 percent of U.S. mass shooters since 1982 are military veterans.

Here to discuss the death toll of the war on terror is Vijay Prashad, historian, author, and executive director of the Tricontinental Institute for Social Research. Welcome, Vijay. Just to make clear off the bat, when I introduce this element here of the [Thousand] Oaks shooter, for example, I’m being speculative, because we don’t even know for sure that he did suffer from PTSD. There are reports that he did. And of course even if he did, we don’t know if that played a factor in the shooting. But I think it’s important to explore that link. And it’s also important just to talk about the victims of this global war, this endless global war on terror. And now we have a new study from Brown University saying it’s around 500,000 at least, although they call that a vast undercount. Your thoughts, Vijay, on these figures?

VIJAY PRASHAD: Well, the Brown study is an important study, and less than the exact number is the increase in people who have been killed. Brown released a study a few years ago, and there’s been a marked increase in the numbers based on their own study.

The reason why I say the numbers need to be always hesitated before, there are two reasons. One is we don’t really know- and as you said, they said it’s an undercount. We don’t know what these numbers are like. You might remember in 2006, Lancet released a report and said that in Iraq alone in 2006- that is, three years after the U.S. war in Iraq, the death toll was 650,000. You know, that was a really rattling number.

I think the exact figure is not easy to come by, but I think we should concentrate on something slightly different than that, and that is that there’s been an increase in the number of people killed by aerial bombardment. You know, two different places track this. One is Air Wars, and the other is Action on Armed Violence. These are two sort of charity groups- or campaign groups, rather, not charity groups- campaign groups, or research groups, that track aerial bombardment. And by both the counts of Air Wars and Action on Armed Violence, it’s clear that in the last few years the death toll by aerial bombardment has increased dramatically. They say 15,000 just last year in these theatres alone.

You know, why this is important is it tells you a little bit about the shift in the rules of engagement utilized by the United States and its allies. They are not sending troops on the ground in as large numbers as they did in the early part of the war on terror. They are mainly bombing from the sky. And when you bomb them the sky the likelihood of killing civilians is much increased. I think this should be something that concerns people a great deal.

AARON MATE: And so bringing this to the mass shootings here in the U.S., I think it’s important to think about not just whether or not wars are having an impact on veterans to the point where they carry out atrocities like these at home, but also think about what this means for the initial victims, the the civilians of the population that these soldiers who commit mass killings at home were first occupying, and what sort of mentality they are bringing into the war zones before they come back to the U.S. and carry out mass shootings, and whether- what impact that has on civilians. I mean, there’s famous incidents like the killing by Blackwater guards opening fire on civilians in in Baghdad. But I’m wondering, Vijay, based on your studies of the war on terror, your sense of what sort of mentality is fueling, or sort of plays into the soldiers occupying foreign countries like Afghanistan or Iraq.

VIJAY PRASHAD: Well, I can say that having interacted with U.S. soldiers on duty in Afghanistan and Iraq, there is a great sense of bewilderment about what they’re doing there. I mean, this has to be put, I think, directly at the front of the discussion, which is that the mission itself is bizarre. You know, you’re fighting against terrorism. They don’t understand really who the enemy is. There’s no clear front line. They sort of taught to believe that everybody there is a problem, except perhaps children, to whom you can distribute sweets, and so on.

And this puts them in a position of great fear. I mean, any soldier, American soldier, who goes on a night raid, for instance, in a small community in Afghanistan quite rightly feels that everybody is against them. I mean, after all, you’re going and breaking down the doors in somebody’s house in the middle of the night; helicopters landing in a small village. You’re jumping out of there. It’s terrifying for ordinary people. And so you feel hated by people. You also feel that everybody, therefore, is the enemy. And then you let off your gun against civilians. And it clearly- it creates terrible psychological problems for people.

There is no clear mission in this war on terror. Let’s be frank about it. You know, there is no understanding what it means to say that this war has, you know, no spatial or temporal barriers, which is what George W. Bush said. You know, we’ll come anywhere we’ll come any time, et cetera. There are no barriers, so you don’t understand who the enemy is. Naturally you’re going to feel as if everybody, therefore, becomes your enemy.

And I think this is magnified when a country like the United States with its immense firepower decides to use extraordinary violence from the air, where you are essentially wiping out entire towns. You know, reports have now come out of the very gross civilian casualties in Mosul in Iraq, and in Raqqa in Syria, where the U.S. essentially carpet bombed these areas, under the guise of a term like ‘precision bombing.’ There is no such thing as real precision bombing. You end up carpet bombing civilian neighborhoods. And this creates all kinds of problems for the fighters. If you have a war with no mission, you should stop that war.

AARON MATE: Finally, Vijay, on this topic of disregard for civilian life, let me ask you about the attitudes of top U.S. officials right now. There was just an interview this week from Secretary of State Mike Pompeo as he unveiled this latest round of crippling U.S. sanctions on Iran, and he was asked about the impact of the sanctions on the Iranian people. And he said this. Talking about the Iranian government, he says, “Well, remember, just so you remember, the leadership of Iran has to make a decision that they want their people to eat.” Essentially threatening the Iranian people with starvation if their government does not play along with U.S. demands.

VIJAY PRASHAD: You know, I would like people in the United States, in Europe, in Canada, in Japan, in countries of the West and Western allies, I would like people to consider the following. You know, when a person dies in the United States, it creates a sense of outrage and grief. That same outrage and grief is manifest in Iraq, in Afghanistan, in Syria, in other countries. It’s not like there’s a different attitude towards human life. But it’s an extraordinarily callous attitude towards people in Iran, in Yemen, in countries where aerial bombardment consistently kills thousands of people. It’s a callous attitude. And maybe it’s the numbers. Maybe when a thousand people die in a week you don’t feel bad about it, but if one person is shocked you are horrified. I think we really need to have a new calculus, a moral calculus, when we come to look at countries like Afghanistan. You know, the death of an Afghan is as important as the death of an American. And that’s something people need to remember.

AARON MATE: And perhaps the fact that you have veterans of the wars that are killing Afghans now also killing Americans, perhaps that will help wake people up to the realities of what is going on both abroad and at home.

We’ll leave it there. Vijay Prashad, historian, author, executive director of the Tricontinental Institute for Social Research. Thanks very much.