The US Should Stop Lying About Its History

Not only should statues celebrating Columbus be removed, but textbooks should reflect his murderous legacy, argues Maryland Delegate Gabriel Acevero.

Not only should statues celebrating Columbus be removed, but textbooks should reflect his murderous legacy, argues Maryland Delegate Gabriel Acevero. 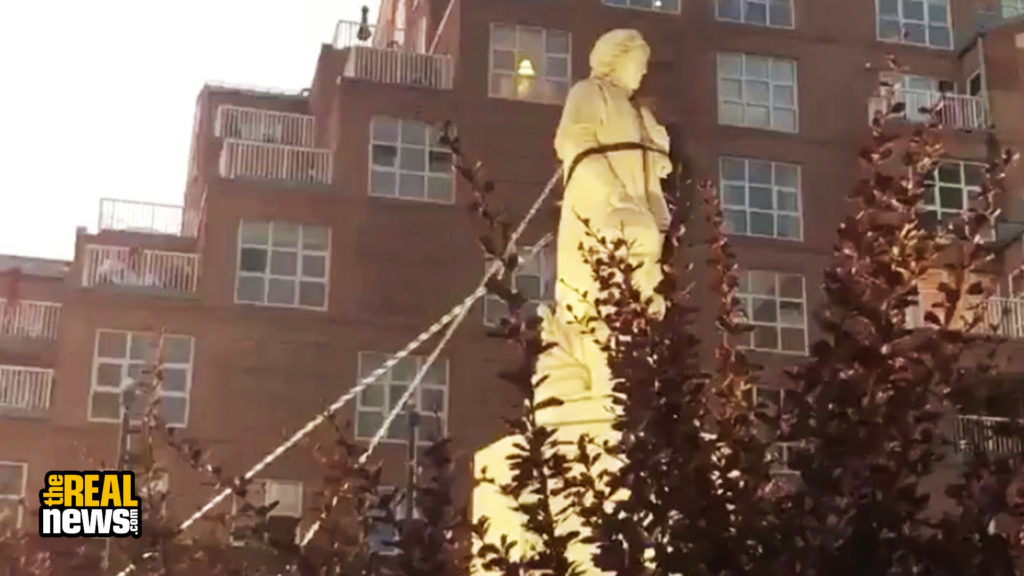 Speaker 1: I wanted to get your response to events on July 4th, Saturday night, when in Baltimore, Maryland, protestors toppled a statue of Christopher Columbus and threw it into the harbor. You’re someone who is of Afro-Latino descent. Christopher Columbus never even set foot in the United States, which didn’t exist, but the monument was actually put up by Ronald Reagan in the ’80s. What does that mean to you? Everyone from President Trump, to Governor Hogan, has condemned this act as an act of lawlessness, and there’s been promises to prosecute the people that have been tearing down these racist statues.

Delegate Gabrie…: Well, it’s amazing how quickly we can not only respond, but call for the prosecution of people who are rightly tearing down and removing lies, because that’s what it is when we erect statues and edifices to people who have brutalized, who have murdered, who have stolen, we are lying, as a country, not just to ourselves, but to the world. And so, I think what we saw on July 4th in Baltimore City, was truth-seekers and truth-tellers, in essence, saying, “We are no longer going to condone this lie,” and this is a lie that is not only represented in statues, but it’s also represented in school curriculums. This is why we need to have a conversation about how school curriculums perpetuate white supremacy, and we continue to teach our children an inaccurate account of history, and we continue to glorify and deify people who should not be placed on a pedestal, but who should be understood as murderers, as thieves, as liars.

And I think anytime a society is uncomfortable with the truth, we will hate the people that speak it. And so, when you see organizers and activists in Baltimore City, not only tearing down statues, but throwing them into the harbor or wherever, the anger that people have about that, some people like Governor Hogan and the person that occupies the Oval Office, what we are seeing is an unwillingness to confront truth. And that’s what that is, right? I am against perpetuating white colonial, white settler colonial history, and the more we erect statues to Lee, and to Columbus, and to all these Confederate soldiers and known racists, we are not just lying to ourselves as a country, we are lying to the world, and it is time that we stop lying. It is time that we face that uncomfortable truth.

But the reality of it is, is that America is not willing to face that uncomfortable truth. We keep calling for unity. We keep calling for a United States of America. You can’t have unity without peace. You can’t have peace without justice. You cannot have justice without truth-telling, and you can’t have truth-telling without courage. And America does not have the courage to have that uncomfortable conversation, not just about race, but the role of race in every single segment of our society. And that is what we have to force, in terms of a conversation on the rest of America, because we have to confront this, we can’t continue to ignore it.

And so, what you’re seeing when people pull down Confederate flags and pull down Confederate statues, and statues of Christopher Columbus, it is truth-seekers and truth-tellers who are basically saying, “We’re done with the lies.” But we cannot just pull down these statues, we have to ensure that this lie is not told in school curriculums, because to date, that is how our children are taught about Christopher Columbus. That somehow, he was this amazing voyager that discovered all these places, when in actuality, indigenous people were already there, and what he brought was terror, theft, murder, and the loss of land by indigenous people. And that is not something that we should celebrate.

And so, I’m really disappointed in the Governor, who has such a strong choice of words for the activists and organizers who did the right thing, but don’t have that same strong words for law enforcement, who routinely kill black and brown people, not just in Maryland, but across this country. He was Governor when the Freddie Gray unrest took place. What has he done since the Freddie Gray unrest happened? Anton Black was killed. When he was killed, Governor Hogan said publicly that his family deserved answers and accountability.

To this day, the family has not gotten any answers, any accountability, or any kind of justice. So who are we lying to? Right? And this is what this entire conversation is about, is dismantling the lies, and building a country that is not only based on truth, but honoring the contributions of the people who have come before us, the people who have contributed so much, sacrificed so much, yet lost so much to the building of this country.

Delegate Gabrie…: Thanks for having me.

Speaker 1: And thank you for joining us at The Real News Network.