It is generally assumed that Carnival in Brazil is mostly just a big party. However, as Mike Fox reports from Brazil, it actually has its origins in politically motivated concerns and this is true now more than ever

It is generally assumed that Carnival in Brazil is mostly just a big party. However, as Mike Fox reports from Brazil, it actually has its origins in politically motivated concerns and this is true now more than ever 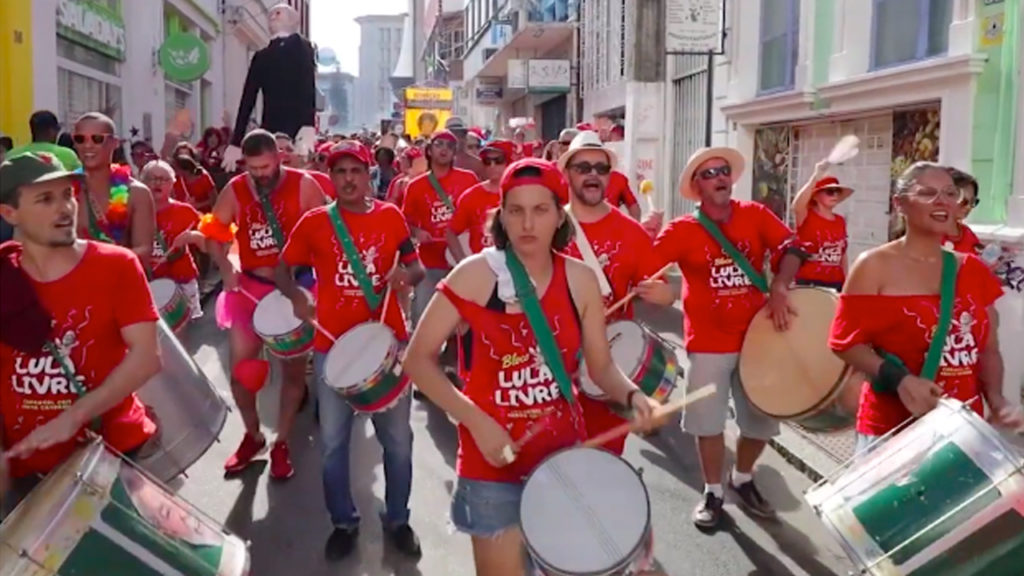 MIKE FOX: Brazilians are in the streets for Carnival. Millions across the country. And for many of them, it’s an act of resistance.

Supporters of former president Luiz Inacio Lula da Silva have formed Free Lula Samba groups around the country, like this one in Florianopolis.

They have been practicing for several weeks. They took to city streets over the weekend.

VITOR SILVEIRA, FREE LULA SAMBA GROUP, SANTA CATARINA: We are here today with everyone who wants to combat fascism in Brazil. This is a political act to combat Lula’s unjust imprisonment, and transforming Carnival into big grassroots action against this.

MIKE FOX: Former president Luiz Inacio Lula da Silva has been in prison since last April. He was convicted of accepting a beachside apartment from a company seeking government contracts. But the ruling was based on plea bargain testimony. No evidence was found. His jailer, judge Sergio Moro, is now president Bolsonaro’s justice minister. Lula supporters say his imprisonment was just a move to block him from running in last year’s elections.

DANIELLE DE PAULA, WORKERS PARTY YOUTH ACTIVIST: Today the greatest grassroots leader that we’ve ever had is unjustly imprisoned, accused of crimes that he didn’t commit, and for which there is no proof. And we need to agitate so we can get him out of prison. So he can be free.

MIKE FOX: They hit the streets and marched to the Carnival celebrations in downtown Florianopolis.

It was also a protest against the government of far-right president Jair Bolsonaro, who was inaugurated on January 1st.

Chants against Bolsonaro have erupted at Carnival celebrations in other cities, as well.

MIKE FOX: Samba groups in Sao Paulo paraded with floats depicting vultures, rats and a vampire in a harsh critique of continued corruption in Brazil.

The Rio de Janeiro Samba school Mangueira is honoring the Black LGBT councilwoman Marielle Franco, who was killed last year by assassins linked to paramilitaries and even the Bolsonaro family.

Bolsonaro’s violent, sexist, racist and homophobic rhetoric has also inspired right-wing groups and individuals to act on their hate.

CARLA AYRES, LGBT ACTIVIST: “Under the Bolsonaro government, there is a feeling of greater impunity and permission to hate. So we in the LGBT community are more afraid to walk on the streets, because even the police themselves are authorized to not protect us … We have to affirm that we are going to continue in the streets. This is our greatest resistance to not go back into the closest. We have to continue to resist, because if we let fear take over, they are going to annihilate us.

MIKE FOX: Though it might be hard to imagine, Carnival and samba in Brazil have a long history of social protest and resistance. In fact resistance is at its very roots. Resistance to slavery. Resistance to violent racism and discrimination.

LUCAS CUNHA, FREE LULA SAMBA GROUP: Carnival is a political act, from its very origins. Carnival was created by Blacks. Created by my Black people. In its essence it is an act of resistance. And from there you have the deconstruction of gender during Carnival. Everything that is freeing, you will see during Carnival. So it makes sense for Free Lula samba group to be performing for Carnival, because it’s a time when people should be free.