The Next Global Financial Crisis is Inevitable  (Pt 1/2)

It has been ten years since the last major financial crisis. With systemic deregulation undoing the safeguards, we are due for another crisis very one soon. Thomas Hanna, research director of the Democracy Collaborative’s Next System Project, says it is almost guaranteed

It has been ten years since the last major financial crisis. With systemic deregulation undoing the safeguards, we are due for another crisis very one soon. Thomas Hanna, research director of the Democracy Collaborative’s Next System Project, says it is almost guaranteed

The Next Global Financial Crisis is Inevitable 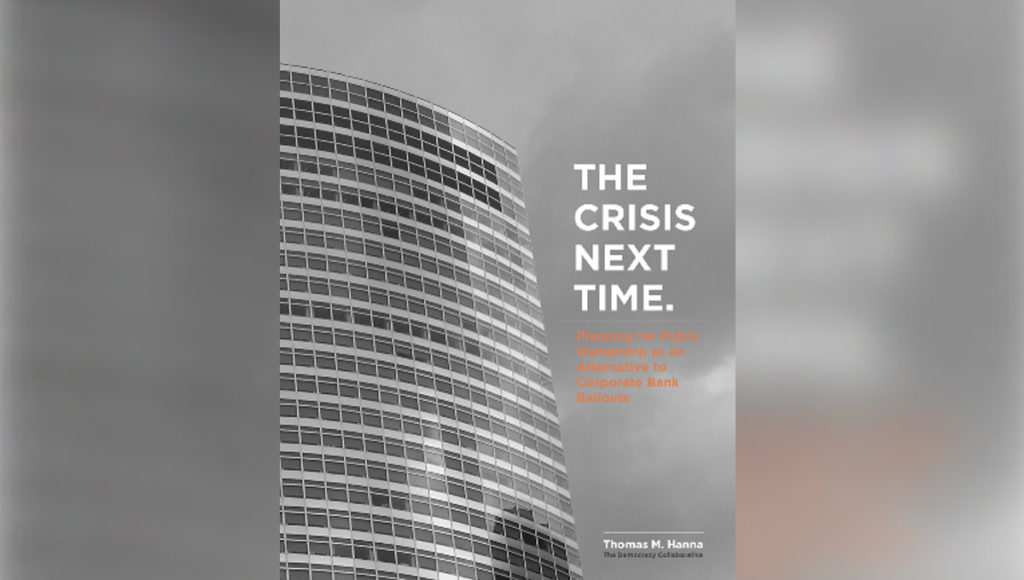 Will there be another financial crisis, or even another great recession like that of 2007 and 2008? A new report issued by the Next Systems Project argues that it is almost inevitable that there will be another major financial crisis. The report, titled “The Crisis Next Time: Planning for public ownership as an alternative to corporate bank bailouts,” looks at the history of financial crises over the past 70 years, and it predicts that another major crisis is very likely. Secondly, the report outlines a plan for how to deal with the next crisis. The calculated guess is that the next financial crisis could even be worse than the last one we experienced. And the report’s main recommendation is to create a public banking sector not only to cope with the next crisis when it happens, but also to prevent future crises.

Joining me now here in our Baltimore studio is the report’s author, Thomas Hanna. And Thomas is the research director at the Democracy Collaborative, to which the Next Systems Project belongs.

THOMAS HANNA: Thank you very much for having me.

SHARMINI PERIES: Thank you for joining us here. All right, Thomas, let’s take up this very important issue, because it is very solution-oriented. But let’s step back a bit and first, in our first segment, discuss, looking at history, why you think that there is a next crisis pending, and what are the indicators, what does history tell us. And then in the second segment we’ll take up what the potential solution that you’re proposing is here, which is public banking.

But let’s start with the first issue, which is you went back 70 years, and you took a look at the history of crises. And so based on that, tell us why there’s another crisis pending.

So if you look at what was instituted, the Dodd-Frank financial regulation that was instituted after the financial crisis it was a weak piece of legislation to start with you had experts coming out after the passage of the first of the Dodd Frank legislation saying that this would not have stopped the financial crisis in 2008, and it’s not going to stop another financial crisis. And all that’s happened since then has been that the law has been weakened systematically by Congress and by politicians, to the point where now you have a situation where financial regulation in this country is essentially dead in the water, or it has been systemically weakened to the point where it’s not going to be able to address another financial crisis.

SHARMINI PERIES: All right. Now, take us through how the regulations have been weakened. Not only just since 2007-2008, but it really goes back in terms of the last great financial crisis, the Great Depression, and, and certain laws were put into place to avoid that kind of crisis. But over time that all dissolved, because by the time we hit 2007 we have another crisis in place. So how has regulation deteriorated over time?

THOMAS HANNA: Yes. So in the Great Depression and the financial crisis that occurred that preceded the Great Depression, the policy response was set, was relatively strong. You had what is called Glass-Steagall, which separated commercial and investment banking, and you had the institution of the FDIC. Over time, in the immediate post-war period, that law was strengthened during a sort of golden years following the Second World War. Then, starting around 1970 in the beginning of the neoliberal period, it started to be systematically weakened over time. Slowly but surely, it was chipped away at to the point where in the late 1990s it was finally repealed by the Clinton administration with the acquiescence of the Republican Congress.

That process took a very long time. Took, you know, 50 years or so to systematically weaken that piece of legislation. What we’ve seen with Dodd-Frank is it was weaker to start with, and it has been systematically undermined much more rapidly than Glass-Steagall. So essentially, the regulatory way of trying to protect against financial crises does not work in the current context with the political economic power of large financial institutions in our economic system.

SHARMINI PERIES: Now, even since 2007-2008, and there was the Dodd-Frank bill that actually was supposed to control the financial sector it has been slowly unraveled. And part of this unraveling began even during the Obama era. It’s not just attributed to the Trump policies. So give us a sense of why that happened. Sure. So the financial sector has legendary political power in Washington, D.C. And this is bipartisan. It goes beyond Republicans and Democrats. In terms of lobbying, at least last year, or the year before that, they were the number two industry. They gave a billion dollars to people of both parties; financial contributions to campaigns of political representatives.

And even Republicans-. So, the concept of regulatory capture was founded, or, you know, came up with by conservative economists in the 1970s and 1980s. And this refers to the power of industry to capture the regulators who are supposed to regulate that industry. And that’s uncontroversial, and many studies have actually shown this is strong in the financial sector, and was a contributing factor to the last financial crisis in 2008.

SHARMINI PERIES: So now we have the possibilities of a another financial crisis looming because of deregulation. But on top of that, we have more and more concentrated power. And when people were discussing breaking up the banks, that actually didn’t happen. Now we have even stronger institutions, financial institutions, and probably why you and your reports say that the next crisis will even be deeper than the one we experienced in 2007-2008. So tell us about this concentration, monopolies, antitrust regulations that are on top of the deregulatory financial environment we are in.

THOMAS HANNA: Yeah, exactly. So out of the 11- out of the, I think, the top 15 banks that received bailout money during the last crisis, 11 are now bigger than they were before the crisis. Consolidation in the banking sector has been going on for decades. We have lost 7,000 small banks as they’ve been eaten up by larger banks during mergers and acquisitions since the 1980s. And that has continued apace. It was a- the financial crisis was a blip on the road to consolidation, and increasing consolidation in the financial sector.

So the banks that were too big to fail in 2008, that required the government to bail them out because if they didn’t bail them out it would have collapsed the entire capitalist system, are now bigger than they were before. And these, these banks are supposed to have living wills, or some way of orderly winding them down if another financial crisis happens. Almost every legitimate observer of the financial system realizes that this is not sufficient, and this is not practical, and that if there is another financial crisis what’s going to be required is another public taxpayer-funded rescue. So is that going to be a bailout? Or is that going to be something different?

Trump to Return Fannie Mae and Freddie Mac to the Private Sector: “Be Very Afraid”