In March, the DCCC announced its policy against progressive challengers of incumbent Dems. But the policy has been met with widespread scorn, and may be starting to backfire. Ryan Grim, Eugene Puryear, and Jacqueline Luqman discuss the situation

In March, the DCCC announced its policy against progressive challengers of incumbent Dems. But the policy has been met with widespread scorn, and may be starting to backfire. Ryan Grim, Eugene Puryear, and Jacqueline Luqman discuss the situation 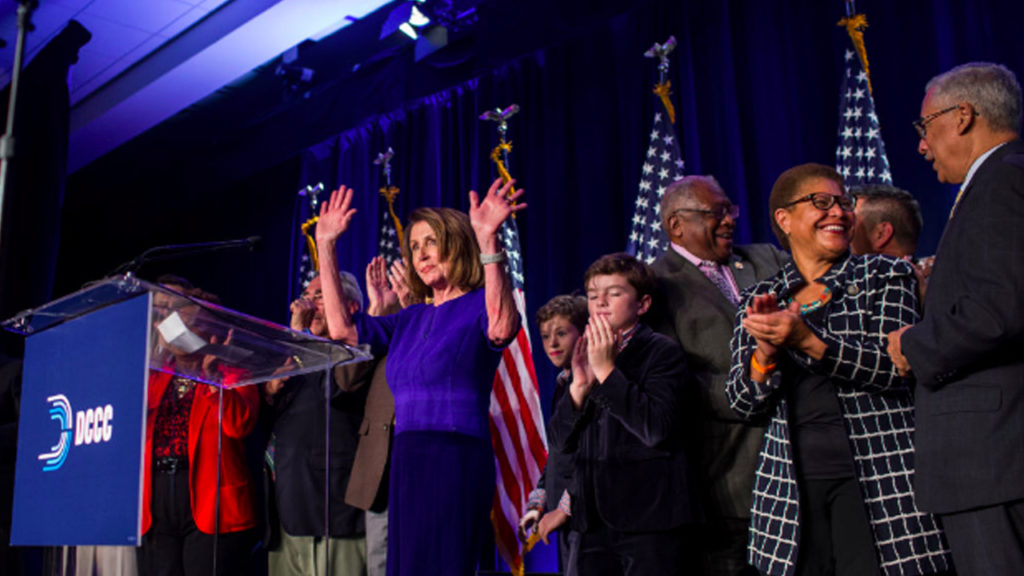 JACQUELINE LUQMAN Hi. I’m Jacqueline Luqman with The Real News Network. We’re continuing a discussion about the DCCC’s campaign that was announced a few months ago stating that they would blacklist any consulting firm that supported progressive candidates who are running against incumbent House Democrats. We talked in the first segment to Ryan Grimm with The Intercept about specifically the campaign in Illinois that is a challenge to Dan Lipinski’s campaign, and we’re continued in this discussion here with Eugene Puryear. Again, Eugene is a journalist, author, and activist and he’s co-founder of Stop Police Terror-DC and a member of DC’s Movement for Black Lives Steering Committee. Thank you for continuing on with me today, Eugene.

JACQUELINE LUQMAN So we talked about the overall policy and the overall opposition to this DCCC policy, which has actually been very robust since the story broke. As a matter of fact, congressional progressives have come out quite vocally against the policy. You have Ayanna Pressley who has tweeted her opposition to the policy, pointing out that were it not for support she received in her campaign, that she certainly wouldn’t have been a member of Congress. And Alexandria Ocasio-Cortez went even farther in her criticism of this policy to the point where she even posted links to websites, or campaign contribution sites, directly to progressive challengers that people can use, as opposed to giving their money to the DCCC that’s not going to fund any of the consultants to help these progressive candidates. There’s a lot of robust criticism of this policy already from existing Democrats, not just progressive Democrats. And as we talked about in the earlier segment, one of the criticisms of this policy is that it would serve to entrench power among basically a largely white, male, older and in the case of Lipinski and candidates like him, leaning toward the conservative policy type of Democrats. Why is that a threat? Why is that a problem for the progressive movement?

EUGENE PURYEAR Well I think in the short term, that is exactly what will happen. I think it’s a problem for a number of reasons. I think first and foremost, because a lot of these individuals have the wrong policies per se and certainly the wrong priorities in terms of how they implement them, and how far they’re willing to go. As I always try to say, I think that what we see with a lot of younger people— not just younger people but certainly the youth that are behind a lot of this new progressive wave— people want to start to see solutions that meet the scale of the problem. And most of the people in there now and quite frankly almost all of them at both sides of the aisle, really aren’t willing to meet the urgency of the time on so many of these different issues. They’re always looking to kick down the road, to look for half measures, to minimize it, but you look at things like the climate crisis. You look at the ongoing issues within the criminal legal system, racism in policing, mass incarceration. You look at violence against women and the entrenched nature of patriarchy. Certainly, you look at the stagnation of wages and the destruction and the evisceration of unions. All of these issues that have really been animating so much of the “progressive wave” we’ve been seeing, these are the issues that aren’t really getting a hearing, and this is why people are more interested in progressive primary challengers, and potentially in some cases, third party candidates because people want to see again, solutions that meet the scale of the problem, representatives who are accountable to their communities and those who elected them, and people who ultimately are willing to meet the fierce urgency of now. I think without that and anything that certainly puts a roadblock in front of that, is potentially not only bad just for progressive-minded people, but quite frankly for all people and the planet because progressive policies, it has to be said, are really the way we need to go if what we want to do is put people’s needs ahead and the planet’s needs ahead of corporate and private profit.

JACQUELINE LUQMAN So you brought up the great point of people wanting solutions to address the scope of the problems we face. And one of those problems is something you intimately focus on and that is police abuse and having a more accountable law enforcement apparatus, certainly a more just law enforcement apparatus. You wrote an excellent book called Shackled and Chained: Mass Incarceration in Capitalist America. Eugene, with a Democratic Party that’s on record as being more committed to maintaining the status quo that favors capitalism, neoliberal policies, and even in Lipinski case, truly conservative policies that aren’t anywhere near progressive— how do the Democrats make the argument to people who are facing issues like mass incarceration that they should vote for incumbents like Lipinski or anybody else that the DCCC is funding, at the expense of these progressive challengers?

EUGENE PURYEAR [laughs] Well I don’t know how they make the argument because all the arguments you could make seem so bad to me. I think the main argument that they make is this is a very diverse country, there’s a lot of different types of people, and if you want to move the country forward, you have to be able to build broad coalitions. And if you have a big tent Democratic Party and mainly Democrats in there even though there may be differences on the individual issues, in the context of the caucus itself, in the context of the team mentality that exists of everyone who has the “D” after their name, you’ll be more easily able to bring to bear the possibility to start to move things forward. I think that that’s not in fact the case. I don’t think that’s necessarily worn itself out to be true. One easy way to look at that is to look at say, how things have played out as it regards climate change, or as it regards many of Trump’s appointments. Or, if you want to be even a little bit more esoteric, you could look at what happened with the IDC in New York State at the state legislature level. The more conservative Democrats usually just block up with Republicans on critical issues and actually impede and obstruct progress. So I don’t think there’s much to that, but I think that’s the argument for it. But I think at the end of the day, and to speak to your point maybe a little bit more directly— that’s the type of thing that breeds the cynicism that makes people think, why would I engage at all if I’m really concerned? You’ve got 50 percent of adults in this country who have a family member who’s spent some time or another entangled in the criminal legal system. So this is a major issue to not even just on the front end with policing, but on the back end with reentry. And you think hey, I really want to support a candidate that cares about these things, but then you’ve got a caucus, a party, that can’t really speak clearly to the sorts of policies that would be necessary and be needed, and that in fact is actually dredging up the main architect of mass incarceration as potentially the savior candidate for the establishment’s interests. This is the type of thing that makes people think, why am I even involved or engaged at all when ultimately, these people don’t really respect me, and don’t really respect my vote? So I don’t think there’s good reasons for it. I think there’s reasons that have been put forward, but as I always also point out to people, since Reagan was elected— since before but let’s just go since 1980— the Democrats argued and pushed for this lesser of two evils politics. We got to have the lesser of two evils. We got to pander more to the center, more to the right. And what has happened in that time period since Ronald Reagan was elected in 1980, is a steady march to the right of the politics in the country, no matter which party was in power and no matter which party holds out the presidency. I think we have to start to look at the efficacy of and turn it around. Unlike this electability argument— the left isn’t electable; progressive politics aren’t electable. Where’s the proof that lesser of two evil politics, where having conservatives in a big tent movement is actually preventing the country from lurching more to the right? I don’t think that evidence exists. I think it’s important to push back on that.

JACQUELINE LUQMAN Well this is certainly an issue that we will continue to watch. We certainly haven’t seen or heard the last of the fallout from this policy from the DCCC. And even if the DCCC manages to squeak by in this next election, in holding the House, maybe it won’t be as long-lasting a win as they think for the very, very reasons that you just raised, Eugene. So thank you so much for joining us today here on The Real News Network.

JACQUELINE LUQMAN And I am Jacqueline Luqman from Baltimore.

Ryan Grim is the Washington bureau chief for The Intercept, author of This is Your Country on Drugs. He has written frequently about Gulf politics, particularly through the lens of UAE ambassador Yousef Al Otaiba.