In Trump Country, Progressives Say Democrats Must Embrace Their Ideas to Win

At the Mobilize 88 conference in Deer Creek Ohio, state progressives gathered to plot strategy and share ideas for how to organize successful campaigns based on progressive ideals

At the Mobilize 88 conference in Deer Creek Ohio, state progressives gathered to plot strategy and share ideas for how to organize successful campaigns based on progressive ideals 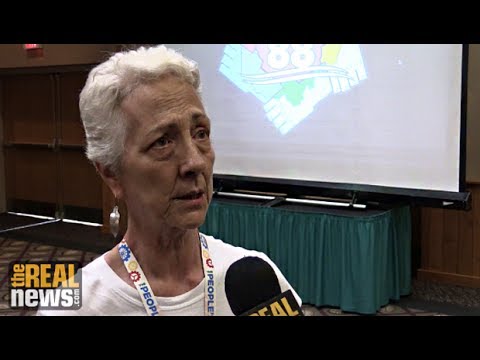 Speaker 1: We must do a better job of selecting people to represent us. That’s when we as Democrats must feel that our best is not enough.

Taya Graham: This is Taya Graham reporting for The Real News Network in Deer Creek Ohio. Since Donald Trump won the presidency in November, the nation has focused on Trump voters in states like Ohio where we are now. Little attention has been paid to progressive voices, which is why The Real News traveled to Deer Creek to attend the Ohio Progressive Alliance 88 Conference. It’s a gathering of progressive voters to strategize and organize for upcoming elections.

Portia Boulger: The focus is Ohio right now and it’s twofold to bring progressives together to build a strong progressive alliance across the state of Ohio, so that we will connect with other grassroots organizations and in that process we will connect through issues. If we focus on issues, there … Believe it or not, I know progressive Republicans and we’ve got a whole lot of progressive Independents, so this isn’t about party, this is about issues.

Janet Garrett: I’m a Berniecrat and I believe in all of the things that Bernie has put forward. I believe that we have to have not only $15 an hour, but we have to dedicate ourselves to continually raising that to keep a pace with inflation. We have to have a clean and safe environment. We are in such a small window of when we can address climate change, because if we don’t address it quickly and soon, it will be a runaway train that we cannot stop.

Theresa Gasper: I grew up Republican and in 2008 I started realizing that the rhetoric on the news wasn’t matching the reality I was seeing in the street. I renovate the neighborhood that I grew up in, in Dayton. It’s a historic district and I’m the fourth of five generations to live in the neighborhood and it’s a transitional neighborhood, it was starting down the slippery side of the slope. We were really hard hit by the foreclosure crisis and I started serving on housing related boards and learned very quickly that what you’re hearing on the news about people buying more house than they could afford, wasn’t matching in Dayton.

In Dayton, the people had owned their homes. More often than not, it was already paid for. Somebody lost a job, they lost their insurance, there was a major medical issue, and they were just refinancing to try to keep from going into medical bankruptcy. I just, at that point, I realized if that didn’t match up, what else didn’t? I just started reading anything I could get my hands on. I think I have over 300 books on my Nook and probably 75% of something to do with politics or whatever. I just, I love Bernie’s message. I love the progressive message. To me, it’s about taking care of the least among us. I just didn’t belong in the Republican camp anymore.

Joni: I feel like we’ve reached a breaking point that if we don’t start bringing back the wealth from the upper, upper, upper tiers, the people at the bottom are literally going to die. I mean, we’ve reached that point between healthcare issues, between poverty, homelessness. I have to say, even Bernie, I saw him in Charleston and I followed him very closely all throughout the primary and I campaigned for him in Scioto County, in Portsmouth where I live, and even he, I never heard him mention the tent cities. I didn’t hear anybody mention the tent cities. This country is full of tent cities. I’ve been in, most recently, the last couple years in Baltimore, in Seattle, in Portland, and I’ve seen the tent cities. I know we have them here in Ohio.

Michael Millisitz: This last election’s broken down a lot of walls. We’re starting to see that if we take a campaign and put it on issues that are focused on the working person, we can really start to break down that partisan divide and really get people on a common message of workers have been hurting for a long time in this country, and it’s because of the policies of our millionaires and billionaires in Washington that have put them there. I think that if we go out and appeal to people throughout the districts, we can convince people that we have a better plan with progressive policies that are going to help everyone.

Speaker 8: What do you think are the most important progressive policies that the Democrats or the progressive candidates should be espousing?

Michael Millisitz: I think right now, I mean, obviously there’s been so much focus on healthcare. Medicare for all really seems like the best way forward now. We’ve seen what the Democrats have to offer, we’ve seen what the Republicans have to offer. I think Medicare for all is a pretty simple solution. We can tweak that bill with a few pages probably and get it to cover everybody from negative nine months to death. Then we have universal coverage. The insurance companies really, they’ve proven themselves. I don’t know. You get an explanation of benefits in the mail, they don’t even know what you owe them. What good are they? They don’t really provide any service, other than to leech money out of the system and make everything more expensive.

Speaker 8: There’s been a lot of talk about how the progressive … Can you have progressive movement in the Democratic party? I assume you’re here because you’re a progressive. Is that possible?

Tristan Rader: Yeah. I think, absolutely. I’m one of the founders of the Cuyahoga County Progressive Caucus. We’re formally the Northeast Ohio for Bernie Sanders. Yeah, part of our model is to sort of bring back and actually live up to the Democratic party platform. We have a very progressive platform. I was a delegate to the DNC. We voice voted on the platform and I voice voted yes, because I thought it was a platform that I could believe in. Within that platform, we have mention of universal healthcare. Within that platform we have a $15 minimum wage on a local level. We just need to basically keep the Democratic feet to the fire to actually follow it. In Cleveland, it’s not being done. Same in Lakewood. It’s just not being followed by most Democrats and we have to challenge those Democrats that aren’t going to stick to their own party’s platform.