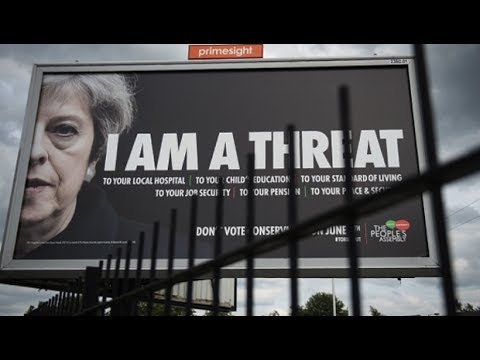 SHARMINI PERIES: It’s the Real News and majority of UK citizens agree that British foreign policy contributes to terrorism at home. You Gov conducted a poll four days after the Manchester attacks, regarding the link between foreign policy and terrorism and it found that 53% of the 7134 UK adults that were surveyed said that wars that UK has supported or fought in are in part responsible for terror attacks against the United Kingdom while 23% said they did not know and 24% said they disagreed.

On to talk about all of this with me today is Thomas Barlow. Thomas is of course, you’ve now become familiar with Thomas. Thomas has worked as a community organizer and activist. He’s the senior editor and co-founder of the UK independent news outlet, Real Media. Thanks for joining us Thomas.

THOMAS BARLOW: Thank you for having me.

SHARMINI PERIES: Here’s a part of what Corbyn had to say.

JEREMY CORBYN: Many experts including professionals in our intelligence and security services have pointed out the connections between wars that we’ve been involved in or supported and fought in in other countries such as Libya and terrorism here at home.

SHARMINI PERIES: Thomas, how significant are the most recent poll results in relation to what Jeremy Corbyn just said?

I think Jeremy at least addresses those points. He also addresses the lack of police and the lack of funding for the police. 20,000 officers gone. There’s a video doing the rounds now where Theresa May is warned about this by community policing officer from Manchester who had lost his job, who had to step down, who said you are leaving us open to terrorism and she said you shouldn’t scare monger. Well we are now reaping the costs of her decisions in that regard.

But there is a deeper point to be made here. I think Jeremy shies away from it. I think most of the establishment do as well. I think if the media is really doing its job, it would say, look Theresa May, you’re part of a government that has been since Lawrence of Arabia, supporting Islamic extremism in Muslim countries and specifically most recently causing the failed state of Libya where the bomber’s family came from, where the young man had been just days before he committed the atrocity, where we know that his family were part of an Islamist fighting group and were given passports by MI6. You’re in charge. You were in COBRA at that time. What do you say? Why are you not being held responsible for this?

It’s welcome that Jeremy’s made an intervention but I’d like to see a deeper intervention that says, one, why have we been supporting Islamic fundamentalist terrorism in the Middle East? I’d like those questions to be asked. For nearly a century now, why have we been doing that? Secondly, more specifically, why are we supporting specific groups like ISIS, al-Moosra, ISIS in Libya and so forth? Why are we supporting them with weapons, training, with money, with arms deals? Theresa May was just in Saudi Arabia 50 days ago and was just in Turkey, two countries that openly support ISIS. Why are we openly supporting these organizations?

First and foremost because they kill thousands and thousands of people around the world, but secondly because we’re being made to pay for these decisions that you’re making here. Why are we doing this? Why do we have to pay the costs? Why do human beings have to pay the cost and why are you not doing anything about it? These are the questions I’d like to hear the media ask. I don’t think we’re going to hear them because I think the media is largely, the press at least and the BBC is part of the same establishment that the politicians come from. I’m glad Jeremy’s made an intervention but I don’t think it goes far enough quite frankly.

SHARMINI PERIES: Right. Tom, let me play a clip from an exchange in the UK Parliament at the end of last year before Jeremy Corbyn and Theresa May.

JEREMY CORBYN: I remain concerned that the heart of this government’s security strategy also is apparently increased arms exports to the very part of the world that most immediately threatens our security. The British government continues to sell arms to Saudi Arabia which are being used to commit crimes against humanity in Yemen which has been clearly detailed by the UN and other independent agencies. Will the Prime Minister commit today to halting arms sales to Saudi Arabia that have been used to prosecute this war in Yemen with the humanitarian devastation that has resulted from that?

THERESA MAY: I think he used, implied that it was a threat to the safety of people here in the UK. Actually what matters is the strength of our relationship with Saudi Arabia on issues like dealing with terrorism, on counter-terrorism issues. It is that relationship that has helped to keep people on the streets of Britain safe.

SHARMINI PERIES: All right. Thomas what do you make of what the Prime Minister’s response is there?

THOMAS BARLOW: I mean it’s what we’ve come to expect from our politicians which is total flannel. I think in light of what’s just recently happened in my home city, I think it’s quite disrespectful actually. I’m glad that we have a leader in opposition party who’s there actually asking the questions that the press and other major political institutions should be asking. First and foremost, actually I stand corrected. Jeremy has asked the right questions and thankfully we’ve got him in the political landscape, at the head of a major party to do that.

Her response was, as we’ve come to expect from Theresa May, weak and vacillating and takes no responsibility for the fact that we know for a fact that atrocities have been committed by our so-called allies. They are not helping, they are not helping fight terrorism at all. They are supporting it. The weapons that we give to the Saudis and money that we give to the Saudis is going into the hands of ISIS, not just in Syria and not just in Iraq but also in Libya where people are coming from which is a total failed state on the doorstep of Europe.

She’s got to take responsibility and come up with a plan to actually deal with this, deal with the problems that are being caused by a foreign policy and deal with the problems that have been caused by our alliance with the Saudis and Qataris. There’s a fantastic interview with Max Blumenthal on your network. I suggest everyone watch this as well for a deeper and more thorough examination of who has come, where the bomber came from and the situation that it comes from, but I don’t see anything in what Theresa May has said there or elsewhere addressing that whatsoever. I think she happily avoids those questions all day if she can and she’s not going to ask them very often.

SHARMINI PERIES: All right Thomas. We must put this discussion we are having in the context of what’s happening at home. In places like Manchester which is the home of the attacks last week and your home and the home of Salman Abdi who was responsible, the suicide bomber. Now places like this in Manchester, healthcare has been cut back. Education has been cut back. Extracurricular activities for younger men like Salman has been severely curtailed so there’s unemployment, grave unemployment. How are people interpreting what’s going on in light of the discussion we were just having about the kind of spending that is going on in terms of military spending and wars abroad and what’s happening at home?

THOMAS BARLOW: Yes, as you say, Manchester has been a deeply underfunded city, ever since the de-industrialization of the eighties in the factories. It’s why Conservatives are not popular in this city whatsoever. Is that, the city’s been poor and been struggling to get back on its feet and just as it was starting to do so by about 2010, you just see massive cuts. The roads are in no shape. Social care is cut back. Community projects are cut back completely. Not just cut back, just disappeared. Libraries are shut down. Swimming pools are shut down. Things for people to do, to come together, to share, have been cut back.

The program then like the Labour manifesto, which promises to come with national and regional projects that people can come together and work together on, it provides hope, employment, wealth for especially regions like Manchester has been hugely welcomed and actually what you’re seeing is a large upswing in Labour membership in Manchester and greater Manchester and a larger amount of activity by Labour members as well, especially young members.

It has been welcomed, the Labour manifesto and it contrasts squarely with the Conservative plan, which is to keep cutting back. We’re not entirely sure why any longer because it hasn’t helped tackle the problem of the deficit. We just know that that’s something that Conservatives are committed to, cutting back and making elderly people pay for their own care. That’s not popular in Manchester. I think Labour Party’s manifesto is popular and also I think when people really think about what we need to do to tackle terrorism and the causes of terrorism. Again, Labour Party’s manifesto looks to be far more considerate and far more popular amongst at least Manchester residents.

SHARMINI PERIES: All right Thomas. I thank you so much for joining us and I look forward to your report next week.

THOMAS BARLOW: Thank you. Thank you for having me.