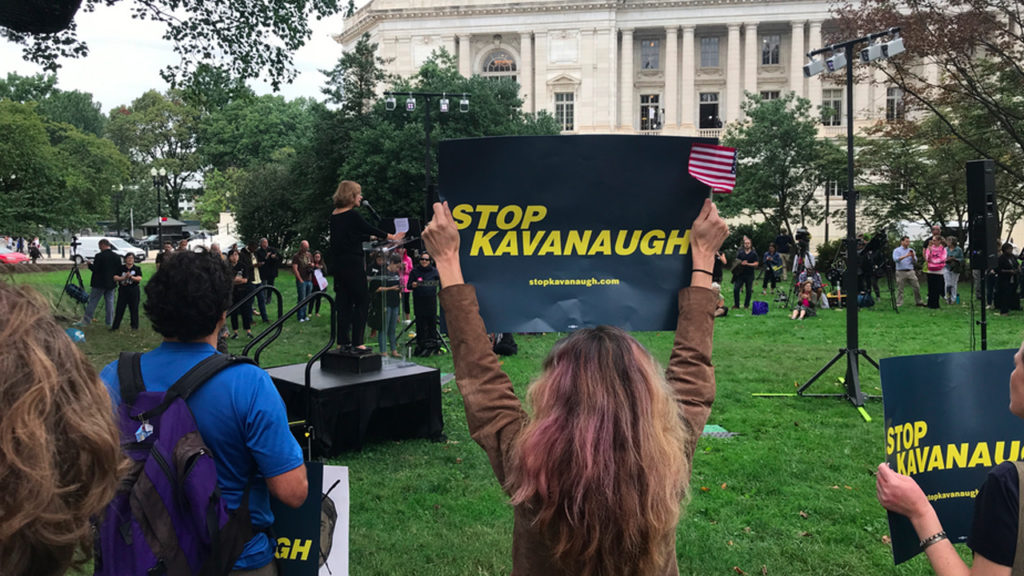 JAISAL NOOR: I’m Jaisal Noor for The Real News Network, reporting from Washington, D.C., where hundreds of protesters have gathered outside the Capitol to protest the nomination of Brett Kavanaugh to the Supreme Court.

ANA OROZCO: Kavanaugh represents a threat to all marginalized communities. Kavanaugh was deliberately nominated because he represents the systems of oppression that are interdependent on one another. He is representative of white supremacy, patriarchy, and capitalism, and that is precisely why he was nominated.

JAISAL NOOR: Confirmation of Kavanaugh at a final vote which is likely on Saturday would give President Donald Trump a victory in his drive to consolidate conservative dominance of the nation’s highest court, and move the American judiciary rightward. Republican Susan Collins and Democrat Joe Manchin, both regarded as swing votes, said they would support Kavanaugh on Friday.

JAISAL NOOR: A sharply partisan battle over his nomination became an intense political drama when university professor Christine Blasey Ford accused Kavanaugh of sexual assault when they were in high school in Maryland in 1982. Two other women also made accusations of misconduct by Kavanaugh in the 1980s. He angrily denied the accusations. Democrats say the FBI failed to talk to dozens of people who said their testimony could refute claims made by Kavanaugh under oath.

I talked to some of the hundreds of people that have gathered here to protest Kavanaugh’s nomination.

SUE: It’s a travesty what we’re experiencing right now, but I’m glad to be a part of the upheaval; to say no, this can’t go on. This can’t go on. Not in my lifetime. I’m tired of it. I was brought up in predominantly white state of Iowa, and I’ve been persecuted, and I’ve been sexually abused. A number of things that happened to me. And I’m glad that women are coming forward and saying stop it. Whatever it takes. It’s like what Frederick Douglass said, agitate, agitate, agitate.

ALYSSA RODRIGUEZ: Coming out of today, I mean, I hope that we continue to act beyond today and beyond, whether it moves forward or not. I think that we’ve really started to put things in motion, to really change, like I had mentioned in my speech, the message and the permeating rape culture in our society. And there’s no time like now to begin that.

CATHERINE BEANE: I think that this is a tidal wave that we saw start over the last several years, particularly picked up speed in the last year. And this is an amazing stepping forward of women together and finding their voices.

For YWCA, we’ve been concerned about Judge Kavanaugh’s record since his nomination came out on things like the constitutionality of the Affordable Care Act, which is so critical to the women and communities that we serve. We’re very concerned that Judge Kavanaugh on the court would take action that would be detrimental to the continued ability of that law to protect women and children. We’re really concerned about his record and what that would mean for fairness in the workplace. And then we are also concerned with the message that gets sent to women, to survivors, to everyone in our communities, if this man is confirmed.

JAISAL NOOR: I spoke to two alumni of Dr. Blasey Ford’s high school, Holton Arms, who were there to support her.

KAREN BRALOVE: The last two weeks, ten days, feels like ten years. Has been extremely powerful for me. I think women and men are learning that this, this affects everyone. I have never met a woman who has not had a Me Too moment. So I am afraid that he will be confirmed. But this movement is just getting started, and women are in an uproar, so hear us roar. It’s just the beginning of this movement.

GAYLE SQUIRES: It’s bubbling. I feel like this- and maybe there are going to be others. And there have been ones in the past. But this feels like a true inflection point. And people are coming together; women, men, really across all genders, to say that this isn’t fair. This is about respect. This is about respect for everyone. This is about treating humans like humans. And we don’t see that. We don’t see that right now. And I don’t think that this type of support and this type of resistance and revolt, I don’t think it’s going to end.

JAISAL NOOR: Stay tuned to TheRealNews.com for full coverage of Kavanaugh’s confirmation, including coverage on Saturday, tomorrow, when the final vote is expected to take place.

From Washington, I’m Jaisal Noor for The Real News.