With the election of neofascist Jair Bolsonaro as president of Latin America's largest country, the people of Brazil could hardly be more polarized. An election night field report from Mike Fox

With the election of neofascist Jair Bolsonaro as president of Latin America's largest country, the people of Brazil could hardly be more polarized. An election night field report from Mike Fox 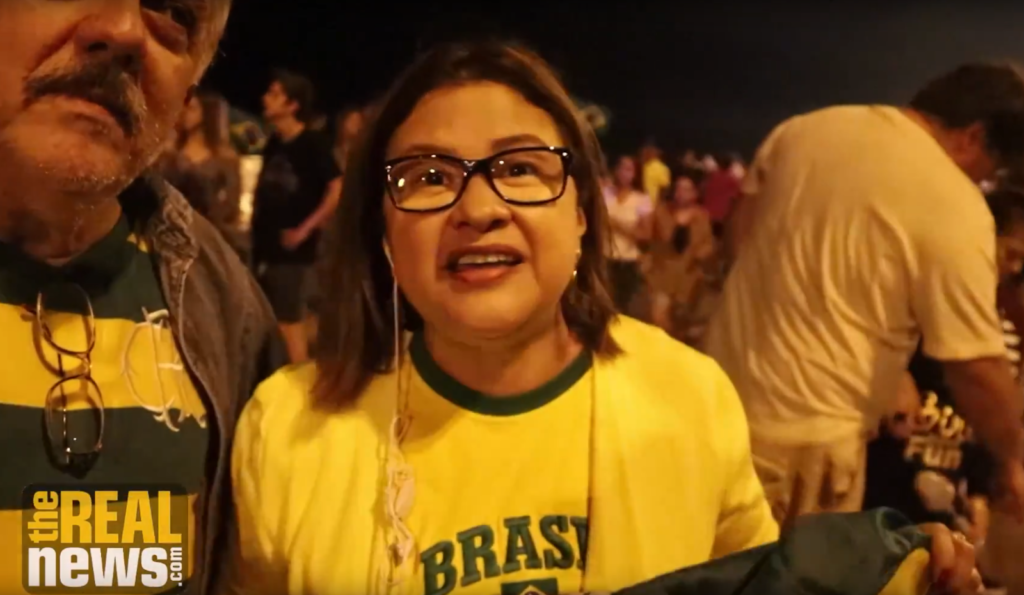 They danced. They sang. They chanted for their new president

Outside of his home in an upscale neighborhood of Rio de Janeiro, supporters were ecstatic as the results rolled in.

He won with just over 55% of the valid votes.

Lucia Malavasi, Bolsonaro Supporter: “The first thing he’s got to do is set up a new team. Clean up this old team of the old politics, who are only there to steal from us. So we hope this new team will make things better, improve our health, our economy, so our families can smile again.”

These people believe Bolsonaro can fix Brazil’s on-going issues of corruption, insecurity and the economy.

But across town, millions were devastated.

They are afraid that Bolsonaro will further spur rising hate crimes. And follow through with his promise to sweep away political opponents, and clamp down on activism, people of color, and freedom of expression.

They got a taste if it, as police cracked down on anti-Bolsonaro demonstrations in Sao Paulo and Rio de Janeiro.

Meanwhile, a parade of military vehicles road through a rally of Bolsonaro supporters in Niteroi.

This may be the new image of Brazil, with the military front and center.

On election day, supporters of the Workers Party candidate Fernando Haddad tried to counter the narrative of weapons and violence.

Across the country, voters carried with them books as a symbol of hope and education, in response to the guns that some Bolsonaro supporters took into the voting booths in the first round.

Bolivar Chalfun, Filmmaker: “Online, people started talking about voting with a book as a way to show their support for the candidate that represents democracy in this election.”

Paola Fernandes, Lawyer: “It’s better to vote with a book than with a gun. In the first round we had supporters of Bolsonaro who voted with guns, and that’s a country that I don’t want.

Liv Makino, Lawyer: “It’s peaceful resistance. To show that the difference is truly in education and remembering. That’s why I brought this book about the dictatorship to show that we have history and we can’t forget what happened.”

Haddad was greeted at his polling station with books, flowers, and umbrellas. His supporters sang of respect and equality.

The statements were an important gesture, but not enough to sway voters from the social media campaign and the powerful discourse focused on blaming Haddad and the Workers Party for the country’s woes – a narrative that has been pushed in the media for more than a decade.

But the act was likely also a symbol of the times to come. Resistance, carried out by countless individuals across the country, who will not accept attacks on their neighbors or a rollback in rights.

As Brazil is headed for the unknown, the country is more polarized than ever. Bolsonaro takes office on January 1st.