With the foiling of a coup attempt last week, the Sudanese military is consolidating its rule, despite having signed transition agreement for joint military-civilian rule. Gulf states want the military in charge, especially since Sudanese soldiers are fighting in Yemen, says Prof. Khalid Ahmed

With the foiling of a coup attempt last week, the Sudanese military is consolidating its rule, despite having signed transition agreement for joint military-civilian rule. Gulf states want the military in charge, especially since Sudanese soldiers are fighting in Yemen, says Prof. Khalid Ahmed 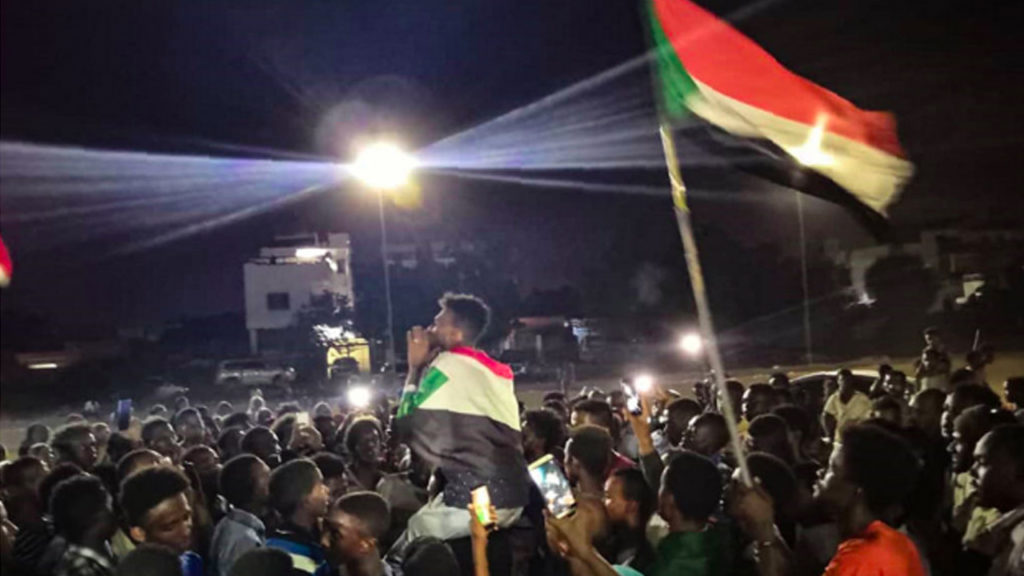 The agreement between protesters and the [Transitional] Military Council— also known as TMC— for a democratic transition in Sudan is no longer assured. The two sides were supposed to sign the agreement very soon. However, a major demonstration took place last weekend to commemorate the massacre of at least 128 protesters who were killed by the military in early June. And during this latest demonstration, paramilitary forces loyal to the government killed another protester. Demonstrations took place all over Sudan, and protesters repeated one word over and over: “madania,” which means “civilian” to demand a civilian government. Here’s what one of the protesters had to say.

SUDANESE PROTESTER To the people who are negotiating, we have one clear message: look at these crushed people. The people will not accept that their demands are circumvented. Their demands are clear, which are a civilian government, a democratic state, which is for a people that calls for justice and peace and love.

GREG WILPERT Just before the demonstrations last Thursday, the government said it had arrested twelve coup plotters before they could enact a plan to overthrow the government. We’re now joined by Khalid Ahmed to discuss the latest developments in Sudan. He teaches Political Science in the African Studies Department of the University of Toronto, and worked with the United Nations in Sudan in 2007. Thanks for joining us again, Khalid.

GREG WILPERT So let’s start with the alleged coup attempt. Was there or was there not a coup attempt against the military government, and was any evidence provided for it? And if there was one, who would have been behind it?

KHALID AHMED This is a good question and it’s clear that what everyone is actually saying on the street now, and especially the members of the opposition, is that the coup attempt is just propaganda that the military council is trying to use to prop itself up during the negotiations, and that’s not a strange tactic to use. It’s very well-known in mediation and negotiation theories that during the negotiations, normally the two different parties use whatever tactics they have to ensure that their size looks big and they look more influential so that they can get the most out of the deal.

For example, the military council now claims that they have saved the country from a military coup. Meaning, that their presence in power is necessary and important, and therefore people should not challenge them, and they should give them actually more space and power during the government. And the members of the forces of freedom and change also use their muscle as well, which is the people. They have instructed their people to go out on the street, and ask for justice and freedom to remind the military council that they are also very powerful, and they have millions of Sudanese behind their backs, so they better give more concessions during the negotiation. So in short, no, that wasn’t a real military coup.

GREG WILPERT Now, during the protest, as you mentioned, one of the slogans was actually from the Arab Spring. The people demand social justice and calling for democracy. But more than anything, the demonstrators, as I said in the introduction, were calling for “madania,” meaning civilian. Now, is this demand for civilian rule equivalent to a call for democracy, or is civilian rule whether democratic or not the main thing?

KHALID AHMED They’re basically asking for a civilian-led government that would lead the country and take the country and put it on a democratic path. Now, does that really mean that they don’t want any military officer of this government as part of the government? That is actually dividing the members of the opposition at the moment.

For example, some of them are saying that no military officer whatsoever should be in power. They should not share power. They don’t need to share power. And people went onto the streets and had to sit-in to oust the army out of power, so why would we share power with them now? They’re not really important. They’re not necessary. They’ve done their job. They should hand over the government to the civilians. On the other hand, some Sudanese and some members of the opposition say that well, there is no harm in having them in power for three years just to stop the bloodshed. And then after that, we will have an election, and then democracy will take over and no need for military presence anymore.

GREG WILPERT Now, the [Transitional] Military Council is receiving support from the Gulf States and from Egypt. And with the suppression of the alleged coup, the TMC and its external allies are basically strengthened, as you mentioned. Nonetheless, it seems like from the images we’ve seen that the protesters are optimistic, full of energy, and continue undeterred by the violence against them. Now, how do you explain this and how do you see the chances for an agreement to be signed to establish a civilian government?

KHALID AHMED People are vying not to stop. And they’re going to continue demonstrating until they achieve their objective, which is “madania.” As you mentioned earlier, it was a civilian administration and a civilian government. However, it’s not going to be an easy task to have that. Judging by what I see now, I think it’s very clear the level of foreign intervention in this disagreement— namely, the United Arab Emirates (UAE), Saudi Arabia, and Egypt. They are buying time. They’re allowing this military council to be in power for another three years in order to buy time to achieve their objectives.

For example, one of the objectives would be to continue receiving Sudanese soldiers to fight in Yemen for another three years if they need it, and if the war in Yemen continues for another three years. The second objective was to stifle any chance of democracy in Sudan because honestly, they’re worried about democratization in their own turf. So they do not want to see it. They’ve actually—All the other revolutions that took place in the so-called Arab Spring in Egypt, in Tunisia, and in Syria, they’ve tried to stifle them to prevent them from achieving democracy, which could shake their own rule in their own country.

GREG WILPERT Well, I think the point you make about the Sudanese involvement in Yemen is very interesting considering that the UAE just announced that it will withdraw its own troops. So does that mean that they’re perhaps going to be replaced by Sudanese troops in order to continue the war in Yemen? In which case, the intervention in Sudan would be extremely important, especially for Saudi Arabia.

KHALID AHMED Even more so now. Yes. The presence of the Sudanese is going to be more important than before— even though, as the vice chair of the military council announced, that Sudan has 30,000 men fighting there. Actually, I don’t think they’re men. We should say, child soldiers fighting in Yemen. But 30,000 is a huge number and I expect that number to increase now that the Emirates are pulling out of Yemen. But the question is, how does that impact the sovereignty of the Sudanese state at the moment? How does that impact the quality of any peace agreement that is being negotiated now with the military council? I think it’s going to make it very hard and difficult for the military council to work with the civilian administration that its proposing to have right now, because the deal is composed of a sovereign council with the army represented by five generals, five civilians, and an 11th jointly-chosen civilian. But then there will be a cabinet that is fully civilian, and then there will be a legislature.

Now, the civilians are demanding that 67% of it is going to be allocated for the members of the opposition. But here is the question, and here’s the problem that is happening right now: will every decision that these legislators, every policy that these legislators enact, would it be approved and stamped by the sovereign council? Burhan, the Chair of the Transitional Military government is saying, no. We need to review all the policies that are going to take place, and kind of give it a veto or have the right to veto it in case it doesn’t align with our interests as well as the security of the country. That’s how they claim it, because after all, they claim the only reason why they’re in power is because they want to ensure the security and the safety of the country.

But does that mean that it’s only going to be a facade? Meaning, the civilian government enacts policies, but they don’t really get implemented? That’s a huge question and that’s why the delay right now in signing that peace agreement. I mean, the agreement between the two parties, because they want to take away this ability of the military council to intervene and change and stop or veto any decision.

GREG WILPERT Well, unfortunately that means that we’re going to be continuing to follow this situation as it continues to develop, and we’ll probably come back to you very soon. Thanks so much, Khalid, from the African American African Studies Department at the University of Toronto. Thanks again for having joined us today.

KHALID AHMED Thank you for having me. I appreciate it.