Steve Miller and the Nationalist Takeover of the White House

We are in a battle to stop white supremacy from seizing power, says TRNN contributor Jacqueline Luqman

We are in a battle to stop white supremacy from seizing power, says TRNN contributor Jacqueline Luqman 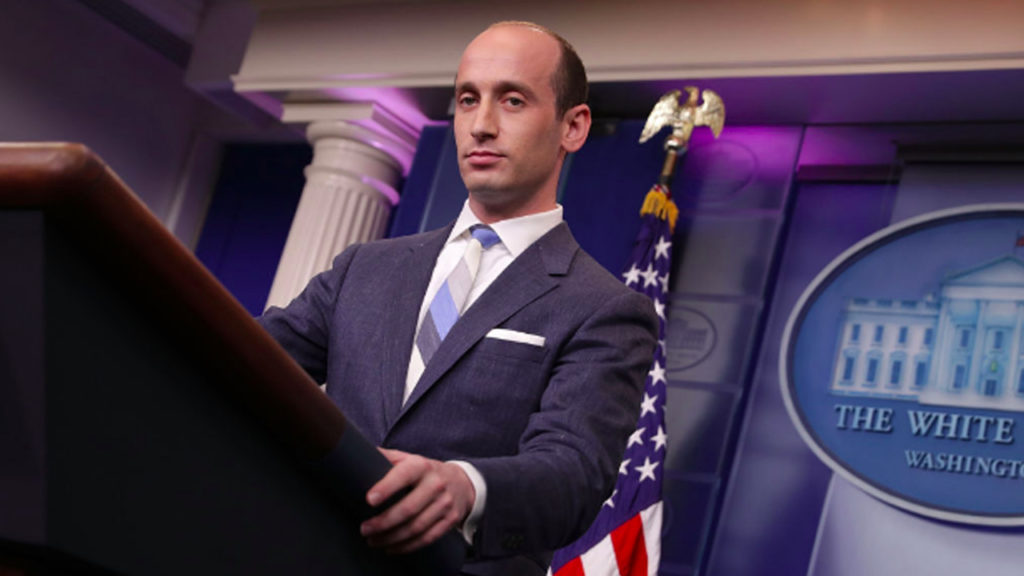 MARC STEINER: Welcome to The Real News Network. I’m Marc Steiner. Great to have you all with us. This is the third part of our conversation today about what’s happening in this week’s news. We are going to look at Stephen Miller in the Trump administration and the power of the white nationalist Right in that administration. What’s happening is emblematic of what’s happening inside the Department of Homeland Security. We are joined here once again by Jeff Cohen, who is founder of RootsAction.org and the media watchdog group Fairness and Accuracy in Reporting, and author of Cable News Confidential: My Misadventures in the Corporate Media, and Jacqueline Luqman, who is Editor-in-chief of Luqman Nation and a regular contributor here at The Real News. So let’s jump right into this. This is pretty stunning that Stephen Miller has got all this power in the White House, one of Steve Bannon’s proteges and Jeff Session’s righthand for a long time, and he’s a survivor. Bannon was thrown out. Maybe he didn’t know how to dress right. I’m not sure, but he was thrown out and switched to Stephen Miller. He’s there but he’s changing the dynamic of this administration. He seems to be moving them further to the right, pushing for these changes first in the D.H.S., Homeland Security. So tell me what this portends for the two of you. Jeff, let me start with you again.

JEFF COHEN: Well for saying the obvious truth, Miller is a white nationalist. He’s an immigrant basher. One of the weirdest schemes exposed by The Washington Post with really good sourcing, is that they had a scheme. They were going to take detainees at the Mexico border and transport them to places like San Francisco and put them in sanctuary cities. They take people they’ve got under arrest in custody and bus them to these cities that are sanctuary cities. It’s utterly outrageous. If the Democrats weren’t so obsessed with Russiagate, they might talk about this kind of craziness is impeachable. To me, the most interesting thing about Stephen Miller is his wonderful uncle, Dr. David Glosser. I’ve read his columns. I’ve seen him on Democracy Now! He points out that if it wasn’t for restrictive immigration, dozens of Stephen Miller’s ancestors would not have been killed by the Holocaust that in 1924, was this restrictive immigration law and then there were a bunch of anti-Semites in the State Department. Even with the rise of fascism and the rise of Hitler, they wouldn’t let these people in, and they died. So there’s a lot of sympathy for refugees in the Jewish community. Stephen Miller is an exception.

MARC STEINER: That’s the truth. I’m sorry he’s part of the Jewish community, but he is. But anyway, we’ll play this short clip here of his comments in a press conference about Emma Lazarus and what it really meant.

REPORTER [CLIP]: The Statue of Liberty says “Give me your tired, your poor, your huddled masses yearning to breathe free.” Doesn’t say anyting about speaking English or being able to be a computer programmer. Aren’t you trying to change what it means t0 be an immigrant coming into this county if you’re telling them you have to speak Enlgish? Can’t people learn how to speak English when they get here?

STEPHEN MILLER [CLIP]: Well, first of all, right now it’s a requirement that to be naturalized you have to speak English. So the notion that speaking English wouldn’t be a part of immigration systems would be actually very ahistorical. Secondly, I don’t want to get off into a whole thing about history here, but the Statue of Liberty is a symbol of liberty enlightening the world. It’s a symbol of American liberty lighting the world. The poem that you’re referring to that was added later was not actually part of the original Statue of Liberty. But more fundamentally, the history-

MARC STEINER: Looking at Steve Miller, he first had his history wrong about Emma Lazarus. She wrote the poem to raise money for the Statue of Liberty. It wasn’t just plucked from there later, but this becomes a real issue. This whole thing of changing people in the D.H.S., moving in people who were further to the right and tougher. As Donald Trump has said, we want tougher people in there and what Jeff was talking about earlier, dumping people in sanctuary cities. This is– will the Democrats stand up and see this as a war for the future of our country?

JACQUELINE LUQMAN: Have they yet?

JACQUELINE LUQMAN: Too few. I think, too few. Listen, all of these policies that are coming from Miller and through Trump. Trump saying, I think yesterday I read in Politico that Trump said, “I’m the architect of these policies, no one else.” We all know that it’s really Stephen Miller, white nationalist Stephen Miller. There, I said it too. These policies come out of this white nationalist terror of the browning of America that’s just trying to stop this tide of the population, the white population of this country, becoming a minority statistically, numerically and more brown people coming in and taking over and usurping. I’m intentionally using that word because that’s how they see it. They’re standing in their power. So these policies are really meant to be exactly how they look: draconian, inhumane, evil, exclusionary, and they know that these policies will probably be challenged by a federal judge. This binary choice foolishness is just family separation that was halted by a judge…

MARC STEINER: Even Kirstjen Nielsen didn’t like it in the end and pushed back, which is one of the reasons she was pushed out.

JACQUELINE LUQMAN: Exactly, but this new binary choice business is just family separation, but supposedly giving the asylum seeker a choice to be either deported or detained with your family, or you can choose to have your family separated in separate detentions. It’s all exactly what it looks like. It is the demonization of brown immigrant people and it is white nationalism and white supremacy in action. The Democrats are too slow to respond to this the way they should.

MARC STEINER: Let me pick up on that point as we close out here. How dangerous do the two of you think of the situation we are facing with this very white nationalist crowd, managing and running the Executive Branch of the United States, and what that portends? I think people sometimes don’t talk about this aspect of it enough. What do you think we’re really facing here and what are our challenges, Jeff?

JEFF COHEN: I think this is a more dangerous time than during Nixon and Watergate. I have wanted the Democrats to talk about some of the racism and the violence, and the affronts to the Constitution from the Trump administration in the context of impeachment. Not Muller, not Russiagate, but these real attacks on big sectors of our population. The Muslim ban, it should have been talked about in the context of impeachment. This administration is unfit. Trump is unfit. He’s not against immigrants. He’s married two of them. As Jacqueline said, he’s against Latino immigration. He’s against Black immigrants from what he calls “shithole countries,” or “shithouse countries…”

JEFF COHEN: He thinks we should have more immigrants from Denmark. We are in a real dangerous point in U.S. history and I think Progressives, sometimes maybe we have to lower our voices. I know I work on it myself because we are at a real crossroads in terms of whether we are going to move in a progressive direction, or whether we’re going to head to a more fascistic direction. Things are very dangerous today.

MARC STEINER: I agree with that assessment, Jeff. And very quickly, Jeff, just to pick from that point from your perspective, sometimes people think there’s a danger zone. Progressives can get very narrow in their thinking about this, not thinking of a broader group of people who can say “no” to what we’re facing.

JACQUELINE LUQMAN: Yeah. This is, I think, a more dangerous time for this country in that this particular administration is overt, and very overt in its aims and goals. But I think I need to be clear that white supremacy has been a problem in the United States government in the way some policies have been enacted towards certain groups of people here, for a very long time.

JACQUELINE LUQMAN: Surprise, surprise. White supremacy isn’t new in the United States government, but I agree that as far as where we want to be or go as a nation is concerned, we either turn it around now and do something about this particular administration, or I don’t think there is going to be an ability to come back. We’re going to cross the Rubicon, here. I think we’re right at the banks and we have to do something more than just empty rhetoric.

MARC STEINER: We can’t allow ourselves to become another 1877 redux of the end of Reconstruction. I want to thank you both for being here. Jacqueline Luqman and Jeff Cohen, thank you both so much. It’s been a great conversation. I appreciate your time. And I’m Marc Steiner here for The Real News Network. Thank you for your time and joining us. Take care.