The stateless people in Sabah, Malaysia are denied access to schools, jobs, and healthcare, and their village is facing demolition. They have found advocates in the youth movement Borneo Komrad.

The stateless people in Sabah, Malaysia are denied access to schools, jobs, and healthcare, and their village is facing demolition. They have found advocates in the youth movement Borneo Komrad. 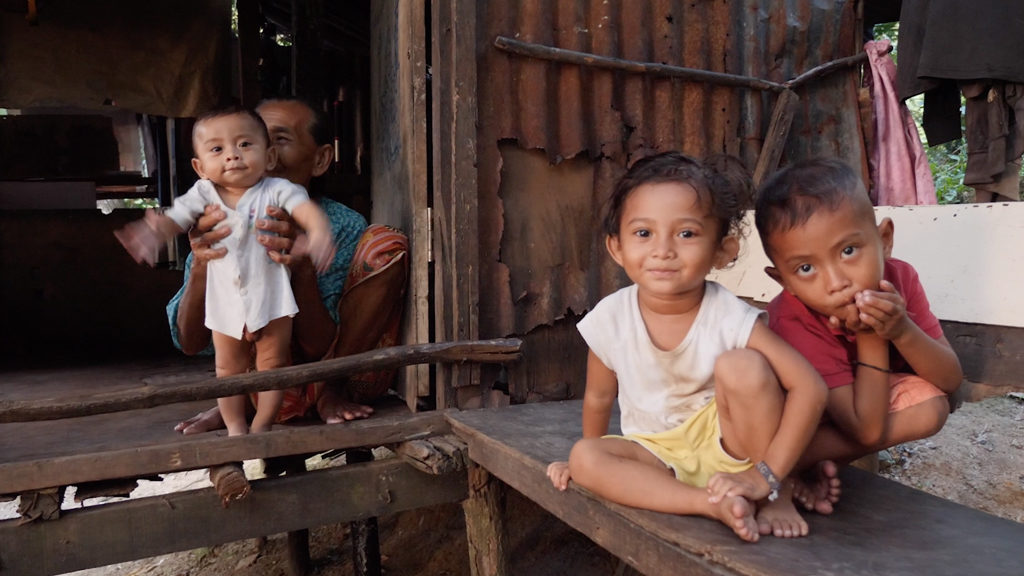 ABDUL RAIS BIN, LAYANBASAR LEADER: We have lived here for over 40 years. We’re the ethnic Bajau people. Once sea nomads, now we live by the beach. We’ll live here forever to strengthen this village and keep it strong.

JAISAL NOOR: Abdul Rais Bin is the leader of Layanbasar, a village facing the threat of demolition. The 20 families that live here are among the hundreds of thousands of stateless people in the Malaysian state of Sabah. No country considers them citizens. Many live in deep poverty and their plight is a stark contrast to the majority of residents of the wealthiest large country in Southeast Asia. This is Ann Balthazar, who has studied their communities for years.

ANNE BALTAZAR: There’s recent statistics that one third of the population are non-citizens. I think that would be quite accurate.

JAISAL NOOR: According to the UN, “There are at least 10 million people worldwide who are denied a nationality. Their problem often remains unseen and unheard, leaving them marginalized and invisible to the wider community.” Malaysia’s official poverty rate is just 0.3%, but a recent UN fact-finding mission found it’s actually a much higher.

PHILIP ALSTON: In reality, Malaysia seems to have a poverty rate which is closer to that of most other countries. And that is something like 15%.

JAISAL NOOR: Those numbers are so low in part because the stateless people aren’t counted in official tallies and critics say the government uses these artificially low numbers to avoid assisting those living in deep poverty. Kota Kinabalu is the capital of Sabah, located in the North of the Island of Borneo, the easternmost part of Malaysia. It is a tourist destination known for its coastline, beaches and street markets, but unknown thousands live in the shadows in villages without running water or electricity. Some have lived here for generations, but because they lack official documentation, they’re denied access to government programs.

JAISAL NOOR: A lack of access to schools is a major problem for stateless youth.

ANNE BALTAZAR: So without having education, without having a place where they can go to and learn, they are exposed to other things and they become easy prey to syndicates. We have begging syndicates and there’s also human trafficking happening here.

JAISAL NOOR: Being undocumented means it’s hard for them to advocate for themselves, but a local youth movement has taken up their cause, launching a campaign to halt the village’s demolition and building and running schools in the village. This sign warns passersby to keep out.

MUKMIN NANTAG: Okay. Basically, we are inside the university. Going down there is a community, but the university actually doesn’t allow us to pass by.

JAISAL NOOR: But this hasn’t deterred this group of students at the University of Malaysia-Sabah. They created a movement to help aid the community of stateless people located a short walk from their campus.

MUKMIN NANTAG: My name is Mukmin Nantang. I am from Tawau, Sabah, Malaysia.

JAISAL NOOR: This is Mukmin Nantang, founder of Borneo Comrade, the youth organization that advocates for stateless children. He brought us to a village which is home to about 20 families. It’s not accessible by road, only by beach or this trail through the forest. About 60 children live in this village. Because they are stateless or undocumented, going to a government school outside their village puts them at risk of encountering police who can detain them if they don’t pay a bribe. That’s why the student movement, Borneo Comrade, started a school here. The school was originally in this clearing, but a permanent structure was built in April. It’s a non-traditional alternative school that focuses on the needs of the students. Juan Shakila started off as a volunteer, but now administers the three schools run by Borneo Comrade.

WAN SHAKILA: She is a Saima, 14-years–old, one of our students here. This school is her first school. She knows how to write and read.

MADOR: My name is Mador. I have a child studying in the school in the village. I believe the school is good. The children are learning, and read and write, and that really helps the village a lot.

WAN SHAKILA: Basically, this is the space for the kids to study and learn. So those tables are also made by the students. We will arrange the tables here, and the teacher will sit here and teach everyone. So we got around 25 students here. They didn’t have basic education, so barely day zero. Although they are 15 or 16, they didn’t know how to read and write. Yeah. So that’s why we gather them out.

JAISAL NOOR: Despite the challenges, this village is blessed with tremendous natural beauty on a sloping hill overlooking the South China sea. The sunsets are breathtaking, but the residents do live in deep poverty. There’s no running water or electricity. As many as a dozen people live inside these walls that provide little protection from the elements. To make matters worse, there’s little access to modern medicine.

UNDOCUMENTED MALAYSIAN MAN: I can’t work because I am ill.

UNDOCUMENTED MALAYSIAN MAN: I have very bad asthma and get breathless very easily.

JAISAL NOOR: Malaysia offers free healthcare for citizens, but for stateless people, the cost of medical care can be prohibitive and the fear of arrest also keeps them away.

ANNE BALTAZAR: More than 50% of the children have close family members who have been arrested.

JAISAL NOOR: 10 of his family members live with him here. I asked him what gives him hope.

UNDOCUMENTED MALAYSIAN MAN: My hope is my children will go to school and get an education. My children will make some change, which is to make our family better. And because I’m already old and sick and can’t work, my children are my hope. I am 45-years-old.

JAISAL NOOR: Since he was unable to make the short walk, he asked his wife to take us to the graveyard on a hill just above their home. Buried there is his son who recently died from a skin infection, a curable illness, along with several young grandchildren who have also recently passed away. Despite all of these challenges, the villagers face a more pressing threat.

ABDUL RAIS BIN: All the buildings have been spray painted with this blue text, which means the government has marked them for demolition.

JAISAL NOOR: Because Malaysia’s stateless people are not considered citizens, they are demonized and stereotyped in similar ways immigrants are in the West.

ANNE BALTAZAR: When there are crimes or anything, a fire or whatever, it’s always blamed on, here they would say “illegal immigrants.”

JAISAL NOOR: The government argues because the villagers are undocumented, they could be harboring criminals or even terrorists, but advocates like Neldy Jolo says this underscores the need for systemic solutions.

NELDY JOLO: We just don’t know why it’s not looking at the long-term solutions for them to get documented. And there are also many suggestions that instead of getting new workers from outside the country, it’s better to legalize these undocumented so that we can hire them legally.

WAN SHAKILA: We make demonstration and protest in front of the city council at the office of Parliament of Sapanggar, which is responsible here, to take care of this part.

JAISAL NOOR: Villagers remain steadfast in their desire to stay in the village that has been their home for decades.

ABDUL RAIS BIN: We want people to know we want to live in this village. This is our home.

Xi Jinping: China’s ‘Chairman of Everything’