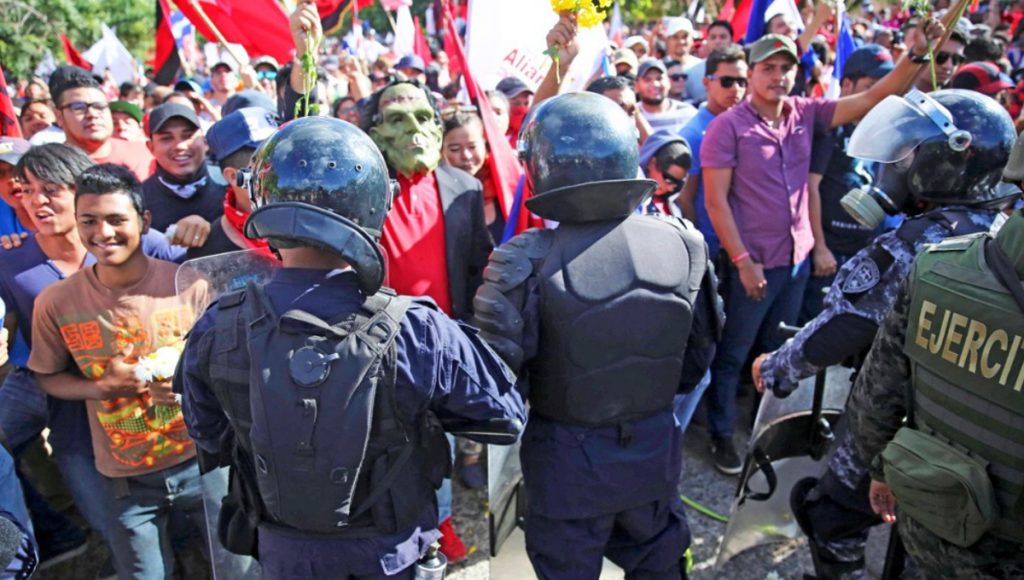 JESSE FREESTON: On January 27th, 2018, in the National Stadium in Tegucigalpa, Juan Orlando Hernandez was sworn in for his second term as president of Honduras.

J. HERNANDEZ: [In Spanish] We need to listen to one another. We need to unite the country. Because, as Jesus said in Mark 3:24-26, listen closely, “A house divided against itself cannot stand.”

S. MARIBEL SÁNCHEZ: [In Spanish] I have been doing journalism here for 33 years, and I have never seen an inauguration like this. The ceremony is militarized, which shows you how afraid the man inside is of the people’s protest. There’s no other way to explain it. The whole world knows the election was fraudulent. Nobody is even debating that anymore. And of course the presence of this many soldiers and cops in the streets guarantees human rights violations, because they have orders to disperse the people, even if that requires live bullets.

JESSE FREESTON: The major opposition march to the stadium was broken up with tear gas almost immediately. The same tear gas that’s still being imported from the same factory in Pennsylvania as it has been since at least 2011.

Speaker 3: They spend all this money on tear gas to repel us, which is unjust, when there’s no medicine in the hospitals, and our schools don’t even have chalk, the teachers have to buy everything.

JESÚS ISIDRO LÓPEZ: I’m Jesús Isidro López. They’re unjust detaining us. We were on our way home and … [car drives away]

JESSE FREESTON: With their plan A thwarted, smaller groups attempted to use back streets to get to the stadium. But military and police were waiting for them around every corner.

Speaker 6: [In Spanish] They gassed us for protesting. Protesting because we won’t accept this shit any longer. All these taxes. All this unemployment. We can’t take it anymore in this country. It’s not even worth voting because they don’t count the votes. Salvador Nasralla probably won with 80 percent.

Speaker 7: [In Spanish] The president must be filled with shame. The people are in the street and he’s hiding. Where’s his dignity?

JESSE FREESTON: After 60 straight days of having their protests dispersed, some new homemade forms of self-defense have begun to appear.

JESSE FREESTON: [In Spanish] You made this?

JESSE FREESTON: How did you make it?

Speaker 8: With a barrel. It’s a barrel, look. You can copy it easily.

We are the people. We were headed to protest at the stadium when they attacked us with tear gas. It’s a real shame this is happening in our country. We are asking the president to correct the wrongs he’s doing against the people. If not, the situation could end up in worse things than this.

JESSE FREESTON: After being hit in the head with a tear gas canister, photographer Orlando Sierra took the opportunity to edit and upload some of his photos.

Speaker 10: I tried to tell him that.

JESSE FREESTON: As the events of the inauguration wrapped up, some groups blocked the main boulevards to be used by the buses leaving the stadium. They held this section for at least an hour before being pushed out by hundreds of police and military.

When the buses did make it through, people were seen waving 20 and 100 lempira bills worth roughly $1 and $5 U.S. respectively.

Speaker 11: [In Spanish] We’re waving bills at the buses leaving the inauguration because they pay them to go, sometimes 20, 50, or 150 lempiras, and just now a young man flashed us a 500-lempira bill. So today they’re giving 500 lempiras. That’s why we’re waving the bills.

JESSE FREESTON: As one bus passed, a woman pressed one of the 500 lempira notes against the window, worth about $25 U.S. Later on Facebook a commentator wrote, “It must have been an important day to get 500.”

Despite these efforts, the regime was unable to fill the stadium.

Speaker 12: [In Spanish] We’re feeling good, happy, and proud, because the greatest president in our history is being sworn in for a second time.

JESSE FREESTON: [In Spanish] What makes him the greatest president?

Speaker 12: [In Spanish] Security. He’s improved the lives of many citizens living in precarious conditions.

Speaker 14: [In Spanish] Overjoyed. We’re supporting democracy in our country.

Speaker 15: [In Spanish] Hernandez has had huge balls and knows how to control the security here.

Speaker 14: [In Spanish] We know that these next four years with President Hernandez are going to improve what was, in one way or another, in a situation of neglect, like health care. And we know a much better situation is coming, and we have faith, that’s why we’re here.

Speaker 15: [In Spanish] Our president is with those of us that have little resources. We’ve gotten a lot of help, for which we thank God first, and second our president Juan Orlando Hernandez. Houses, food, floors, and security.

JESSE FREESTON: The help they’re talking about is a program called Vida Mejor, or A Better Life.

J. HERNANDEZ: [In Spanish] Nobody will be excluded from the greatest social program in the history of Honduras, whose name is ‘Vida Mejor.’

JESSE FREESTON: Freelance journalist Jeff Ernst, who has been reporting from Honduras for the New York Times and Univision, went to the countryside to investigate the Vida Mejor program.

Jeff Ernst: So in the lead up to the election, Vida Mejor representatives were going out, offering all kinds of benefits in exchange for people’s votes, essentially. So in a town I visited, called [inaudible] where they voted with the highest percentage for Juan Orlando, the people voted for the National Party, voted out loud. And by that I mean they rioted a table, registration table to get their ballots, instead of filling it out themselves, they told the National Party representative who they’re voting for and that person had filled out the ballot for them.

And the reason they did that is because they found out they were Vida Major representatives at the tables. And these people know everyone who’s receiving the benefits and everyone who’s they’ve made deals with. So people were at risk of either losing their benefits that they’ve already been enrolled in, or not getting new ones that they’ve been offered.

Vida Major for example, is about $500 a year. For people in extreme poverty this represents a very large part of their income.

JESSE FREESTON: Some of the activities seen outside the inauguration reminded Jeff of election day.

Jeff Ernst: I spoke to one woman who was a Vida Mejor representative, and she was carrying a clipboard with names and identity numbers of all the people she brought with her and she’s making sure they show up, and there’re all given bags of food. So essentially a lot of these people are being compensated some way or another for showing up today.

Speaker 16: [In Spanish] All of us from the neighborhood came here by bus.

JESSE FREESTON: [In Spanish] Who organized the bus?

Speaker 18: This is Chanito, he’s famous here in the capital. Nice to meet you. Where are you from? Ah, Canadian. Welcome, you see there’s peace and tranquility in Honduras, yah?

JESSE FREESTON: Later in the day, video surfaced of moments where the free food ran out, and hungry people, having been bused a long way from home, showed their frustration with the broken promise.

Speaker 6: [In Spanish] Mr. President, we are asking you to please step down. To understand that the people don’t want you. By buying those people in the stadium, you’re playing with their hunger and their dignity. Look, Mr. President. We’re just starting to arm ourselves. Just a start, better stuff is yet to come.

J. HERNANDEZ: [In Spanish] I want to express our gratitude to the international community, for the support they have always given to Honduras in our democratic steps forward and in our challenges, in the good and bad times.

JESSE FREESTON: Not a single country flew in a foreign minister or head of state for Hernandez’s inauguration. But while they may not want to have their picture taken with him, the following governments continue sending the money and weapons that keep this regime standing.

Canada, Germany, Israel, Japan, The Netherlands, Norway, South Korea, Spain, Switzerland, Taiwan and the United States of America. As well as multinational institutions such as the European Union, the World Bank and the Inter American Development Bank.

Reporting from Tegucigalpa, Honduras, this is Jesse Freeston.