Some Candidates Have Climate Plans, But Are They Climate Justice Plans?

At Netroots Nation 2019, 350.org's Thanu Yakupitiyage says she's looking for every presidential candidate to release tangible climate plans, bring frontline communities into the room, and take on the fossil fuel industry and its money

At Netroots Nation 2019, 350.org's Thanu Yakupitiyage says she's looking for every presidential candidate to release tangible climate plans, bring frontline communities into the room, and take on the fossil fuel industry and its money 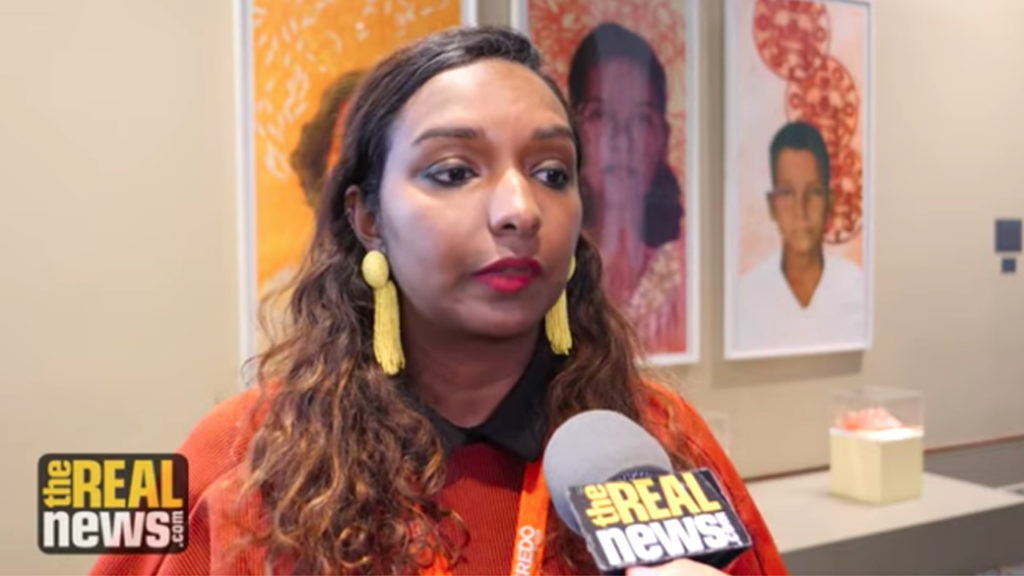 DHARNA NOOR: I’m here at Netroots Nation 2019 in Philadelphia. It bills itself as the largest gathering of progressives every year. And I am here with one of the speakers at this conference. Thanu Yakupitiyage is the Communications Director at 350.org. Thank you for being here.

THANU YAKUPITIYAGE: Thank you for having me.

DHARNA NOOR: So it’s Netroots, so we’re going to be hearing–of course–from a number of candidates. We’re gonna be hearing a bit about their platforms, what they say that they will do as president. What are you looking to hear in terms of what folks are going to do on climate change?

THANU YAKUPITIYAGE: I mean, we’re really looking to hear what their tangible climate action plans are beyond just making promises that the candidates will tackle the climate crisis. We really want to see them home in on their climate plans. Like some of the candidates actually have put out climate plans. And so, we want to hear more than just promises. We want to hear: what are you going to do on day one? What are you going to do within the first hundred days? And we want specific commitments.

THANU YAKUPITIYAGE: Absolutely. I think that the difference, basically, between climate justice and just a climate first plan is that a climate justice plan really is thinking about communities, is thinking about people and the planet. And when we think about the radical economic re-envisioning, we also really need to think about that as a social re-envisioning. We need to think about the ways in which white supremacy, racism, the immigrant rights movement, how it’s all connected to the climate justice movement. When we talk about transforming our economy, the Green New Deal, and making millions of jobs for people in a hundred percent renewable economy, we really also need to be thinking about what does that specifically mean for the most vulnerable communities; for black and brown communities, the communities that are first hit by the climate crisis. Look at the Gulf region right now.

And so, a climate justice plan, it is more than just about emissions. It’s really about how do we transform everything. And also, for us at 350 and 350 Action, it’s about how do we also really phase out the fossil fuel industry? Fossil fuel billionaires, fossil fuel executives, they are at the crux of why we are in this crisis in the first place. The Trump administration is very much in support of the fossil fuel industry and is putting them ahead of any community. And so, we really want to see the candidates really address how they will be phasing out fossil fuels.

THANU YAKUPITIYAGE: So we’ve been asking for all candidates to sign the No New Fossil Fuel Pledge. Most of the candidates have. But beyond just signing a pledge, we want to see them really take fossil fuels out of politics, stop taking money from the fossil fuel industry, and start really getting rid of fossil fuel executives who are in the administration themselves. We really need to see a really direct separation between government and politics and the people–the executives–who have been making this crisis happen. When it comes to Exxon, for example, Exxon knew from the 80s that the result of burning fossil fuels would create a climate crisis. And so, we need for our government and for those who want to be in the highest office in the land to really hold the perpetrators of this accountable. We’re really looking for accountability here.

DHARNA NOOR: Thank you so much.

Thanu Yakupitiyage is the U.S Communications Manager at 350.org. 350.org is an international climate campaign organization that has coordinated over 20,000 climate rallies in more than 180 countries, helped lead the fight against the Keystone XL pipeline, spearheaded the growing fossil fuel divestment campaign, and co-organized the largest climate march in history, the People’s Climate…