For the sixth consecutive week Palestinians in Gaza headed to the Israeli border to demonstrate the "Great March of Return." Israeli soldiers continued their attacks on the protesters, wounding over 160. Special correspondent Noor Harazeen reports from Gaza

For the sixth consecutive week Palestinians in Gaza headed to the Israeli border to demonstrate the "Great March of Return." Israeli soldiers continued their attacks on the protesters, wounding over 160. Special correspondent Noor Harazeen reports from Gaza 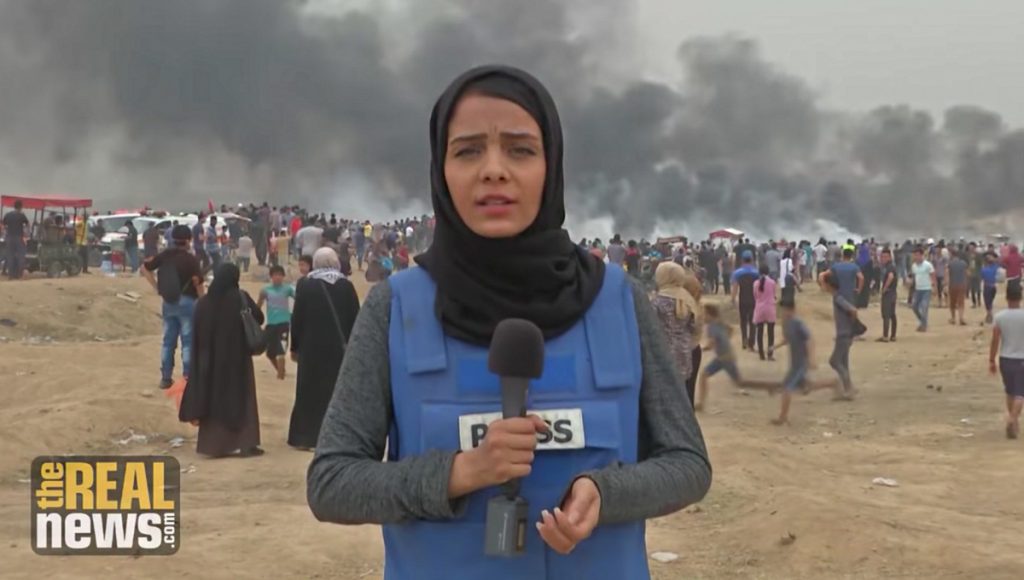 NOOR HARAZEEN: It is the fifth Friday of the Great March of Return protests here in the Gaza Strip. And as you can see behind me, thousands of Palestinians are participating in the protest today, close to the border line between Gaza and Israel. The black smoke you’re seeing behind me is caused by Palestinians. They burned some tires in order to create this black smoke to blind Israeli snipers from attacking and targeting Palestinian protesters. According to the Palestinian medical sources, the number of Palestinians killed in the Gaza strip since the start of the Great March of Return is up to 45 Palestinians, including two journalists, and the number of injuries is up to 6,000 Palestinians.

Israeli troops on Friday wounded more than 160 armless Palestinian protestors with live fire and tear gas bombs near the Gaza border fence with Israel during the sixth week of the Great Return March, health officials in Gaza said. The protestors took to five protest sites along the Gaza border with incendiary kites, burning large amounts of tires to provide protection from Israeli snipers.

ABU ADHAM: We are using slingshots, kits, stones, and burnt tires to protest. And we will continue protesting even if we lose our lives. We want to send a message to the world that this is our land and it’s our right to return back to it.

NOOR HARAZEEN: Organizers called round 6 of the weekly border demonstrations, which began in late March, the Friday of Palestinian Workers, to highlight the plight of workers in the Gaza Strip, where more than 40 percent of its population is unemployed, and suffering deteriorating political, humanitarian, and economic conditions.

ASHRAF SHANAN: Despite wearing a bulletproof vest and a helmet, I don’t feel safe at all. And probably the situation since the beginning of the Great Return marches, I feel more at risk than during the previous three Israeli wars in Gaza. Even for, for my wife and kids, they are terribly afraid about me being in this location, because they know that two journalists from Gaza were killed while covering the news, and dozens more were injured due to Israel’s use of excessive force against the peaceful protesters in Gaza.

NOOR HARAZEEN: Despite the wave of heat hitting Gaza, and time for final term exams, the numbers of protestors remarkably increased after Friday’s prayer. Organizers plan to sustain the momentum the rallies have gained to reach its climax on May 15, to coincide with the 70th anniversary of Catastrophe (Nakba) Day, when more than 700,000 Palestinians in 1948 were expelled from their lands in what is now Israel.