Shir Hever: Israel's proposal to annex more than 10% of the West Bank illustrates its rejection of International Law

Shir Hever: Israel's proposal to annex more than 10% of the West Bank illustrates its rejection of International Law 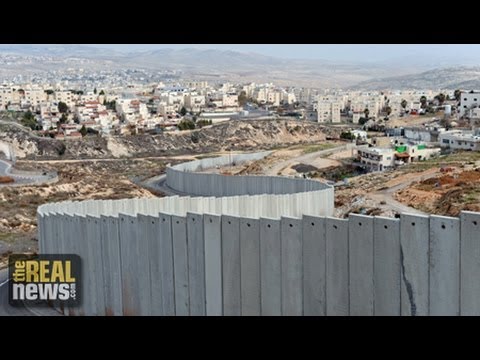 In news from the occupied Palestinian territories, Israeli negotiators are now demanding that Palestinians concede their future state border at the separation wall along the West Bank. Palestinians say this amounts to an illegal landgrab, as the separation wall crosses the internationally recognized 1967 Green Line. Almost 10 percent of the West Bank will remain in the west side of the barrier in Israel when construction of the wall is completed, according to the Israeli human rights group B’Tselem.

Now joining us to discuss this is Shir Hever. He’s an economic researcher at the Alternative Information Center, a Palestinian-Israeli organization active in Jerusalem and Beit Sahour. He’s also the author of The Political Economy of Israel’s Occupation: Repression Beyond Exploitation.

Thanks you so much for joining us, Shir.

SHIR HEVER, ECONOMIST, ALTERNATIVE INFORMATION CENTER: Thank you, Jaisal, for having me.

NOOR: So, Shir, we wanted to get your response to this news. You know, it’s long been suspected that Israel, you know, wants to annex most of the West Bank. But now they’re saying they’re going to take everything west of the barrier wall. So we want to get your response. And also, what’s going to happen to the massive amounts of settlements that are on the other side of the barrier wall?

HEVER: I think we should separate between reality and fiction. And the separation wall is reality, is something that has been built by Israel over the past 13 years. And I’m saying this not because they take a very long time to build a wall, but because they constantly move the wall. The wall is part of a policy used by Israel in order to confiscate Palestinian land, in order to separate between populations. And this is a reality which hundreds of thousands of Palestinians have to deal with every day when the wall prevents them from reaching their schools, reaching hospitals, reaching the workplaces or their lands.

And, in fact, the wall, even though Israel calls it the security barrier officially, in a meeting in which I was present, the brigadier general Yair Golan, the former commander of the Israeli forces in the West Bank, told the people present that in fact the wall [was] not built in order to provide security. It was–his orders that he received from the Israeli government were that the wall’s first purpose is to separate between people, meaning that the wall’s true intention is to prevent Israelis and Palestinians from meeting each other, becoming friends, getting married, and its secondary purpose is to provide security. And that’s one of the reasons also why the wall is moving all the time, because they’re trying to incorporate as many Jews as they can on the Israeli side of the wall, but at the same time trying to exclude [as many] Palestinians as they can on the other side, on the east side of the wall. This is the reality.

But when we talk about negotiations [inaud.] about the demand by the Israeli negotiating team and the current talks with Palestinians, we go into the [inaud] because these negotiations are not really negotiations. There are no two sides here who are able to negotiate give and take. There is one power, which is Israel, which is the occupying power, the sovereign power in the region, and they have control on both sides of what’s happening currently around the wall of separation. They continue to collect taxes on both sides of the wall. So the only reason why the Israeli negotiating team is making this kind of demand is in order to perpetuate the illusion that these are negotiations between two sides.

And the way that Israeli government is trying to sell the negotiations, both to the Israeli public and to the rest of the world, is as if it is some kind of haggling. So they start–the Palestinians have already said there is the internationally recognized border of 1967, which is the border that was established [inaud.] and this should be the international border and the Palestinian state should be created on the other side. And this is–. So Israel said, this is your demand;; we will make a counter demand. We will say the wall of separation should be the border, meaning that we’re going to annex [inaud.] amount of areas and, in fact, turn the Palestinian territory into small enclaves. But the reason I’m calling this fiction is everybody knows that this is not actually going to happen. Everybody knows also that the Palestinian leadership will never accept this, and even that the Israeli government is not really going to follow through and make it as a real offer. They’re not going to allow a Palestinian state, a sovereign Palestinian state, even in those tiny enclaves that will remain after the wall will be considered a border.

So the reason that they’re making this offer is to create the illusion that they’re haggling. But I think it’s very clear that the negotiations will eventually end in failure. I think everybody knows this now. But still the Israeli government is trying to win some time to keep the negotiations [inaud.] a little bit so they can say they’re in the middle of the peace process, they’re trying their best. And this helps them to stave off some international criticism.

NOOR: And in 2004 the International Court of Justice found this wall violated international law. How exactly is Israel able to demand this as–or call for this to be their border, as you say, only as a posture? But talk about why this is even possible.

HEVER: Yeah. We should understand that Israel doesn’t recognize the validity of international law in practice. Officially it does. In fact, right after Israel occupied the Palestinian territory in ’67, they acknowledged that the Fourth Geneva Convention applies to the occupied territory. But they later changed their mind and they decided not to apply abide by international law anymore, especially when it’s not convenient for them. The wall, they say, is built not–originally the wall was designed. They said, this has nothing to do [inaud.] future borders. It has nothing to do with which area is occupied and which isn’t. It’s just about security. But somehow it happened that the walls route goes in such a way that it doesn’t go into Israeli territory for one centimeter. All of the wall’s route is deep inside Palestinian land. So security considerations are only taken into account when it’s at the expense of Palestinians, never when it’s at the expense of Israel.

But now this idea that the wall can be considered an international border is a preposterous idea. But how can Israel make this claim? They can make it, this claim, as long as the United States is willing to continue the charade and to tell the world there are negotiations, that the United States is mediating between two sides as Uif there are indeed two sides. And as long as this charade continues, Israel can say whatever they want. They can make these offers. They know the offers will not be accepted. But if the Palestinian leadership of the Palestinian Authority in Ramallah is going to fall into this trap and make a counter offer and say, well, no, we’re not–we [inaud.] accept the wall of separation as the border, we want to assist on the ’67 borders, then it only prolongs the negotiations. This is what Israel is really after, prolonging them.

HEVER: Thank you, Jaisal, for having me.

NOOR: You can follow us @TheRealNews on Twitter, and you can Tweet me questions, comments, or story ideas @JaisalNoor. Thank you so much for joining us.