In a historic vote, the Senate voted 56-41 to withdraw military forces from the US-Saudi war on Yemen. Yemeni-American community organizer Rabyaah Althaibani, whose family has been divided, says she could not be happier

In a historic vote, the Senate voted 56-41 to withdraw military forces from the US-Saudi war on Yemen. Yemeni-American community organizer Rabyaah Althaibani, whose family has been divided, says she could not be happier 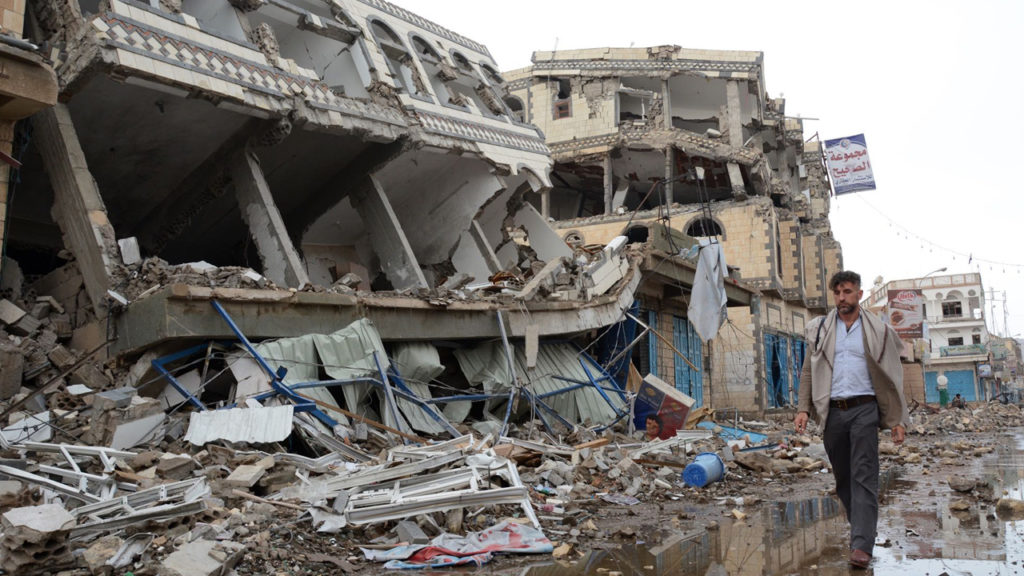 The U.S. Senate has just made history by voting for a bill to end U.S. support for Saudi Arabia and their joint war on Yemen. U.S. Senators voted 56 to 41 in a landslide vote in support of a bill that cites the War Powers Resolution in order to withdraw U.S. military forces from what they determine is an unauthorized and unconstitutional war in Yemen. Senator Bernie Sanders responded to the historic victory after the vote.

BERNIE SANDERS: This is about 85,000 children starving to death; 10,000 new cases of cholera every single week; and the United Nations telling us that Yemen is on the verge of imminent famine, with the possibility of millions of people dying all because of Saudi activities in that civil war. And I think the historical importance of today is not only moving the United States out of that horrific war, but is having the country see that their elected representatives are about to take back their constitutional responsibility on the issues of war; one of the most important functions that the United States Congress has.

BEN NORTON: This historic vote follows years of campaigning by human rights organizations and Yemeni activists, who have been protesting against a nearly four-year war that has unleashed the largest humanitarian catastrophe on earth, leading to well over 100,000 civilian deaths. Well, we are joined by a leading organizer in the Yemeni-American community in New York City, Rabyaah Althaibani, to discuss the importance of this vote. Thanks for joining us, Rabyaah.

BEN NORTON: So can you just please respond to this, this important vote? I mean, I should make it clear that this isn’t necessarily a victory yet. The bill does need to pass the House, although in January it’s very likely that the bill will pass in the House. Can you respond to this historic vote?

RABYAAH ALTHAIBANI: Ben, I thought, most of us thought, this day would never come. That our, you know, my government would do the right thing. But we are beyond ecstatic. I am–yes, the fight, wwe haven’t won completely yet, especially since yesterday, as you know, the House–Paul Ryan, you know, pulled that dirty trick. But we are very optimistic in regards to what may happen in January. But it’s–I mean, this morning we heard that there was real progress, with both parties meeting, and in Switzerland. And then to have this right now, it’s just, it’s just, I don’t have the words to describe to you how happy and relieved and just so full of hope that we all are feeling right now.

BEN NORTON: And the war has really affected you personally. Can you talk about how it’s divided your family, and the families of many Yemeni Americans?

RABYAAH ALTHAIBANI: Oh yes, definitely. This war not only impacts the folks, you know, that are on the ground; the millions of people–I mean, the people that are fighting. But I’m talking about millions and millions of people that are, that there’s a threat of starvation. A lot of folks–I have a lot of family in Yemen, by the way. And they are all suffering. And if it wasn’t–they are very lucky they have family members outside of Yemen.

So I mean, the conflict in Yemen, it’s not sort of a black and white conflict. It’s not. It’s really complicated. And you do have many different factions fighting. In my own family, I have family members that are pro-Saudi intervention, and family members that are anti-Saudi intervention. I had cousins fighting in, you know, with different camps. So it’s definitely created a divide within families, a divide in the entire Yemeni community. If you’re talking about folks here in the United States or New York City, you know, right after the Arab Spring, everybody came together. There was so much unity. And then everything just sort of went downhill from there. And when this war began and the Houthis came into Sana’a in September 2014, and then when the Saudi intervention, when they intervened in March 20, 2015, this all just sort of really created major divides within the Yemeni Americans and Yemenis in Yemen, as well.

BEN NORTON: And you’ve written for media outlets about how it’s personally affected you and your family, and divided you from your husband. So can you talk about the personal effects of the U.S.-Saudi war on your own family?

RABYAAH ALTHAIBANI: So you know, it was already hard enough, you know, having family members and loved ones in Yemen during the war. On top of that, a lot of Yemeni Americans, as you know, here in the U.S. are American citizens. A lot of them have petitions. After the war began about a year or so ago, a lot of folks started petitioning for their family members to come to the U.S., because it was becoming more and more unsafe for them to remain in Yemen. And one of those, you know, my husband was one–you know, he was a journalist that had to escape Yemen, because it was too dangerous for him to stay in Yemen. And then, you know, Trump became president, and then you had the Muslim ban.

And so there was total, sort of, shut down of anyone coming into the U.S. And so you have Yemenis that are stranded throughout the world because there is no embassy in Yemen anymore, and they can’t come into the U.S. And these are, you know, family members of American citizens. And so my husband was banned for about a year and a half. He was in India for a year, and about another, almost a year, in Malaysia while we were fighting this xenophobic policy. And we finally got the State Department to issue a waive of the ban, but there is still–I sort of have, like, survivor’s guilt. There are thousands and thousands of folks that are in the Yemeni community that are divided, and separated from their loved ones, and can’t bring them back in. So it’s been very, very difficult for everybody.

BEN NORTON: How does it feel to have your community and your family divided by the U.S. government, when at the same time the U.S. government is complicit in this war that Yemenis are fleeing? And just for context for viewers, the United States has supported the Saudi intervention in Yemen since March 2015. It’s widely recognized that Saudi Arabia and the United Arab Emirates could not wage this war without U.S. support, which is why this vote by the Senate is so important. And the U.S. has sold more than $100 billion of weapons to Saudi Arabia; it’s providing targeting assistance and refueling efforts for Saudi Arabia as it bombs these communities of Yemenis who are then trying to flee, and they can’t even seek refuge in this country. How does that feel?

RABYAAH ALTHAIBANI: It’s really difficult to–it’s frustrating, and very difficult to sort of, like, describe to you how much harder U.S. intervention has made this conflict, or complicated it. I truly believe that the U.S. could have played a partial role in getting these groups together. I definitely from the very beginning was anti-Saudi intervention. I was also against Houthi militia taking over the capital. I’m not for militia rule. We are a republic. However, you know, with the American intervention, and them sort of fueling this war and helping the coalition it was impossible to think that these two sides are going to come to the table and have a diplomatic solution.

So the U.S. cannot be an impartial third party to this conflict if they are part of the conflict themselves. And thank God right now we finally had this vote today where all U.S. support for this war will be stopped. And hopefully the U.S. can play a real positive role in getting in and ending this conflict. And it’s not, it’s not going to be easy, but it’s–this is a really great step for what I’m hoping to come in the future for Yemen.

BEN NORTON: We will see in January, when the new House enters and they vote, likely, to pass that legislation. We were joined by the Yemeni American community organizer Rabyaah Althaibani. Thanks so much for joining us.

RABYAAH ALTHAIBANI: Thank you for having me, Ben. Thank you.