Sen. Lindsey Graham issued one of the most explicit threats of military intervention against Venezuela yet. But does he mean it and does he truly believe Venezuela is a threat to the United States or is he just trying to scare the Maduro government? We discuss the latest escalation with CEPR's Alex Main

Sen. Lindsey Graham issued one of the most explicit threats of military intervention against Venezuela yet. But does he mean it and does he truly believe Venezuela is a threat to the United States or is he just trying to scare the Maduro government? We discuss the latest escalation with CEPR's Alex Main 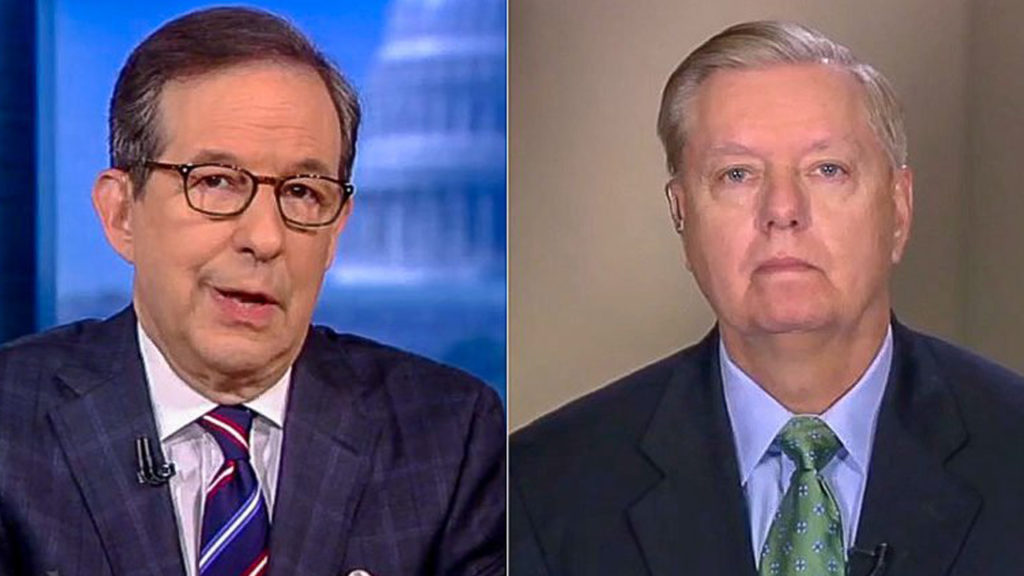 LINDSEY GRAHAM: I would give Cuba an ultimatum to get out of Venezuela. If they don’t, I would let the Venezuelan military know you’ve got to choose between democracy and Maduro. And if you choose Maduro and Cuba, we’re coming after you.

What you just heard was Republican Senator Lindsey Graham on FOX News Sunday. Graham was answering a question from Chris Wallace, who talked to Graham about an article that Graham had published in The Wall Street Journal last week in which he argued that the Trump administration ought to invade Venezuela, just as President Ronald Reagan invaded the island nation of Grenada in 1983 in order to oust a Marxist government there. Here’s what Wallace and Graham said in full.

CHRIS WALLACE: You had a tough article in the Wall Street Journal this week, and you even talk about the US invading Venezuela like Ronald Reagan invaded Grenada. Really?

LINDSEY GRAHAM: Yeah, really. So, here’s the deal. I would do it exactly what Reagan did. This is in our backyard. Trump said that he was for democracy, against socialism. And he’s drawn a red line when it comes to Maduro. If he doesn’t act, everybody in the world is gonna think he’s weak. If he does act, it helps us for North Korea, Iran, Russia, and everybody else.

GREG WILPERT: Joining me now to discuss these latest efforts to escalate tensions between the US and Venezuela is Alex Main. Alex is a senior associate for international policy at the Center for Economic and Policy Research, where he focuses on US foreign policy and Latin America and the Caribbean. Thanks for joining us again, Alex.

GREG WILPERT: So there’s a lot we can unpack here. So let’s start with the comparison between Reagan’s 1983 invasion of Grenada and the situation in Venezuela today. What are your thoughts on this parallel?

ALEX MAIN: Well, first of all, it’s an absurd comparison. Grenada is a tiny island nation. I think the population is less than a 100,000. At the time that it was invaded, the absolutely minute armed force forces of Grenada, that were divided at the time, represented absolutely no threat, and as such actually posed no resistance at all to the US invasion. And of course, Venezuela is a much bigger country of just under 30 million. It has a standing army of about half a million. And so it would be obviously a much, much more–you know, it would take a lot more resources from the US to invade. And it would be a lot more complicated than it would be for Grenada.

So the comparison is absurd, although, you know, the pretext is oddly similar that’s been given in both cases; the pretext being a supposed presence of Cuban agents that, you know, exercise sort of direct control in the nation and pose some sort of security threat to the United States.

GREG WILPERT: Now, a common argument that Graham and others have made who favor US intervention in Venezuela, from Venezuela envoy Elliott Abrams, to National Security Adviser John Bolton, to Secretary of State Mike Pompeo, that they all make is that Venezuela is being propped up by Cuba’s military. Now, is there any evidence for this? And if not, why do they keep insisting on making this claim?

ALEX MAIN: Well, no, there is absolutely no evidence. I mean, of course it’s known that there are Cubans in Venezuela; primarily for a doctors program. You’ve had thousands of Cuban doctors that have been in poor neighborhoods in rural areas of Venezuela for years now. That’s been really the brunt of the Cuban presence in Venezuela. There’s no evidence that they exercise any kind of real influence or control within Venezuela’s security apparatus, or even its intelligence apparatus, as is often accused, let alone that Cuba is somehow calling the shots in terms of Maduro’s strategy vis a vis the rest of the world.

And you know, what we have heard is you’ve had sectors of the intelligence community actually, I think, frustrated with this narrative, that have leaked to the media, including the New York Times, their enormous skepticism with regard to these claims of Cuban control within Venezuela. So there’s certainly not consensus within the US government. And no, there’s absolutely no evidence. But this is now a very hard narrative within, sort of, the Trump administration, among the officials that are driving Venezuela policy, and certainly among a lot of Republicans on Capitol Hill, as well. They are seeing Venezuela through the sort of ‘Cuba’ lens. It really harkens back to the Cold War.

GREG WILPERT: So do you think this is basically the idea that somehow Cuba is going to take over Latin America and turn it all communist? Is that what they’re trying to project?

ALEX MAIN: Well, there’s that, and there’s the idea that, you know, Cuba has, you know, very sinister objectives and wants to harm the United States, wants to undermine US security. And of course there’s been no real evidence of that since the early 1960s, when there was the, of course, the missile crisis involving the Soviet Union. There is no Soviet Union today. There are no nuclear missiles anywhere in Latin America. So it seems like a very very far fetched claim. And I think it’s directed, I think, at a very, very small but still apparently powerful audience in the south of Florida that seems to still exercise a lot of influence over the politics of this country, and particularly within the Republican Party.

GREG WILPERT: Senator Graham refers to the old Monroe Doctrine idea that Latin America is in the US backyard, and that it’s thus in the national security interest of the US to intervene. Now, national security is, of course, an old story with which the US justifies all of its interventions all around the world. But what’s your sense of Congress at the moment? How many Republicans and how many Democrats buy this national security argument with regard to Venezuela at the moment, and what’s your sense of the mood in Congress with regard to initiating a more violent form of intervention in Venezuela, aside from the already crushing economic sanctions that the US has imposed?

ALEX MAIN: Well, I don’t actually think that that mood genuinely exists. I think what we’re seeing is more of this sort of saber rattling that we saw first from Senator Marco Rubio many months ago, and, you know, that has also been expressed by members of the Trump administration; particularly Secretary of State Pompeo, who about a week and a half ago was making very open threats of military intervention. But you know, when you dig a little bit and you get to sort of the off the record comments that are often published in, you know, US news articles and so on, you get another sense, which is that, you know, they are desperate to put pressure on the Venezuelan armed forces, on the Venezuelan government as well, to sort of, to sort of give in to their demands. And primarily for, of course, Maduro, President Maduro to resign, for him to be replaced by Guaido, and to go to elections, and so on.

And they’ve, you know, tried all sorts of methods. Of course, they’ve increased economic sanctions that are doing a tremendous amount of damage in Venezuela. And I think they believe that threats of military intervention will also, you know, serve to put the necessary pressure on certainly the armed forces of Venezuela. l don’t think that’s the case. But it’s a method that they have been employing.

You know, I think even Senator Graham doesn’t really believe what he’s saying. And you know, I base that on the fact that, you know, sometime last year he related himself that he’d had a conversation with President Trump in which Trump had apparently asked him about military invasion of Venezuela. And he rejected that as sort of a crazy idea, even while recognizing that he was generally sort of favorable to U.S. military intervention in all sorts of other cases.

So I think this is more a tactic that isn’t working to put, you know, additional pressure on Venezuela. The problem is is that it does harden a narrative of military intervention. I think it kind of opens the door to that. And you know, it’s quite possible that further down the road it will sort of help create a context by which a genuine U.S. military intervention can occur.

GREG WILPERT: Well it’s certainly a very worrisome. But we’ll continue to keep an eye on this and follow up later. I’m speaking to Alex Main, senior associate for International Policy at the Center for Economic and Policy Research. Thanks again, Alex, for having joined us today.