Why Climate Deniers Are Plain Wrong 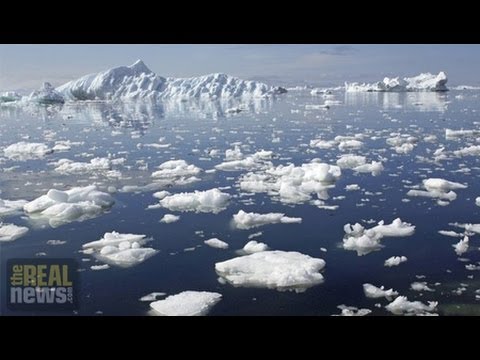 We’re continuing our coverage on the major UN report outlining the human linkage to climate change and the dire threats it poses on the future of the human race.

We’re continuing our conversation with Subhankar Banerjee. He’s an environmental humanities scholar and activist. He founded ClimateStorytellers.org. And his new piece just out is titled “Destabilization of Arctic Sea Ice Would Be Game Over for Climate”.

Thank you so much for joining us again, Subhankar.

NOOR: So, Subhankar, in your new article, you take on these climate skeptics that we touched upon in the first part of this interview. What are their arguments? And what facts do you use to thwart what they’re saying?

So here is the deal. Every year about mid September, the National Snow and Ice Data Center releases one of the most important climate data, which is the extent of the summer sea ice in the Arctic Ocean. And this year it shows that the summer sea ice extent is sixth lowest since the recorded time they have been doing, since 1978.

But the climate skeptics picked up on the fact–or climate deniers picked up on the fact that the extent of sea ice has gone up from last year. Two thousand twelve was the lowest ever recorded, which was about 1.31 million square miles. So this year it has gone up to 1.97. So that was reported by David Rose, first in U.K.’s Mail On Sunday, saying that climate global warming has stopped, it’s cooling, and also The Telegraph in the U.K. And that was then picked up by Fox News. And they said that global warming, yes, it’s finally dead.

So what they did is that–this is called incredibly irresponsible disinformation, because what we need to look at again is the long-term trend of the Arctic sea ice, which the scientists are saying is on a rapidly declining path. And even this year’s summer sea ice, as I said, is sixth lowest, and it’s 24 percent less than the 1979-2000 average. That’s all the data we have. So it is on a declining trend. But we are seeing a local minima this year. So it’s very easy to debunk these climate zombies that Dr. Alley calls them.

NOOR: And in this new UN report, it does outline the dangers and the threats with the melting Arctic sea ice. That’s something you have documented, including in your upcoming book Arctic Voices: Resistance at the Tipping Point. Lay out the threat and the dangers that we face as these glaciers continue to melt.

BANERJEE: Absolutely. There are three very well connected issues that are very dangerous. One is that when the Arctic sea ice, the white, large surface that reflects solar radiation, is replaced by dark water, it absorbs solar radiation. And that immediately has essentially three effects. It increases the melting of the Greenland ice sheet, which the UN report has documented is melting at an unprecedented rate. It increases the thawing of permafrost on land. That then releases methane, which is 72 times more potent as a greenhouse gas than CO2 over a 20-year period. And it destabilizes the subsea permafrost. That then releases huge quantities of methane. An enormous methane release could potentially destabilize the entire Earth’s climate system to a point where we could potentially even reach for something like what happened 250 million years ago, called the end Permian extinction, that wiped out more than 90 percent life on Earth.

We are not there yet. But the paying attention to the Arctic sea ice, the Greenland ice sheet, and the Arctic methane are very important, all of which are discussed in the UN current report.

NOOR: Subhankar Banerjee, thank you so much for joining us.

BANERJEE: Thank you, Jaisal, for having me again.

Subhankar Banerjee is a photographer, writer, and activist. Over the past decade he has worked tirelessly for the conservation of ecoculturally significant areas of the Arctic, and to raise awareness about indigenous human rights and climate change. He founded ClimateStoryTellers.org, and is editor of the anthology Arctic Voices: Resistance at the Tipping Point which will be published…