Western media like to present Alexei Navalny as Russia's main opposition leader, because his actions have sparked the recent protest wave, but he hardly represents anyone, says Aleksandr Buzgalin. Rather, the protests express opposition to the Russian system

Western media like to present Alexei Navalny as Russia's main opposition leader, because his actions have sparked the recent protest wave, but he hardly represents anyone, says Aleksandr Buzgalin. Rather, the protests express opposition to the Russian system 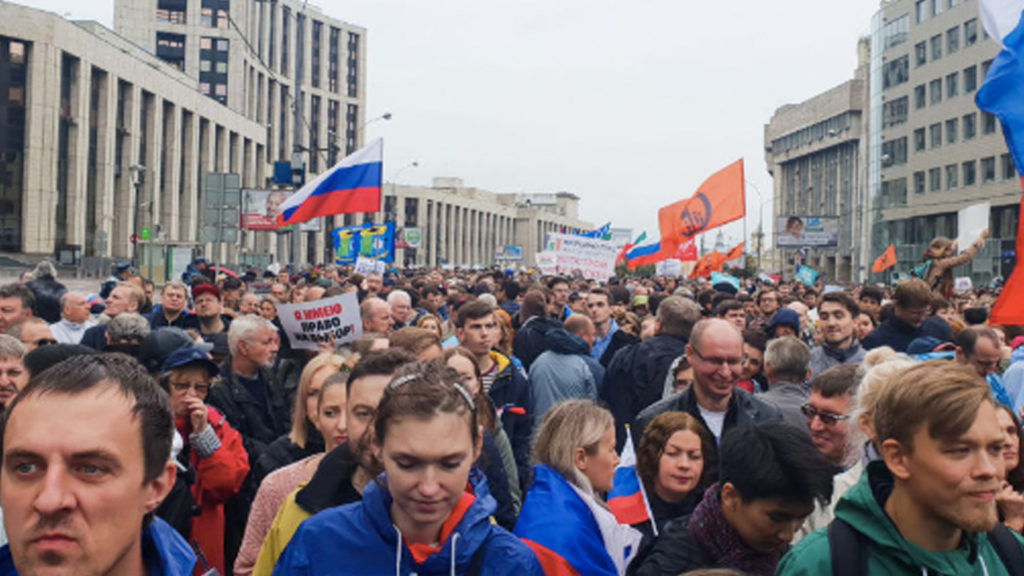 Last weekend, in one of the largest opposition protests of the past month, an estimated 50,000 to 60,000 Russians took to the streets in Moscow against the government of President Vladimir Putin. The most recent protest got additional attention because of a police officer’s punching of a woman protester in the stomach, whereby the video of the act went viral. On Monday, the Interior Ministry even announced that it would launch an investigation into the incident.

These protests, which have been going on for nearly a month now, have led to the temporary arrest of over 1,000 demonstrators last July, including Russia’s main opposition leader, Alexander Navalny. The protests were sparked when many opposition candidates were prevented from registering for a local Moscow legislative election. According to electoral authorities, they did not collect enough signatures. At first, the protests were repressed because they did not have proper authorization. Last weekend’s protest, though, was authorized.

Joining me now to discuss the new protest movement against Russia’s President, Putin, is Aleksandr Buzgalin. Alexander is Professor of Political Economy at Moscow State University, and he is also the editor of the independent democratic left magazine, Alternatives. Thanks for joining us again, Aleksandr.

ALEKSANDR BUZGALIN: I’m very glad to discuss this very important question. Thank you for opportunity to be with you.

GREG WILPERT: Yes. So considering that Moscow has a population of about 12 million, 50,000 protesters does not seem like all that much. Or is it? What do you make of this? And is there a major new protest movement brewing against President Putin, or is this something that you think might die down very soon?

ALEKSANDR BUZGALIN: So first of all, 50,000 of course is not a very big organization, or not very big demonstration really for such a big city as Moscow. But in Russia, we didn’t have for many years big protest actions. And this is the biggest after 2012. What is important: this is not a protest against President Putin, and when you said about this, this is more a Western estimation and more an estimation of commentators. Really, people came to say that the system of organization of elections, system of political power, freedom of press, all these aspects of social and political life are under the control of bureaucracy. And the people, they disagree with this.

But also it is important to stress that Navalny is not the main leader of opposition. We have very different types of opposition. And during these rallies, during these meetings in July in Moscow, we had mainly people who came to listen to rock music and to say, “Yes for more democracy.” This is not left opposition or social opposition. Navalny is also more scandal leader than a real leader of opposition. And majority of Russian citizens have no respect to this person and know that he is not really the representative of ordinary citizens, ordinary workers, ordinary intelligentsia, and so on. So these demonstrations, these actions, were mainly action of more or less liberal, in let’s say good sense and bad sense in the same time of this word.

What is important: August 17, we are expecting another demonstration, another rally, and it will be organized by the Communist Party of Russian Federation together with other democratic and left organizations. It is very unusual when the Communist Party of Russian Federation are making something together with another type of opposition, I can say liberal opposition. And the elections in Moscow City Parliament is not only a formal prerequisite, but one of the real reasons people want to have at least real democratic collections. Also, it’s necessary to understand that such big attention to these demonstrations from the West is interconnected with, as I said, liberal leaders of this protest. Ordinary people are not liberals. They are very different, and they want to have more democracy, more justice, more freedom of speech, more glasnost, if I can say in old world words. But it is represented as really the only opposition. It’s not the case.

GREG WILPERT: Your point about Navalny, I think, is very well taken and very important. I mean, he’s presented in Western media as being the leader and as being the main figure. But of course, when you look at the opinion polls, one can see that he rarely has more than 10 percent of support. But still, given the focus on Navalny, I just want to look at him just very briefly. I mean, what kind of political tendency or politics does he actually espouse? And what parts of society does he even represent?

ALEKSANDR BUZGALIN: So first of all, I will disagree that 10 percent of Russians support Navalny. I don’t know what kind of opinion polls you made quotation, but for majority of Russians who are not living in Moscow, for ordinary Russians, Navalny is just scandal person, and not a real leader of opposition. He is more well-known among journalists; so-called elite intelligentsia, if I can say so; some representatives of a so-called creative class, but I don’t like this word and this content; people who are making business in the show sphere, in real business, in real estate, in finance; bureaucrats from corporations; relatively young people; some elite students from elite universities.

So this is not real Russia, and not of course periphery of Russia. And his position is very different. He was sometimes a nationalist and was speaking against immigration. He can say a lot against corruption, but he will never say real important thoughts about the necessity to have growth of incomes of ordinary Russians, to decrease inequality. Because this is the key question for the modern Russian situation: to make a more regulated economy, to nationalize key spheres where they have profit for private business; fuel, gas, oil, these spheres of economy. He is more demagogue, demagoguery, I don’t-

ALEKSANDR BUZGALIN: Demagogue, yeah. And populist. In many aspects, he is populist. And I’m afraid that he can be also right-wing populist. Now he is not such type of person, but he is moving from one aspect to another aspect very quickly. He was with nationalists some years ago, now he is not. What he will be tomorrow, nobody knows. He doesn’t have an exact political position. But definitely I can say that he is not left, and I have very big doubts that he’s a real democrat.

GREG WILPERT: Right. Actually, and I didn’t mean to say that he necessarily has 10 percent. I saw some estimates that reached almost 10 percent. But anyway, leaving that aside, I want to look at Vladimir Putin. I mean, he was re-elected last year with a very solid margin of 76%. But recent opinion polls in his case seem to indicate that his popularity has been gradually declining; but still very high, over 60%. What is the cause of his decline in popularity, would you say? And do you think that Putin is maybe cracking down on this opposition because of this decline, or would you say that’s a mischaracterization of what’s happening?

ALEKSANDR BUZGALIN: So first of all, key question is not president as personality. It is not a problem of Putin, it is a problem of a social economic system which we have in Russia, a political system which we have in Russia. And this system really created stagnation in all spheres of life and created a very dusty atmosphere in culture, and ideology. And the majority of people are against this system. But the problem is Putin is playing the role of good czar, good king. And there are a lot of critique about Minister of Economy, Minister of Finance, Prime Minister, everybody, but not President.

And it was protested by the way, similar with protest today. But it was no big reaction in the West because it was not interesting to say that in Russia we have left opposition, people who are fighting against anti-social course of president, of government, and so on. This is the typical reaction of mainstream mass media. I’m not talking about Real News, you are making a great job. But the mainstream mass media, typically they’ll show even everything when there are liberal leaders, and nearly nothing when there are left leaders. Let’s see what will be on August 17 when the Communist Party of Russian Federation will try to organize a demonstration.

GREG WILPERT: Yes. I think that’s a good point to end this, because we’ll definitely continue to look at this and see what happens on August 16. But we’ll leave it here for now. I was speaking to Alexander Buzgalin, Professor of Political Economy at Moscow State University. Thanks again, Aleksandr, for having joined us today.

ALEKSANDR BUZGALIN: Yeah. Thank you very much. It was big pleasure and honor for me to be with you. Thank you. Goodbye.

GREG WILPERT: Great. And thank you for joining The Real News Network.