Roger Waters: Neoliberalism Is Fueling the Flames of Fascism (Pt 1/2)

After performing in Brazil, Roger Waters discusses the rise of Jair Bolsonaro and the Murder of Marielle Franco

After performing in Brazil, Roger Waters discusses the rise of Jair Bolsonaro and the Murder of Marielle Franco

vRoger Waters: Neoliberalism Is Fueling the Flames of Fascism 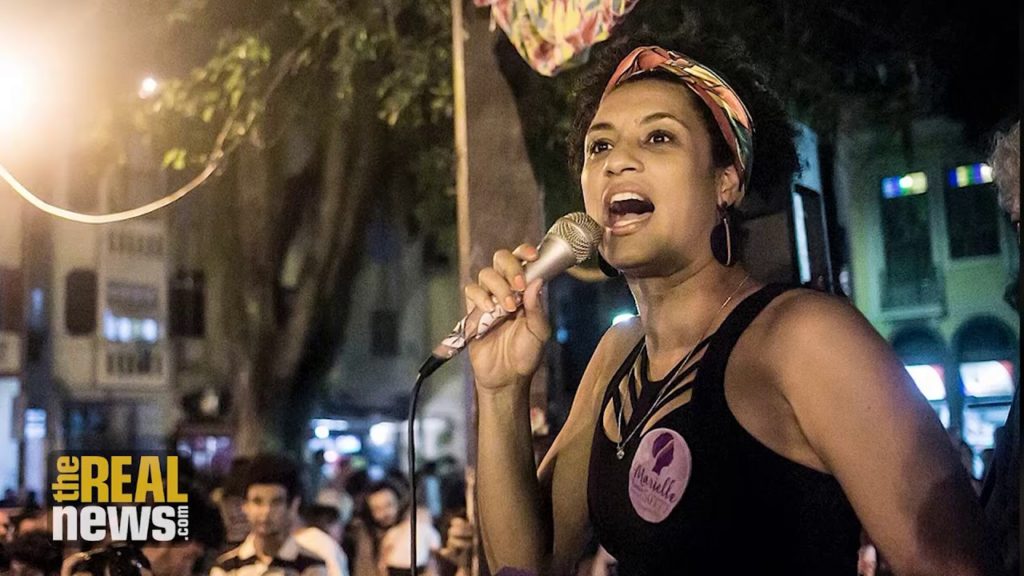 Legendary musician and human rights activist Roger Waters just completed a tour of South America at a point in time at which the continent is experiencing massive political upheaval. From Argentina, to Brazil, to Ecuador, progressive governments have been supplanted by governments that either lean to the right or are unabashedly situated on the far right of the political spectrum. During his tour, Roger met with many South Americans who were on the front line of the battle to protect and advance the social justice and environmental victories of the last 20 years.

Now here to discuss with us what he heard and saw on this historic tour is Roger Waters himself. Roger is an English songwriter, a singer, bassist, and composer. In 1965 he cofounded the progressive rock band Pink Floyd. Roger joins us today from Mexico City. Roger, thank you so much for coming back on The Real News.

ROGER WATERS: I’m very happy. The reason I’m smiling is partly because it’s good to see you again, although I can’t on my laptop, and it’s partly because your pronounciation of bassist. You said ‘bass-ist,’ and I thought you said Baptist. That’s why I’m smiling.

DIMITRI LASCARIS: It was unintentional, Roger. My apologies.

I’d like to start with your trip in Brazil. You performed in Rio de Janeiro days before the presidential election won by Jair Bolsonaro. Bolsonaro, as I’m sure you know, is a brazenly misogynistic and anti-environment candidate who has openly supported the military dictatorship in Brazil. And generally, what was the mood of the people you met while you were in Brazil, and what’s your sense of why Bolsonaro ultimately succeeded in winning the election despite his rather appalling record?

ROGER WATERS: OK. Well, I can’t generalize about the response from the people in Brazil. I don’t go down the pub and chat to the locals, because I don’t speak Spanish, so it would be entirely redundant. I did spend some time with Glenn Greenwald, and so I was able to get a kind of local perspective on the things that were going on. I also spoke with Caetano Veloso, who is a Brazilian singer, songwriter, and so on. And what I noticed was that when I did my very first gig, which was in Sao Paolo, we put the hashtag #elenao, which means ‘not him,’ up on the screen, and fistfights broke out in the audience. And there were fights outside as well, in the carpark.

So this is a deeply divided electorate. So that’s one thing. And I was then, the promoters then told me that I couldn’t continue down that path, because if I caused riots the local judiciary would either put me in prison or I would be sued, and so on and so forth.

However, what causes that? Obviously you’re in a place like that, you think, what? Why is this happening? Well, I have learned a little bit–well, I knew a little bit about Brazilian politics. What has happened is that this is the result of neoliberal economics. This is what the Chicago School, Friedman and the others, funneled through Ronald Reagan and Margaret Thatcher and others, and convinced people like Bill Clinton and others that this was the way to go and that these economic policies would solve all the world’s problems. That if we deregulated everything and allowed the very wealthy to get even wealthier, that trickledown would happen. And that everybody who wasn’t very, very wealthy would become content. All right? What a crock of shit.

And now we’ve seen that. And I believe that that is at the root of almost all social discontent all over the world. And that is why we’re seeing the rise of neofascism in Hungary and other places in Europe. And even Le Pen being in the final round of the presidential elections in the Republic of France, and Donald Trump being elected as the president of the United States of America. It’s all down to the same causes, which is that the working classes are entirely discontent. And quite rightly, because they’ve got nothing, and Steve Schwarzman and a few others, and the Koch brothers, have got everything. And they recognize that it’s not right. What they don’t recognize is that electing a self-declared fascist believer in military dictatorship like Bolsonaro will not improve their lot one hair. In fact, it will do exactly the opposite, because Bolsonaro will do everything that he can to continue deregulating anything. Suggested that they might just bulldoze the Amazon rainforest. And then that’s–that’s the end of all life on earth, very, very quickly. So it’s a terrible problem.

DIMITRI LASCARIS: In March of this year. Marielle Franco, a Brazilian politician, feminist, and human rights activist, was assassinated in Rio de Janeiro. And doing during your tour in Brazil, the Intercept published an article by Glenn Greenwald, whom you mentioned, in which he revealed that you were so moved by the article he’d written about Ms. Franco that you cut that article out of the paper with scissors, folded it up, put in your wallet, and carried it around with you for days. What was it about the story of Marielle Franco that moved you to do that?

ROGER WATERS: I didn’t carry it around for days. I carried around from March, when she was murdered by the Brazilian police. I carried it around from that moment, until I met with Glenn, and said, would you mind if I read this out when we do the gig in Rio de Janeiro? And he said, of course I wouldn’t mind. You know, they were very close friends. But also, Marielle Franco is, was, even after she was killed, fundamentally important to potential human and social and political progress in Brazil, which is a huge and wonderful country. And in fact, there were some other people I mentioned in the concert at Rio, and they’re called the Seeds of Marielle. There are four other black women from the favelas who have now been elected either as councilman or councilwomen in Rio de Janeiro, or to some of the legislative bodies, state bodies.

So Marielle will–I’m getting emotional now, because she was such a great woman. But she will never be forgotten. And those women, and the rest of us who care about human rights for everybody–Bolsonaro doesn’t, by the way. Bolsonaro has publicly stated that the indigenous people of Brazil–so we’re talking about Indians and people in the rainforest–will never own a single centimetre of land, ever. I mean, he’s entirely clear about that. This guy is a genuine monster. Anyway, we got off the subject of Marielle. But it was a very, very moving night for everybody who was at that concert in Rio de Janeiro. And it will remain with me forever.

DIMITRI LASCARIS: Let’s talk about some other women in South America who’ve suffered greatly as a result of human rights violations. And here I want to talk to you about your visit to Argentina. While you were there, and as reported by MercoPress, you met with a group of women known as the Malvinas mothers. Could you tell us about this group, and why you met with them?

ROGER WATERS: Yeah. A number of years ago–I don’t remember exactly how many. Six, seven, eight. I have no idea. But I got an email from an Argentine journalist called Gabrielle Cociffi saying that on behalf of the madres de Malvinas she was trying to organize the identification of 122 dead Argentine soldiers who are interred in Darwin Cemetery in East Falklands. Because they know that the boys were there because the British Army who buried them have the records of which Argentine soldiers, but they don’t know which grave they’re in. And this is a cause of huge heartache and concern to the families of these boys.

And so she asked if I would help. So I immediately replied to her, and said, of course I will. And I did. We managed to get a meeting with Kirchner, who was the president of Argentina at the time, and took some mothers to the presidential palace, and she promised to put her weight behind it, and one thing led to another. And eventually I wrote a letter to–I started writing to Whitehall in England, because I thought they would be the ones who could allow a forensic team in. Because they wouldn’t allow a forensic team in to the Falklands, a Red Cross team, an international Red Cross team to try and identify these boys by DNA method. So I wrote to them and called Sharon Halford eventually, because Whitehall said it’s nothing to do with us, it’s to do with the islanders.

So I wrote a letter to her to try and persuade her. I never heard back, but we think the letter maybe had some effect. It talked about my father and my grandfather, both killed in war, and … Anyway. I can tell you now, here now–and I will get emotional–that of the hundred and … Must be 124. Anyway, we found, identified, 102 of them. I’ve got my figures wrong, because I know there are only 18 of those boys left unidentified.

DIMITRI LASCARIS: That concludes the first part of our discussion with musician and human rights activist Roger Waters. In the second part we will explore Roger’s recent trip to Ecuador, as well as the new Ecuadorian government’s controversial treatment of Julian Assange, the cofounder of WikiLeaks.

And before we sign off, I’d like to remind you, our viewers, that we’ve started a winter fundraiser and need your help to reach our goal of raising $400,000. Every dollar that you donate will be matched. Unlike practically all other news outlets, we do not accept support from governments or corporations. You, our viewers, are the ones who enable us to be free of corporate and government influence and to deliver a truly independent news. Please do what you can to support The Real News today.

This is Dimitri Lascaris reporting from Montreal, Canada.