Mr. Moses says mass incarceration helped build the American steel industry, and while there has been progress, there is still slavery by another name

Mr. Moses says mass incarceration helped build the American steel industry, and while there has been progress, there is still slavery by another name 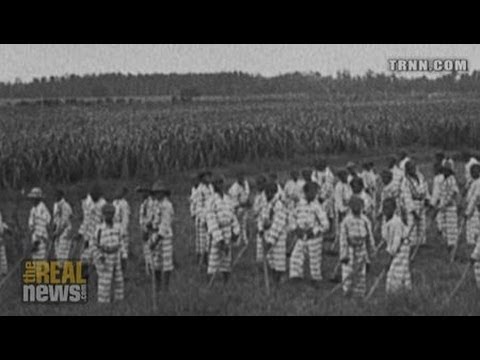 PAUL JAY, SENIOR EDITOR, TRNN: Welcome back to The Real News Network. I’m Paul Jay in Baltimore. And welcome back to Reality Asserts Itself.

Now, if you’ve been following this series of interviews with Bob Moses, you’ll know at the end of the last episode or last segment I said Bob has to get to the airport, so we’re going to kind of stop our chronological movement through Bob’s personal history–and his personal history is so much the history of the 1960s civil rights movement, that as well. But we’re going to jump ahead now and kind of have a more overall thematic conversation. But Bob’s promised to come back, and we’re going to pick up the story from 1964 on in detail.

But, for now, joining us again in the studio is Bob Moses.

Thanks for joining us again, Bob.

JAY: So, one more time, Bob’s an educator, a civil rights activist. During 1960s he was a field secretary for SNCC. He was one of the main organizers of the Mississippi Freedom Summer project. He was a very outspoken critic of the Vietnam War.

And thanks for joining us again.

And I should add you’re the founder of the Algebra Project, which, when you come back, we’ll talk more about.

JAY: But I want to talk kind of much more broadly. From the early 1960s was a real awakening of African-American struggle, and the rise of a mass civil rights movement [incompr.] almost dominating–I don’t know if–dominating may be overstating it, but a very enormous piece of the American discourse that broke through mass media. It broke through mainstream politics. When you look at the movement now, it’s nowhere near that proportion. Of course there’s organizing going on at grassroots level all over the country, but nothing nearly the scale.

Now, I guess some of–not I guess–some of the most overt forms of systemic racism have been modified–you know, the back of the bus, not being able to go into restaurants, and such. And I wouldn’t diminish those things, if you’re living that life, that those are achievements and they’re important achievements. But I don’t need to tell you how many–the proportion of African Americans that are incarcerated, the chronic urban poverty, and so on. Yet given how serious the problems still are, nowhere near the level of movement to try to change the world. And in the last interview I said, why did you risk your life? And you said because you had to. In a sense, you had to live a life with that kind of meaning, you had to do the most meaningful thing, and that you had to be where you were, including sacrificing your own life if that is what it took. So where’s the movement now, and what happened to that?

MOSES: Yeah. So I’d like us to back up and look at this from the point of view of the evolution of the country. And one of the things that when I got back into the country–you know, I was out of the country for ten years and got back into thinking about this issue that you’ve raised–I began thinking that I needed a story in my head about the country, right? How did we get to where we are, right?

And so I’ve been doing of lot of thinking and reading about the history of the country. And what I’ve come to think of is that the country–we’re a country that lurches forward and back, roughly in what I think of as three-quarters of a century units of time. Right?

So there’s a first unit of time, which you might say runs from 1787 and the Constitutional Convention down into the 1860s, right? And in that unit of time, we tried to balance out two really antagonistic and contradictory notions in our Constitution. So during this period of time, we have in our constitution the preamble, which actually says we are a people that are a constitutional people, right? And then we have Article IV, Section 2, paragraph three, which talks about the constitutional property, right, that is the property that might decide that it’s going to own itself and run away, right, from constitutional people that own it, right? And so we have these two very different notions operating in our constitution. You know, Jefferson says in one of his letters (this is around 1820), “we have the wolf by the ear,” and we can neither hold on to it or let it go. Right? And so this is the contradiction, right, slavery, right, and they can’t hold on to it and they can’t let it go, right? Either way, right, it’s destructive, right?

And the thing we have to understand about Mississippi: Mississippi is the one that leads the struggle in the country, right, in 1868 with the black codes, right, 1875 when it overthrows the black-elected governor, 1890 when it says black people should no longer vote in Mississippi, then right down to 1955 after the Supreme Court decision when they organize the White Citizens’ Councils and spread them all across the South. Nineteen sixty-one, when the Freedom Riders come up, Mississippi says, the buck stops here: you may get into this state, but you do not get out. Right? And then even in 1980, when Reagan runs for president, Trent Lott–now, you know, the Dixiecrats have become the Republicans, right, and Trent Lott invites Reagan to give his first speech after he’s nominated, in Philadelphia, Mississippi, where the civil rights workers were murdered, right? He knows what he’s doing. And so Reagan gives his speech in front of 10,000 white men and announces states’ rights, right? His code word for black subordination, right?

So what happens in the country then is it gets into another roughly three-quarters of a century. I mean, it’s amazing. In 1941, December 12, Roosevelt is president. Francis Biddle is the attorney general. He issues Circular 3591 to every state attorney general and tells them from henceforth the FBI is not to prosecute peonage as indebtedness, right? It’s to prosecute peonage as indentured servitude and slavery. He’s telling these state attorney generals that they have got to stop rounding up young black men for vagrancy, charging them with indebtedness, right, and sending them off to the slave labor camps to build the steel industry in this country, right?

Douglas Blackmon, right, wrote that–it’s an amazing story. It’s Slavery by Another Name, right, his book, right? And Douglas Blackmon was born in 1964 in Leland, Mississippi, in the Delta. Right? So he hits the first grade in 1970 when the state is ordered to desegregate. But his parents, they’re not wealthy. They can’t send him to private school. And they have some conscience. So he goes to school with black kids.

When he hits the seventh grade, for a reason he is not sure of he decides to enter an essay and write about Strike City. Now, Strike City happened in 1965, right? Right there near Leland, workers move off the white plantation, demanding wages, real wages, and set up a little town that they call Strike City. And Frank Smith, who was a SNCC field secretary, goes and actually lives with them in Strike City, right? And so he writes about this, and then he wins a prize. And then they ask him to give his talk to the Rotary Club. And at the Rotary club there’s one of the night riders who was riding by, shooting in strike city. He’s furious and attacks this young kid. And so he discovers that he’s not dealing with ancient history, right?

He becomes a Wall Street Journal reporter, right? He’s over in Europe writing about the Berlin Wall and everything. He asked himself a really important question. He says, what if I investigated American corporations and their relationship to black labor in the same way as German corporations have been investigated vis-à-vis the Holocaust? And he writes this article that appears on the front page of The Wall Street Journal, right, and gets inundated with letters, people telling him about their relatives who were part of this mass incarceration, right, and slavery, right?

And so we’re dealing with the period from the end of Reconstruction, 1875, right down into World War II and that Biddle epistle. Now, why is Biddle sending out that letter? Because Roosevelt–the country has just been attacked. Pearl Harbor, right? December 7. And Roosevelt knows he’s going to need black soldiers, and he knows that Japanese are going to propagandize blacks soldiers: why are you over here fighting? I mean, Amzie, one of the things he told me when I met him, because he served in the Pacific campaign in World War II–so he’s riding on the Burma Road listening to Japanese Tokyo Rose, right?

MOSES: Right. And she’s asking him, why are you here fighting us, right? So–.

MOSES: Of the civil rights–well, of the civil rights movement, right? Freedom Summer, right? We’re going down to Mississippi next summer, right? We’re celebrating the 50th anniversary. It’s 2014. Fifty years have passed since 1964, right? But 50 is two-thirds of 75. So, in terms of what’s going on now, we’re lurching backwards, right? So we have lurched forward and backwards and forward and backwards, right, across roughly, it seems to me so far, every 75 years. So the issue really is the We the People force.

I mean, I think the thing that we can say–which is true–is that in spite of ourselves as a country, we have expanded the reach of the preamble, the part that says we the people ordain and establish the Constitution. So we began with white male property owners who were the constitutional people. But over two and a quarter centuries we have expanded the reach of who the constitutional people are in the country, and the civil rights movement, right, opened that up, right?

But what’s facing the country in this century, I think, is whether or not that reach gets expanded to include young people. I mean, I think the kids now who are between ten years old and 40, they will be running the country 30 years from now. They will be between 40 and 70, right? And they will be the ones that will be part of this third, three-quarters of a century lurch. It’s going to lurch, the country.

JAY: Well, we are going to continue this discussion with Bob Moses. Please join us for the next segment on The Real News Network.