Larry Wilkerson says the US government is raising the danger of nuclear war by spending more than a trillion dollars to upgrade the American nuclear arsenal, with no real objective other than money making - with host Paul Jay

Larry Wilkerson says the US government is raising the danger of nuclear war by spending more than a trillion dollars to upgrade the American nuclear arsenal, with no real objective other than money making - with host Paul Jay 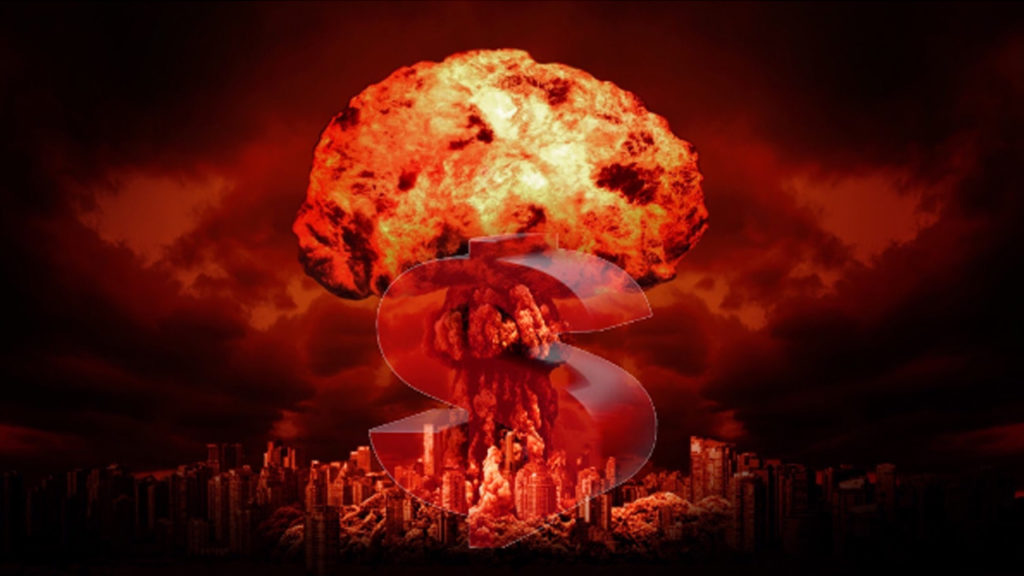 LARRY WILKERSON: The man who said, “There’s a bias in this town,” referring to Washington, D.C., “toward war,” to me in the Roosevelt Room in November 2015–there is a bias in this down toward war? No shit, Mr. President.

PAUL JAY: Welcome back to The Real News Network. I’m Paul Jay, and we’re continuing our series of interviews with Colonel Larry Wilkerson, who joins us again in the studio. Thanks for joining us, Larry.

LARRY WILKERSON: Good to be here.

PAUL JAY: One more time, Larry is a retired U.S. Army soldier and was the former chief of staff to the United States Secretary of State Colin Powell, and he’s teaching at the College of William and Mary.

So as we were discussing the film Vice, and I started looking back at this report from the Project for New American Century and their recommendations, some of the current move of the Trump administration, John Bolton being in the Trump administration, who’s one of the–is one of the minds, ideologues, behind this thinking that led to the Iraq war, and such. I was quite moved or struck by my interview with Daniel Ellsberg–I did this 13-part series with him recently. And the extent to which the Trump administration and the Obama administration and the Pentagon, the planning for the future is a Space Force, the weaponization of space, and two, a trillion-dollar upgrading of America’s nuclear arsenal. And they want to–they’re also talking about a new anti-ICBM radar system, back into Reagan-style Star Wars, where they can fire at ICBMs from the sky, and all kinds of things. And Ellsberg says that this is insane if you’re actually serious about any of it, because now that we know about nuclear winter, that it only takes a handful of nuclear weapons to create the kind of firestorms that would create such ash in the stratosphere that it’s the end of human life, that you don’t need a thousand or 2000 or 3000 weapons. You know, once this thing starts, it’s over.

But it seems like the way the the Pentagon and various White Houses–and I’m saying it’s both Democrat and Republican, although I think these are particular crazies in power at the moment–either they don’t believe it–I mean, are they, are they nuclear winter deniers the way are climate deniers? Or does it–none of it matters because there’s just so much money to be made in doing all of this?

LARRY WILKERSON: I think you put your finger on it. Sad to say, it’s mostly about money. When we were shutting down all manner of things in ’91 and ’92 at the end of the Cold War, we being Colon Powell and the military, cutting the military by 25 percent, and so forth, we got a real good look into the military-industrial complex; everything from bringing in the leaders of most of the major defense contractors, to watching what they did after we told them that they were going out of business if they didn’t change what they were doing. You know, Grumman, you can make school buses, whatever it was. And we knew darn well that within 10, 15 years we’d probably have a monopolistic, six or seven majors, and we’d have a real problem on our hands with shoddy equipment, overcost, and everything else.

But just looking back on that and listening to some of the arguments we got, especially from the nuclear complex–now, you think, that’s in the Department of Energy. That’s not even counted in the defense budget. That’s a very narrow–ooh, no. Pushback major from the congressmen and senators from the states where these nuclear complexes are, and pushback major from the universities who get funded by the research dollars for this sort of thing.

PAUL JAY: Johns Hopkins here in Baltimore gets $1.8 billion of direct federal subsidy, almost double what MIT gets, because of the advanced physics lab, which is doing nuclear weapons.

LARRY WILKERSON: Don’t doubt it. And so I’m stunned at this small little niche industry I thought. And all of a sudden we’re getting major pushback from these people; so much so that we wound up having to preserve a lot of probability that we didn’t really need for strategic purposes. We had the Air Force do a study that said, for example between 600 and 1200 would be fully–all that was necessary for full deterrence. You know, as long as we didn’t start an arms race, and have the Russians building more, and the Chinese building more.

PAUL JAY: Ellsberg says with the nuclear weapons you can have, like, 10, and that would be the end of the world.

LARRY WILKERSON: Well, there’s–you know, you’ve got to deal with the complex, and you’ve got to deal with the target tiers, and everything else. You could get down–when you get the Air Force to say that you can get down to that–and a lot of that reasoning was behind the Moscow Treaty in 2002 when we really, essentially, said, with Russia agreeing, that we were both, with 30,000, roughly, each at that time, going to come down to somewhere between 1200 and 2200. And then we move on from there. That was a monumental accomplishment that Powell got very little credit for.

And by the way, Bolton was involved in that, too. Bolton, who doesn’t believe in arms control, by the way.

PAUL JAY: They pulled out of this agreement.

LARRY WILKERSON: Well, it’s dead now, with START having sort of overwhelmed it. And the INF agreement is the real–the Intermediate Nuclear Force agreement is the real bone right now. There is some rational argument about how if only Russia and the United States are signatory to a treaty, that doesn’t inhibit China, it doesn’t inhibit India, or anybody else who’s got nuclear weapons capability.

PAUL JAY: The thing I don’t get in some ways about this is that the more you quantify, the more numbers you have, the more potential there is for accident.

PAUL JAY: Don’t they get it? That-

LARRY WILKERSON: And looking at Pakistan, let me tell you right now, Pakistan is the number one nuclear threat in the world. They’re sitting on a rather large stockpile of nuclear weapons.

LARRY WILKERSON: It’s still enough to do some real horrendous damage. And India, of course, is sitting on its stockpile. China is thinking about what we’re doing, what Russia’s doing, and changing its nuclear philosophy, and beginning to build more nuclear weapons. Japan, then, will make a decision to go fully nuclear. I think they’re probably within a decade of making that decision right now.

Ellsberg is right in the sense that I think we are approaching a point–and maybe going to go beyond that point–where it’s as dangerous as it’s been since the invention of nuclear weapons; maybe even more dangerous. That Atomic Bulletin, you know, with the clock and everything, moving right there where it was during the Cuban missile crisis. Two minutes from midnight. We’re in–we’re doing this, as you implied, largely for commercial reasons, coupled with political reasons because of those commercial reasons that won’t allow us not to do it. It’s crazy. It’s insane. We need a trillion dollars spent on modernizing and so forth our nuclear weapons complex over the next 10 years like we need a hole in the head. It’s absurd. And yet we’re going to go ahead and do it.

And you put your finger on it. It’s the complex. It’s the people who make money off this. And it’s the people who make their living out of talking about these sort of esoteric things like nuclear deterrence, escalation, nuclear war, and so forth, and never stop–as you said in the opening of our first session-never stop and think about the bigger picture. The bigger picture like the end of the world, the end of humanity. The same problem with climate change, of course; climate change not quite as imminent, if you will, but still right there.

PAUL JAY: It seems similar in the sense that the same people that deny nuclear winter, they deny climate-

LARRY WILKERSON: You get Inhofe bringing that snowball into the Senate chambers and suggesting that that’s somehow a scientific rationale for climate change not existing. What an idiot. But look where he gets his money.

PAUL JAY: And maybe to close the loop on the discussion on the film, to some extent, this is my problem with the film, is that it does treat Cheney as if he’s the sort of exception to normal American politics. He may be exceptional as an executor of this craziness. But if you can plan to have this nuclear arsenal–and it’s under Obama that this trillion dollars gets approved.

LARRY WILKERSON: The man who said, “There’s a bias in this town,” referring to Washington, D.C., “toward war,” to me in the Roosevelt Room in November 2015–there is a bias in this down toward war? No shit, Mr. President.

PAUL JAY: Yeah, no shit. And the mentality that you can create a nuclear arsenal when you already know that the missile silos are falling apart.

PAUL JAY: That’s the other point Ellsberg made. He said all the money that’s being spent on ICBMs and missiles and all the rest, it’s a total crock, because the real weapons are on submarines. The land-based stuff is all nonsense. And he made an important point, too. It’s true for the Russian military-industrial complex. They love each other. And the rationale-

LARRY WILKERSON: They hugged each other all during the Cold War. Oh, yeah. Missile gap? Oh, let’s talk about a missile gap. There is no missile gap. But Kennedy made hay while the sun shone.

PAUL JAY: All right. Well, thanks very much, Larry. I hope people get to hear this.

LARRY WILKERSON: Thank you for having me.

PAUL JAY: It’s time to wake up. Past time.

Col. Wilkerson: US Would Face a Unified Venezuelan Military in an Armed Intervention

US Military Budget Reveals an Offensive Posture, Russia and China on Defense – Wilkerson