Dr. Roger Cooke explains that, according to a new study, sea levels could rise by over 2 meters by the end of the century

Dr. Roger Cooke explains that, according to a new study, sea levels could rise by over 2 meters by the end of the century 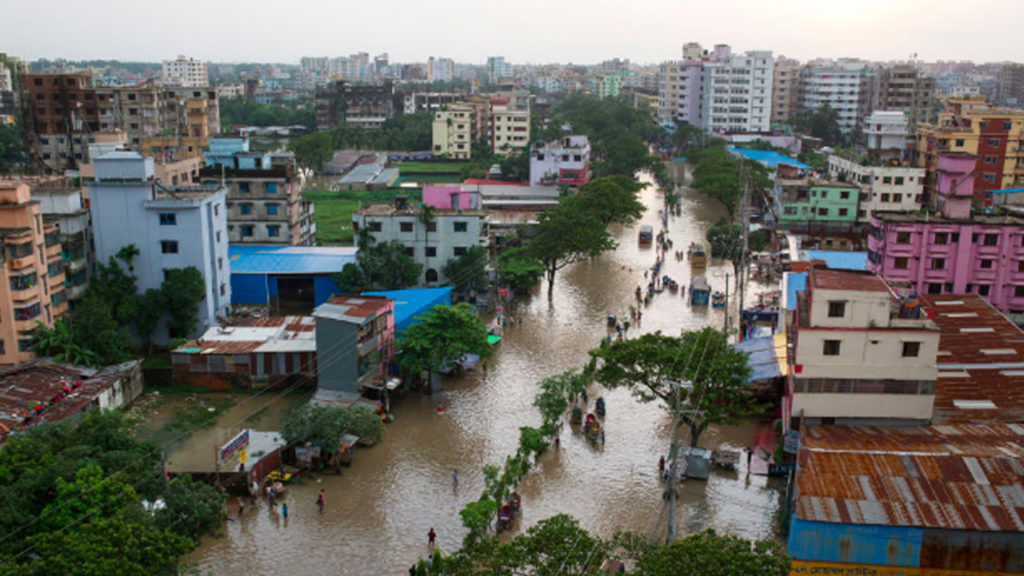 DIMITRI LASCARIS This is Dimitri Lascaris, reporting for The Real News Network from Montreal, Canada.

A new study by leading scientists has concluded that by 2100, sea levels could rise to a far greater level than previously estimated. Sea level rise of such a magnitude would have devastating consequences for humanity, particularly for the tens of millions of persons who live in low-lying coastal regions. The study, entitled Ice Sheet Contributions to Future Sea Level Rise From Structured Expert Judgment was published on May 20, 2019 in the Proceedings of the U.S. National Academy of Sciences. Until this study, the prevailing and long-held view has been that seas would rise by a maximum of just under one metre by 2100. This new study based on expert opinions projects that sea level rise could be more than double that figure.

Now here to discuss this study with us is one of its co-authors, Dr. Roger M. Cooke. Dr. Cooke is a Chauncey Starr Senior Fellow at Resources for the Future. His research has widely influenced risk assessment methodology, particularly in the areas of expert judgment and uncertainty analysis. He’s recognized as one of the world’s leading authorities on mathematical modeling of risk and uncertainty, and he joins us today from Washington D.C. Thank you for coming on to The Real News, Dr. Cooke.

ROGER COOKE Thank you for having me.

Dr. Cooke, before we talk about the findings of the study, could you please explain to us a little bit the methodology of the study that you and your co-authors employed? As I understand it, this is a structured expert judgment study. What does that mean, for laypersons?

ROGER COOKE OK. We interviewed in total 22 experts, roughly half of them in the United States and the other half in Europe. And the experts quantified their uncertainty with regard to the physical processes that are driving the behavior of the ice sheets. And the unique thing about a structured expert judgment study like this one is that experts are also asked to quantify their uncertainty about variables from their field to which they don’t know the answers, but to which the answers become known after the fact. And from that sort of information we can judge how well experts are able to quantify their uncertainty. And we use that information in combining the expert judgments.

So I don’t know how deeply you’d like me to go into this. I can spend a lot of time talking about it. But let me pause here and see how deep your level of interest will go.

DIMITRI LASCARIS I think that’s enlightening. I think we should talk next about the actual results of the study, which are quite concerning. You know, as I indicated my introduction, the authors, you and your co-authors, concluded that a global total sea level rise exceeding two meters could occur by 2100. What, in your estimation, is the probability that a sea level rise of that magnitude will occur by the end of the century?

ROGER COOKE So, the elicitation concerned two temperature scenarios: a low scenario stabilizing at 2 degrees Centigrade above pre-industrial, and a high scenario stabilizing at 5 degrees above pre-industrial. And the 5 degree scenario corresponds roughly with business as usual, so there is no climate policy to limit emissions, whereas the 2 degrees scenario roughly corresponds to the Paris Agreement.

So if we look at the business as usual scenario, then we would say on the basis of our study that there is about a 5 percent chance that the sea level rise would exceed 2 meters in 2100.

DIMITRI LASCARIS And broadly speaking, Dr. Cooke, what would the world look like if we were to experience a sea level rise of that magnitude?

ROGER COOKE Well, it would be a catastrophe. First of all, remember that it doesn’t stop in 2100. It keeps going. But if we just focus on the 2100 result, that means that about 187 million people would be displaced. It means that all of the low-lying cities in the world would be stressed to one degree or another. So local sea level differs from the mean sea level, and it can differ quite a lot from one region to another. But all of our major population centers that are located on the coast–think New York, Los Angeles, Rio de Janeiro, London, Shanghai, on and on and on, they would all be stressed. That means they will have to make enormous expenditures to defend their coastline, and probably have to start moving inland.

DIMITRI LASCARIS And as we know, the Syrian war caused an outflow of desperate migrants in the range of I think about 10 million persons. [inaudible] had quite destabilizing effects throughout the Middle East and even into Europe. One can only imagine the consequences politically in terms of global conflict if we were to see tens of millions of climate refugees forced to leave coastlines in search of a stable environment.

ROGER COOKE Yeah, that’s correct. And we’re talking about the displacement of some 187 million people. But, I emphasize, it doesn’t stop in 2100. The seas will keep rising, and the situation will be a continuous, slow-moving continuous crisis.

DIMITRI LASCARIS And could you explain to us briefly–and I think this may get back to the question of methodology–why this study’s estimate of maximum sea level rise is so much higher than the previous widely accepted estimate?

ROGER COOKE Well, the IPCC in their estimates focuses on what they call the likely range. And that means, mathematically, the range between the 17th and the 83rd percentile. And our results focus on the tails of these distributions, as well. That’s one significant difference. Another difference is the methodology which is employed by the IPCC, which has a long and not too glorious history, it is called the Bogsat method, which means a bunch of guys or gals sitting around a table. That’s how they quantify their uncertainty, by these sorts of processes.

This sort of methodology was used in the U.S. in the late ’60s early ’70s, in particular by the defense intelligence agencies, in combination with this calibrated language where you can say if you’re–if you think there’s a two-thirds probability it will be between here and here, you can say that’s the likely range. OK. So you have these verbal qualifiers to communicate your uncertainty to a lay public. And this method of communicating uncertainty was also abandoned by the U.S. defense intelligence agencies in the ’70s because these probabilistic statements are not verified. There is no validation that when you say you’re two-thirds confident that it will be in such a range that it will actually occur with the probability 66 percent. Or if you say you’re 90 percent confident it will be between these values, will it occur in that interval 90 percent of the time? That’s the validation that is missing in the methodology of the IPCC. In addition to that, we know from lots of psychological research that people are not good at quantifying their uncertainty, and that we are subject to many sorts of cognitive biases, and everybody knows this.

But the structured expert judgment methodology is explicitly designed to guard against these cognitive biases. And the way in which we do that is to ask experts to quantify their uncertainties about things to which we know the real answers from their field. Very important. And what you see if you do that is a large diversity within the population of experts in their ability to perform these tasks. So just very simply, if an expert says he’s 90 percent sure the true value is going to be here for this variable, and it’ll be over here for this variable, and over here for the next variable, and if you go through a number of those assessments and you look how often did the true value occur in those 90 percent confidence range, you will find a great diversity in their ability to accurately assess their own uncertainty. And this sort of study really takes that into account and makes a big effort to validate the experts uncertainty assessment in this sense.

Now, this methodology makes a very serious attempt to regard the expert uncertainty quantification as real scientific data which is subject to validation, just like any other scientific process. And that’s the main distinction between this methodology and other methodologies. Let me stop there.

DIMITRI LASCARIS Finally, Dr. Cooke, three days before the publication of your study, interestingly, the Guardian newspaper announced that it had updated its style guide to introduce terms that it says more accurately describe the crises facing the world environmentally. Instead of ‘climate change,’ the Guardian’s preferred terms will now be ‘climate emergency,’ ‘crisis,’ or ‘breakdown.’ In view of this, and more recent scientific analysis of where we’re heading in terms of climate change, do you feel that that’s an appropriate change in the terminology, and that we should be talking today, in the world in which we currently live, of a climate crisis rather than the more neutral and less concerning term ‘climate change?’

ROGER COOKE Yes, I do think it’s appropriate to start talking in terms of emergency. And whereby we have to emphasize that these predictions are not certain. These have a relatively low probability of occurrence. But you have to take those sorts of things into account when you are planning. Let me give you a very simple comparison. If you are about to put your children on an airplane, and the authorities say, well, it’s very likely that this airplane is OK, but there is a 5 percent chance that it will crash. Now, would you put your children on that airplane? I think not. So just saying what you think is likely is not enough. And in order to take decisions we have to see that we are facing a problem of decision under risk. And so I think in that respect, this shift of terminology that you identified at the Guardian might be helpful. But we must not fall into the trap of thinking that we know for certain what’s going to happen.

So I would emphasize that in our study, even in the high temperature scenario, out to 2300, there is still a small probability that the ice sheets could actually increase in mass relative to 2000. That is to say that the ice sheets would actually make a negative contribution to sea level rise. That’s not likely, but it’s not impossible. That’s how large our uncertainties are. And we just have to face that. We have to decide under uncertainty. And that means that we have to be aware of the tails of these uncertainty distributions.

DIMITRI LASCARIS Well, we’ve been speaking to Dr. Roger Cooke about a new study of which he is a co-author estimating that sea level rise by 2100 could be substantially greater than previously estimated. Thank you very much for joining us on The Real News, Dr. Cooke.

ROGER COOKE Thank you for having me.

DIMITRI LASCARIS And this is Dimitri Lascaris, reporting The Real News Network.