A new study by the OECD shows that particularly millennials and the US middle class is being squeezed by expenses that rise faster than their incomes, but the phenomenon is taking place in all developed countries

A new study by the OECD shows that particularly millennials and the US middle class is being squeezed by expenses that rise faster than their incomes, but the phenomenon is taking place in all developed countries 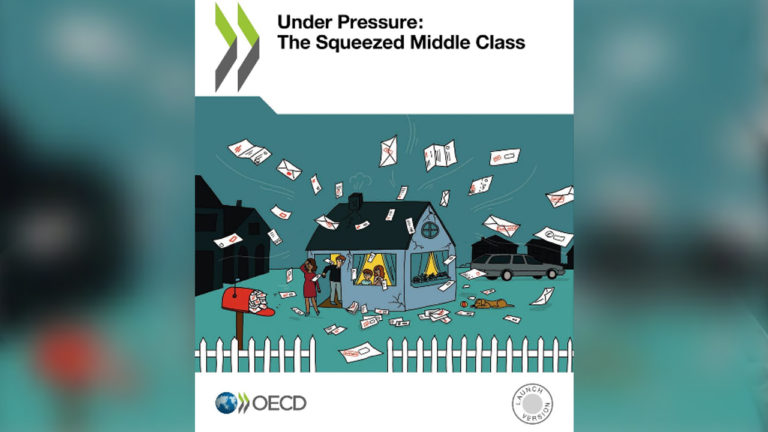 GREG WILPERT It’s The Real News Network and I’m Greg Wilpert in Baltimore. A recently released O.E.C.D. study finds that the middle class in 34 developed countries is being squeezed to such an extent that its income is shrinking. The study titled Under Pressure: The Squeezed Middle Class, looks at the growing economic hardship of the middle class and especially of the younger generation among O.E.C.D. member states. The O.E.C.D., or Organization for Economic Co-operation and Development, is an organization with 36-member states, mostly of the world’s more developed economies. Joining me now to discuss the report is Michael Forster. He is a Senior Economist and Policy Analyst at the O.E.C.D. Directorate for Employment, Labor, and Social Affairs, and is a co-author of the aforementioned report. Welcome, Michael. Thanks for joining us today.

GREG WILPERT So why is it important, first of all, to study the changes in the middle class, rather than discuss average trends in standard of living, or the extent of poverty in a society?

MICHAEL FORSTER The point is middle class is the economic foundation of a society, but not only that; it is the democratic foundation. Not to forget in O.E.C.D. countries, the middle class pays two-thirds of taxes and contributions, but it’s also a recipient of two-thirds of transfers and benefits. The middle class is in a way a guarantee for a well-functioning, prosperous society, and used to be in the past a sense of aspiration. But in the last one to two generations, this dream has started to vanish.

GREG WILPERT So yeah, that’s actually the next point. Why exactly is it shrinking and why is this dream starting to diminish? What are your main findings about the middle class and what are the main ways under which it is under pressure, as the report says? Also, if you can mention, are there any countries that particularly stand out?

MICHAEL FORSTER Yeah. It’s not so much about the shrinking size of the middle class. The middle class decreased by three to four percentage points in the U.S., or a bit more, 5 points. But the point is rather to look at over generations. So it used to be very common to be part of the middle class for the baby boomers. But since that generation, the probability to reach the middle class has been broke significantly at some point. And this is due to three concurrent developments. One is, sluggish income growth. So in most O.E.C.D. countries, income growth since the last ten years is much, much lower, especially at the middle. Second is, insecurity in the labor market. The new labor market functionally makes it so that you have less of a security. And thirdly, the cost of a typical middle-class lifestyle has increased a lot. Typically a middle-class lifestyle means, housing, education, and health. So in some countries, it’s more to housing— lacking funds. Some countries it’s more to education, like in the U.K. And in the U.S., it’s all the three of them.

GREG WILPERT Are there any countries though that particularly stand out in terms of the increasing difficulties that the middle class has?

MICHAEL FORSTER Well in European countries, it’s a bit more in Germany than in other countries. And on an O.E.C.D. level, yes, it is the United States, which has a very smaller middle class than actually other O.E.C.D. countries. It’s very interesting because usually you have a correlation between overall living standards, G.D.P. per capita if you wish, and the strength of the middle class. But there are two big exceptions in this picture. One is the U.S. with a relatively very high G.D.P. per capita, but a middle class which is barely over 50 percent, which is about just 61 percent. The other exception are some central European countries like the Czech Republic, Slovak Republic, Slovenia, where you have a relatively low G.D.P. per capita but a very, very strong middle class.

GREG WILPERT So what happens to the economy if the middle class is under pressure more? If the new generation has greater difficulties in making it to the middle class, what does that mean for the economy, more generally speaking?

MICHAEL FORSTER Well if aspirations vanish, opportunities go hand-in-hand. As I said, the point is less the overall size but if— for instance, the economic rates of the middle class— if you put together all incomes generated by the middle class and juxtapose this to the incomes of the upper class, this ratio was four-to-one 20 years ago, and today it is less than three-to-one. And this of course translates also not only into the economic rate, but also the political rate, the decision-making rate of the foundation of society, which is the middle class. Interestingly, parsing this ratio, it decreased from 2.5 in the U.S., to below two now, 1.8.

GREG WILPERT And so, what are your recommendations for reversing this pressure on the middle class? What can governments do?

MICHAEL FORSTER Well in several ways that governments connect. Since we have identified three trajectories— one is incomes, the second one is labor markets, the third one is consumption expenditures— the policies need to be focused on these three tools, these three dimensions. So the first one in terms of income and the distribution of income, there are many ways how you can pose a fairer distribution of wages, of earnings. For instance, for measures like you have in the U.S., the E.I.G.C., but we’re making it stronger, this inward benefit. The second is, our labor market means devoting a lot to vocational and other education training, and that these education training offers go to them who need it, which are young people and those in the lower middle class. And then thirdly in terms of consumption, depending whether it’s in a particular country the housing, education, or the health sector, investing in services and also offering housing that helps people to make to the middle class.

GREG WILPERT Now finally, this goes beyond your actual report, but historically speaking the countries of the O.E.C.D. have actually pursued many of those policies that you’re recommending but have been dismantling them in the past few decades. To a large extent you could say because of globalization, because of neo-liberalism, these kinds of tendencies which at least according to some people’s arguments, has been making it more difficult for them to offer these kinds of policies. On a larger scale, what can be done? Is it just something that the countries can actually fight against, what some call neo-liberal globalization? Or does something have to change on a global level to make it more possible for these countries to fight against the pressure on the middle class?

MICHAEL FORSTER I think both is true. In an earlier report, which was called Divided We Stand: Why Inequality Keeps [Rising], we have looked at the issue of globalization and other driving factors of inequality. We found that policies are very much important and can change the game. Now you are right that before the crisis, in the two decades before the crisis, there had been a different thinking about structural and structural growth policies. But I think, and we have a lot of examples for that, that since 2007, since 2008, national governments but also international organizations including my own, have changed its course and now think in terms of inclusive growth. And this is I think the way to go.

GREG WILPERT Okay. Well we’re going to have to leave it there for now. I was speaking to Michael Forster, Senior Economist and Policy Analyst at the O.E.C.D. Directorate for Employment, Labor, and Social Affairs. Thanks again, Michael, for having joined us today.

MICHAEL FORSTER Thank you so much. Goodbye.