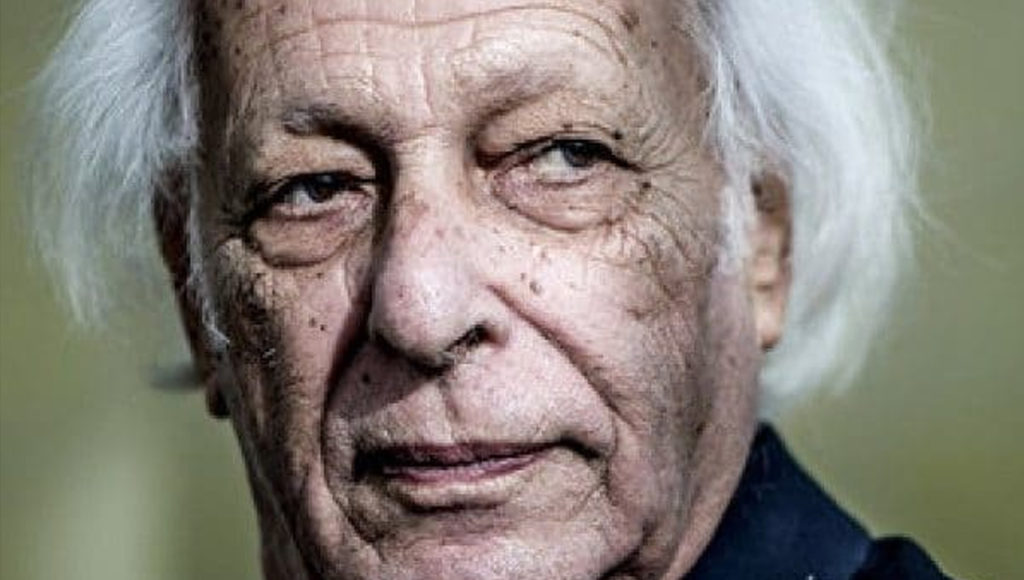 BEN NORTON: The world-renowned political economist Samir Amin passed away on the 12th of August at age 86. He left behind a radical legacy that profoundly influenced the globe. Amin was a tireless advocate for Third World liberation who transformed the way we understand capitalism and imperialism. He dedicated his life to not only understanding what imperialism is, but also exploring how to fight it. Samir Amin emphasized that imperialism in the 21st century is different from imperialism in the 20th.

Since the collapse of the socialist Eastern Bloc, the world today is a global dictatorship of monopoly capital, dominated by U.S. finance. The planet is controlled by a small handful of capitalist oligarchs who have unimaginable power.

SAMIR AMIN: Capitalism has become the dictatorship of oligarchies in the United States, in Europe, in Japan. The demonstration in New York, we are the 99 percent, is correct. One percent is controlling everything in the U.S., and even less than one percent in the number of people. Now, so that means that it’s the end of democracy. Democracy has become a farce. Electoral democracy leads nowhere, because if any majority would be against the dictatorship of the oligarchy, they are annihilated immediately, and compelled to adjust.

BEN NORTON: Samir Amin explained how, since the end of what is commonly referred to as the Cold War, which was really a U.S.-led capitalist war on socialism throughout the globe, that war continued even after the collapse of the Soviet Union right up until today, destroying any country that tries to pursue a path independent from the U.S.-dominated financial oligarchy.

BEN NORTON: Amin stressed that international imperialist institutions like NATO and the World Bank helped maintain this capitalist dictatorship, so leaving and dismantling these institutions is crucial in the struggle for economic and political independence and self-determination.

SAMIR AMIN: You have to fight and move out of NATO. It’s very central to the policies of maintaining this financial oligarchian power in the West.

Many of you have been brainwashed by the U.S. propaganda, by U.S. universities, saying that it is no alternative but capitalism and globalization.

BEN NORTON: Samir Amin, whose parents were Egyptian and French, and who spent much of his life in Egypt, was deeply involved in the national liberation and decolonization movements of the Global South in the 1960s and ’70s. He also developed the well-known concept of Eurocentrism. But as a Marxist, Amin always maintained that Eurocentrism is not just a cultural problem, but an economic and political one.

The Real News spoke with political economist Ali Kadri, who was a friend of Samir Amin, and who reflected on his legacy.

ALI KADRI: I think his importance as a particular individual on the left is in the fact that he was anti-Eurocentric. He demystified a lot of the Eurocentrism that has for a long time blinded- you know, Eurocentrism doesn’t necessarily mean, you know, Europe in the geographic sense. All of those with the culture of Europe that extends across the globe, that see the world only in terms of development in European culture, in European modes of production, in European property relations. And these things, it’s what imparted this progress that we’ve seen so far upon Earth, which is not much progress, as we all know. He was able to demystify, from an internationalist perspective, how the struggle emerged, how capitalism versus as a holistic condition relating to the globe, and how resistance to imperialism must take shape as a holistic condition through international action.

And, and because production is a global process, a social process as well, it’s a social process that involves the laying of the social foundations for production, there is unequal- unequal conditions arise, of course. We know how the system works. There’s going to be raw material and labor and primary goods exported to the center, and then the system reverts and gives us back manufactured goods, where the system appropriates much value for little price, and sells at a high price. And we have profits.

And this accentuates the unequal development, unequal within the country, within countries themselves, and across countries. But within a structure that actually shortchanges the South.

BEN NORTON: Samir Amin saw the Global South as the locus for global revolutionary transformation. For decades he directed the Third World Forum in Senegal. Amin was a leading intellectual in what was called the Non-Aligned Movement, the attempt to form a political unity in the Global South in a common struggle against imperialism. Amin pointed out that the Cold War was not just a conflict between the U.S.-led capitalist West and the Soviet Union-led socialist Eastern bloc. This perspective erases the Global South, which formed its own movement in the Afro-Asian Conference of 1955, known as the Bandung Conference. For his entire life, Amin saw Bandung as a model that should continue in the future.

ALI KADRI: The U.S. propaganda today says that this history has to be read as a history of the Cold War; that is, two actors, U.S. and Soviet Union. And all the others are allies or lackeys of one of the two. This is the concept of the Cold War. It is a lie. The countries of the South were non-aligned, meaning the U.S. and Soviet Union, they were not allied on globalization of that time. And this is why Europe would invent a few years later the word ‘self-reliance.’ I would use a year, some year even before, de-linking. De-connection.

ALI KADRI: It is the material circumstance that shapes consciousness, and material circumstance is not necessarily the objectification of the technological condition within the productive forces. It’s not because there’s better machines. The productive forces also enforce, is a social category that enforce forms of social organization. The conditions for revolution in some Southern states where there is this overlap between the social aspects of the productive forces, and the acute inequality and acute repression that follows acute inequality where we see that there’s a possibility for a brighter future.

And here, of course, for this to be successful, Samir, of course, talks about economies of self-reliance. The Bandung was a very important step in those, for him as a project, and the revival of Bandung has always been, he’s always talked about that.

BEN NORTON: To explore ways for countries in the Global South to try to forge an independent path, Samir Amin developed the concept of de-linking. Pro-capitalist critics have portrayed de-linking simply as a glorified form of isolationism and autoarchy. But Amin stressed that it is, in fact, the opposite.

SAMIR AMIN: De-linking does not mean that. It’s a strategy that you try to submit external relations- which means that you have external relations, political, economic, trade- to the priority of your own internal development. It’s a strategy of submitting external relations to your own needs, to the extent that it is possible. Nothing is possible 100 percent. Of course the margin for a huge country and with globalist history, as China, the budget is wider than it is for a poor country of less than 1 million inhabitants here or there in Africa. But it is always a margin, smaller or wider.

ALI KADRI: Then we come to de-linking, because under globalization we have to have a new- globalization was hitching everybody, was hitching everybody to the bandwagon of the FIIs, and the fact that financialization, which was already there, has taken new forms, has become much more significant in the reproduction of capital. And that is where Samir Amin and his ingenuity come in; the fact that he’s capable of developing concepts to marry, to correspond with the changes in the times. And that’s his genius. And that’s where he stood.

But this, of course, doesn’t negate the fact that we need to articulate all the forces that are ready for the struggle. And that’s where internationalism comes in. This is not a geographic, you know, view of the world, that when we say Eurocentric we mean the Europeans, or whiteness, or anything of this nature. It has- this is beyond that. This is the abstract capital, which is a real force to which kowtows, you know, to which everything is, has to kowtow, or follows submissively.

BEN NORTON: Samir Amin was a revolutionary optimist who saw the conditions for revolutionary transformation everywhere. At the same time, however, he warned that the capitalist erosion of democracy under the present oligarchical imperialist system is fuelling the resurgence of fascism.

SAMIR AMIN: The period where the decline of democracy, instead of being associated with a politization and understanding that the people need a higher stage of democracy, we move back to fascism. To, not to fascism, or neofascism, call it as you want, in the North and the South. In the North it takes the form that you can see everywhere; in France, in Germany, in everywhere. And in the South in the format of pseudo-fascist mythology, whether Islamic for a number of countries which are Muslim countries, or Hinduist. We see it’s quasi-fascist what’s happened in India with the Modi regime following the Congress Party regimes.

Now. So we are in a period, such a period, is a period as Lenin understood for the first long crisis, a revolutionary potential. Potentially revolutionary. But will this opportunity be taken or not? It’s not of use until today that it will be taken.

BEN NORTON: Samir Amin was much more than a theorist. He was a lifelong activist and revolutionary. For him these economic and political concepts were not mere academic ideas. They were tools to try to change the world. And Amin spent decades writing dozens of books that bequeath these tools of transformation to future generations. While the political economist has passed, his radical legacy will live on and on.

ALI KADRI: He’s truly a man of resistance, a man who resists imperialism. A man who deeply believes that the path to an alternative world is quite optimistic. You know, as every person is. But at the same time, he’s not in the struggle simply to win. He is in the struggle knowing that there could be losses. He’s in the struggle because he is convinced that this is in the dignity of human lives, in the dignity of humanity, and all of humanity. And not with a view to making, to making a front which expands across the [inaudible] nature of social forces. Not necessarily Marxist, in the proper sense. Not necessarily Orthodox Marxist. But all the social groups, all the peasant groups, all the disenfranchised identity groups, and so forth, in a common front, in an internationalist front to spearhead the struggle against imperialism.