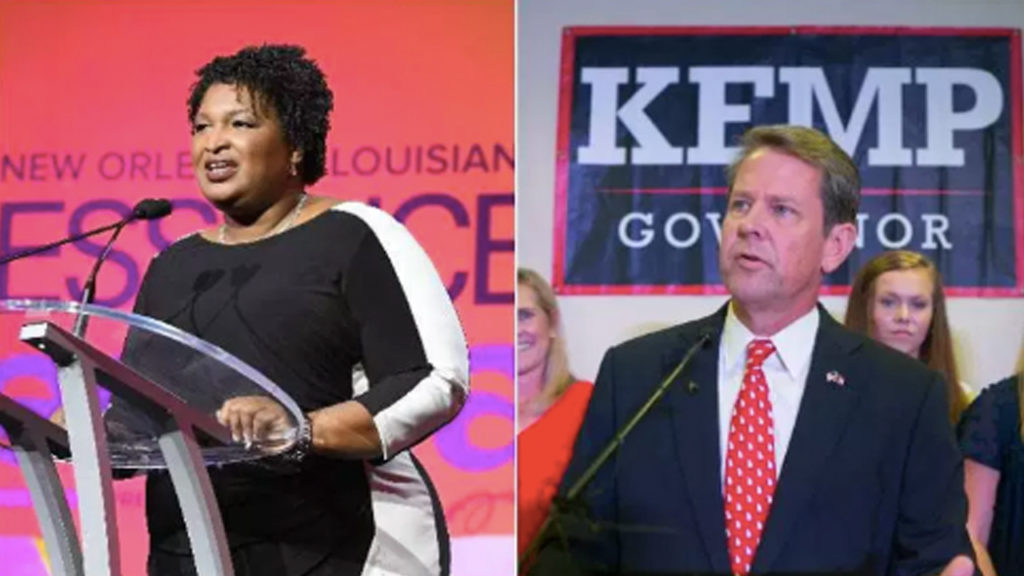 We continue here with Anoa Changa, host of The Way With Anoa. Just to give an update on what’s happening in Georgia, it’s a very close contest happening for the statehouse in Georgia. Stacey Abrams has been fighting this incredible campaign. It’s neck and neck. Georgia is doing one of the biggest acts of voter suppression could that kill her election. So I want to ask Anoa to give us an update here on what is happening in Georgia with this election. This is one that we’re all watching very closely. Anoa?

ANOA CHANGA: Absolutely. I mean, here on the ground folks are fighting fiercely. Last week we saw the Black Voters Matter bus that made national headline news. A group of seniors were going to vote on the first day of early voting, and were told by county administrators that they were not comfortable with them traveling with an unknown third party, which was BS. And we’ve seen like so many different- up and down the board of different things that are going on; just outright blatant misinformation about absentee ballots. There are two current- I think it’s two or three. I lost track of how many lawsuits are against Brian Kemp, our secretary of state, who is also running for governor against Stacey Abrams. I lost track of how many lawsuits there are right now.

But you know, they’ve been tossing out people’s absentee ballots. And it turns out that folks are reporting that that his office was actually sending out misinformation. So it’s a lot that’s happening. What has most recently happened- they actually had their first debate tonight. And then they have another one next week. But they had the first debate tonight.

But what just happened, the October surprise, an image surfaced of Stacey Abrams participating in a protest in 1992, when she was a student at Spelman. So, ’92. A lot was going on in the country. I mean, I was a lot younger than her in ’92. I was probably about 11 or 12. But thinking about that time period, thinking about the divestment from South Africa movement and other stuff that students were a part of- like, she and others had an act of protest where they burned the old Georgia flag- the old Georgia flag used to have the stars and bars in it- as an act, you know, considering what the Confederate flag stood for, considering in the Senate records what it indicates, why it was even enacted, which is specifically to reinforce segregation during a time of rising civil rights activity.

So they’ve tried to make a big deal out of the fact that she was actually burning the American flag, or some other flag, like it was just very ambiguous. But these are all distractions. There’s a lot of distractions right now. There’s actually a Rolling Stone piece out today, I think it is, that has audio from Brian Kemp from a recent event talking about how he’s concerned about this surge of new voters, how he’s concerned about the outreach efforts of Stacey Abrams, the Democratic Party, and other allies in general.

BRIAN KEMP: And as worried as we were going into the start of early voting with the literally tens of millions of dollars that they are putting behind the get out the vote efforts for their base, a lot of that with absentee ballot requests, they have just an unprecedented number of that, which is something that continues to concern us, especially if everybody uses and exercises their right to vote, which they absolutely can, and mails those ballots in. We’ve got to have bigger turnout to offset-

ANOA CHANGA: And while, you know, people who run for election, it’s common for people to be concerned about what their opponent is doing. But this person is our head election official for the state. So Brian Kemp every day increasingly shows why this is a huge conflict of interest, why he does not deserve a promotion, and why we are to be alarmed.

So there are two voter protection numbers that everyone’s been sharing: the 866-OUR-VOTE number, and then there’s also a voter protection hotline staffed by the local, the state party here. I’m not really a party person, but I do appreciate what they’ve been doing to make sure that people have protection at the polls, because we want to make sure that everyone is able to cast their ballot. We’re seeing record turnout, like people were seeing in Texas and other places, too. We’re blowing past early vote numbers from 2014. And there’s a lot happening on the ground, and people are stepping up and getting involved.

So the polls may say what they say, NBC articles may say what they say. But what we’re actually seeing, and the movement, and people getting involved- I’m about to have my kids texting, you know, doing the hustle this weekend as well, when they have a moment. Because I mean, we just got to do our part to make sure everyone’s voting.

MARC STEINER: Well, Anoa Changa, thank you so much. Maybe next week after the debate we’ll get together again to kind of do an assessment of what just happened. It’s always a pleasure to talk with you.

Anoa Changa is an electoral justice staff reporter for Prism, a nonprofit media outlet elevating stories, ideas, and solutions from people whose voices are critical to a reflective democracy.