Highlights from TRNN's event honoring MLK on the 50th anniversary of his assassination, featuring his 1967 speech, "Why I am Opposed to the War in Vietnam," and a discussion with actor Danny Glover, Our Revolution President Nina Turner, and Executive Producer Eddie Conway

Highlights from TRNN's event honoring MLK on the 50th anniversary of his assassination, featuring his 1967 speech, "Why I am Opposed to the War in Vietnam," and a discussion with actor Danny Glover, Our Revolution President Nina Turner, and Executive Producer Eddie Conway 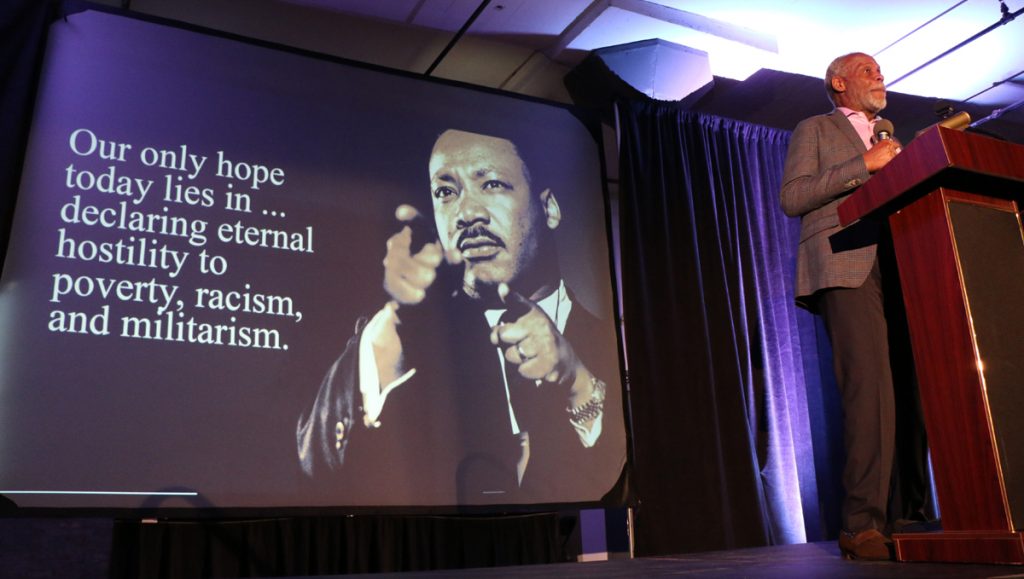 JAISAL NOOR: To mark the 50th anniversary of the assassination of Dr. Martin Luther King, the Real News Network presented King’s speech, “Why I’m Opposed to the War in Vietnam.”.

REV. DR. MARTIN LUTHER KING, JR: I’m using as a subject from which to preach why I am opposed to the war in Vietnam. Now, let me make it clear in the beginning that I see this war as an unjust, evil, and futile war. Rationalizations and the incessant search for scapegoats are the psychological cataracts that blind us to our sins. There comes a time when silence is betrayal. An almost facile connection between the war in Vietnam and the struggle I and others have been waging in America. A few years ago there was a shining moment in that struggle. It seemed as if there was a real promise of hope for the poor, both black and white, through the poverty program. There were experiments, hopes, and new beginnings. Then came the buildup in Vietnam. And I watched the program broken as if it were some idle political plaything of a society gone mad on war. And I knew that America would never invest the necessary funds or energies in rehabilitation of its poor so long as adventures like Vietnam continued to draw men and skills and money like some demonic destructive suction tube.

EDDIE CONWAY: Three months after he made that speech there was a riot in Newark New Jersey. I was in Germany at the time. I was a sergeant in the army. I’d been in Germany for about three years. I decided after seeing that riot and seeing tanks in the streets of New Jersey, Newark, with machine guns pointed at black women and black children, I decided not to go to Vietnam and I decided to come home. I came home, and to a great degree I figured there was problems in America but they were issues that we could take care of. So I started working with the NAACP. I started working with corps and we study integrating jobs and try to get white collar jobs in the black community.

REV. DR. MARTIN LUTHER KING, JR: So we have been repeatedly faced with a cruel irony of watching Negro and white boys on TV screens as they kill and die together. For a nation that has been unable to seat them together in the same schoolroom. So we watch them in brutal solidarity burning the huts of a poor village, but we realize that they would hardly live on the same block in Chicago or Atlanta.

DANNY GLOVER: In some sense contextualized so much into this speech. He brings us to the truth and the reality that we live. In his voice about racism, extreme militarism, his, his, his connecting those to materialism, all those things are the things that we were in some sense to contextualize. But somewhere in his voice, his voice, his profound voice, he was able to take those and have us understand even more than we thought we were capable of understanding.

And sometimes we don’t want to deal with the truth. And the truth of the matter is is that at the time that the Reverend Dr. Martin Luther King Jr. lived, wrap your mind around this, a man that was a champion for justice and peace and love, when the Gallup Poll polled his favorability, that he was in the 30s. I think was about 36 percent. Wrap your mind around that. That is hard for us to understand in the 21st century. Because as Reverend Jackson pointed out in his article today that when the man was on the mission, and even Dr. King pointed it out in his speech when he made comparisons that it was OK for them to be nonviolent against racists and segregationists in the south but is not OK to talk about what we were doing to our brown sisters and brothers across the seas. That was not all right.

SEN. NINA TURNER: So we need to begin to tell the truth about the history that a lot of times, as Professor Eddie Glaude wrote about the whitewashing of the legacy of the Reverend Dr. Martin Luther King Jr., how people on the right use him and twist his words about judging people by the content of their character and not by the color of their skin. Forgetting to put the emphasis on the fact that he was talking about how this country would not give African-American folks an equal opportunity to live out their greatest greatness. That’s what he was talking about and how you got people on the left, the so-called Democrats, who will prop up the memory of the Reverend Dr. Martin Luther King, Jr. but then equivocate about whether or not we deserve Medicare for all, universal health care in the United States of America. We’re done with that.

REV. DR. MARTIN LUTHER KING, JR: Let me say finally that I oppose the war in Vietnam because I love America. I speak out against this war not in anger but with anxiety and sorrow in my heart. And above all with the passionate desire to see our beloved country stand as the moral example of the world. I speak out against this war because I am disappointed with America, and there can be no great disappointment where there is no great love. I am disappointed with our failure to deal positively and forthrightly with the triple evils of racism, economic exploitation, and militarism. We are presently moving down a dead end road that can lead to national disaster.

Beyond MLK: What is to be done, with Danny Glover, Nina Turner, and Eddie

Nina Turner: ‘MLK Was on a Mission of Non-Violence, Even Against Segregationists

The Nina Turner Show: Beyond Wokeness with Kendrick Sampson