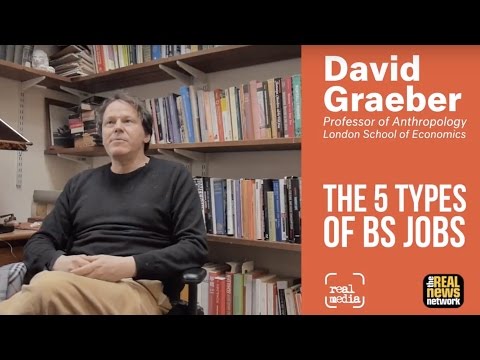 DAVID GRAEBER: I’ve been doing a sort of research project where I made up a Gmail account called [email protected] I’d been advertising on Twitter. I’ve got about 250 testimonies now. I have broken them down into five basic types. There are flunky jobs, which are basically people who just are there to make someone else look good. A lot of people sitting around offices say they basically don’t do anything except pass emails to someone and say, “No, that’s spam.” They’re just there because if you don’t have someone sitting in your desk you’re not actually a real executive. Similar to receptionists at publishing companies where nobody ever calls, they have to be there anyway. Okay, so I have millions of flunky jobs like that.

Then you have what I call goons. Goons are people who are basically there to … You don’t need them unless somebody else has them, sort of like armies, right. If nobody had an army, no one would need an army. Same is true of corporate lawyers, telemarketers, all people like that. They often say, “This is total bullshit. There’s no need for this.” That’s easy. The next one, I call them duck tapers. Duck tapers are people who are there to fix a problem that does not need to exist and everybody knows it. It would be sort of like if you have a roof in the house. Instead of getting a roofer, put a bucket down and hire someone to empty the water every half hour. A lot of corporations do that. They’ll hire someone just to deal with the damage or the fact that something is badly organized because it’s easier than fixing the problem. There’s millions of those kind of people.

Then there’s box tickers. Box tickers are people who are there to allow an organization to say they’re doing something that they’re not doing. There’s a lot of that in government, but corporations increasingly do that too. One person said, “I work at a care home. My job is to like do interviews and collect data on what sort of entertainment people would like to have, which I then tabulate and file.” The problem with box tickers, of course, is that it takes up so much time that you could be spending actually doing the thing. This is like, I could be entertaining these people, but actually I’ve just spent seven-tenths of my time finding out what they would like to be doing for entertaining, and then losing it because nobody cares. That’s a box ticker.

Then finally, task masters who are basically middle management. They’re people who are there either to supervise people who don’t need supervising, which is most of middle managements. People write to me all the time. They say, “I’m supposed to be making them work though they work all by themselves. I have to pretend like I’m doing something, so I make up these numbers and I do box ticking exercises or something.” Then also make up new bullshit jobs. There’s a lot of people who do that.

RANJAN BALAKUMARAN: A job which is to make up new jobs.

DAVID GRAEBER: Yeah, there are some people that are there to eliminate bullshit jobs but realize their own jobs are bullshit because they’re not actually going to do it. They’re just box tickers. There’s one guy who said he worked for a bank where his job is to come up with basically more efficient ways to do things. In his 15 years, he says he’s never seen one of his programs actually adopted because they always figure out it would mean firing someone who’s one of their flunkies. Everybody’s like, “But, but, but, no.” Because managers and executives are judged basically by how many people they have working under them. We have a really, really twisted idea of the value of work.

There was a time that people thought that work produces something. It is there. All value comes from labor. The labor theory of value is almost universally accepted in the 19th century, but they had a very silly focus on factory work, craftsmen, production. Most work isn’t production, right. Most work is caregiving. Most work is maintaining things. As I always say, you make a cup once. You wash it like 1,000 times. Most work is keeping things the same. It’s not recreating things. They lost that. It became easy to change the discourse and say, “No, no, no. Production is really created by job creators and wealth producers or businessmen who come up with the ideas, and you’re just a robot doing what you’re told.” Then, so another question’s, well, how do you make people validate work at all?

You tell them, “Well, it’s morally good.” If you’re a parasite, that’s bad, right. You need to be working harder than you want to be at something you don’t really like very much or else you’re a bad person and then people resenting each other. Now increasingly, if work is about self-abnegation, self-sacrifice, and this whole puritanical, moral discourse, well, the more you get out of the work personally, the less valuable it is. People actually think like that. They say, “You’re actually making cars. You’re teaching children. You want benefits too?” There’s this idea if you’re getting something out of the work, they probably shouldn’t pay you at all, but they certainly shouldn’t pay you as much. In a weird, paradoxical way, even the knowledge that you’re producing something has come to be seen on some unconscious and sometimes conscious level as subtracting from the value of the job rather than adding to it.

RANJAN BALAKUMARAN: Production itself, that is worshiped.

DAVID GRAEBER: Right, but also resentment of people who get to something with their hands that actually makes a difference. Because people will say that, they’ll say like, “Look at these autoworkers. They’re being paid $25 an hour and they’re getting all these benefits and vacations.” It’s like, well, why not? They don’t seem to object if some guy sitting in an office doing nothing gets much more money than that. It’s because there’s this idea, “Well they get to make cars. They get to sit here, do nothing, pretend to work all day and is miserable. They want benefits like I get too?”

That’s real. People really think like that. Actually a right-wing activist confirmed this on one of the blogs when I was saying that, that they cultivate a resentment against people with real work. That he said, “Yeah, that’s true because when we started these campaigns against teachers, we started actually talking about school administrators because they’re the ones that really create the problems and everybody knows it. You know, don’t do anything, and it had no purchase. People wouldn’t get excited about them. Then we started talking about teachers, it took off.”

RANJAN BALAKUMARAN: Complaining about, you mean?

DAVID GRAEBER: Yeah, campaigning against it.