During her Senate confirmation hearings, CIA nominee Gina Haspel evaded questions about her role in using "enhanced interrogation" (torture) techniques, which have their origins in the Nazi-era, explains for CIA analyst Ray McGovern

During her Senate confirmation hearings, CIA nominee Gina Haspel evaded questions about her role in using "enhanced interrogation" (torture) techniques, which have their origins in the Nazi-era, explains for CIA analyst Ray McGovern 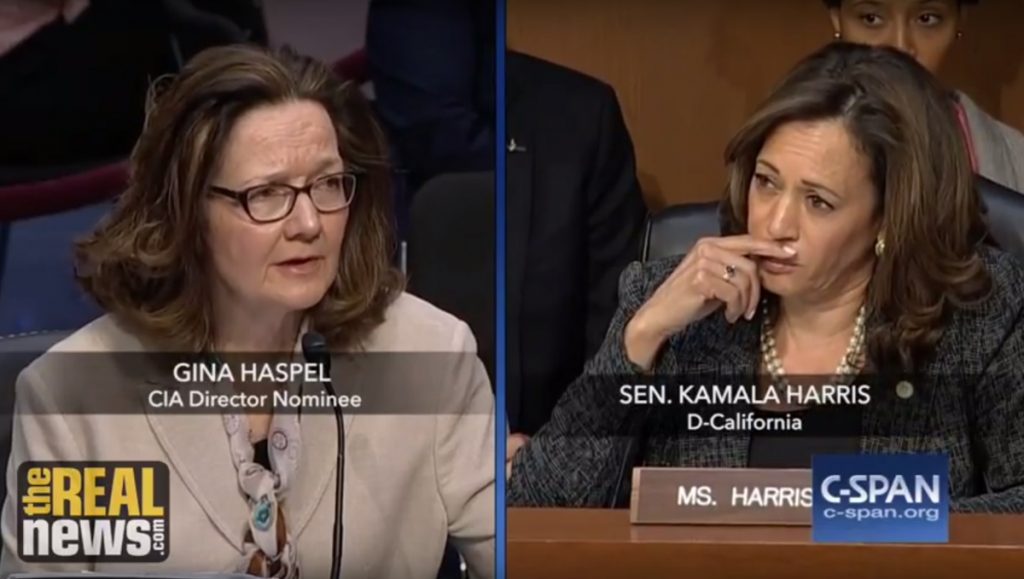 I hope by now you have seen the brave whistleblower Ray McGovern, former Army infantry intelligence officer who then served as CIA analyst for 27 years, from the Kennedy presidency to the George H.W. Bush presidency. Ray’s duties back then included sharing the National Intelligence Estimates and preparing the president’s daily brief, which included briefing President Ronald Reagan. He was Reagan’s five most senior national security advisers from 1981 to 1985. Well, two days ago, in an act of civil disobedience, Ray McGovern protested the confirmation of Gina Haspel as CIA director. Here is what happened.

Ray McGovern joins us today from Washington D.C. Ray, thank you for joining us.

RAY MCGOVERN: Thanks for inviting me.

SHARMINI PERIES: So Ray, it looks like you underwent some torture of your own, there. How is your arm? And tell us what happened to you once you were taken into custody.

RAY MCGOVERN: Well, I do have this chronic dislocation of my left shoulder from a basketball injury, but luckily it didn’t go out this particular time. I did suffer the bruises from, from, and the cuts from, you know, the steel handcuffs, and that kind of thing. But I’ll survive. You know, we make a joke in the Bronx about when this happens to somebody. We say, you should see the other guy. [Inaudible] in the hospital right now. I make a joke, of course.

SHARMINI PERIES: All right. You’re being funny, Ray, but how long were you in custody, and what happened during that period?

RAY MCGOVERN: Well, I was put in this jail cell about 2:00, 3:00 Wednesday afternoon, and not until after 5:00 was I released, having appeared before a judge and being accused of disrupting Congress, and resisting, resisting arrest. So you heard the police saying, “Stop resisting, stop resisting,” you know.

SHARMINI PERIES: All right. So this was, you were detained for 27 hours. Now, now why did you, a 78-year-old man, find it necessary to engage in such an act of civil disobedience to get your point heard about the Haspel confirmation? I mean, you’re no lightweight. You have access to Congress. You are meeting with people from the Hill all the time. Why did you find it necessary to be heard in that manner at that hearing?

RAY MCGOVERN: Well, two things I’d say, Sharmini. Number one, I took a solemn oath to protect and support the Constitution of the United States against all enemies, foreign and domestic. One oath. I checked. It has no expiration date. What’s going on with respect to torture was a gross violation of our laws, international law, and the Constitution of the United States. This is no a trifling matter. My colleagues and I still uphold our Constitution.

Now, the second thing, of course, was, gosh, this person was introduced and supported by our old colleagues. My God. Now, that was really painful for me, to see Charlie Allen and others with whom I worked for years, who were responsible, people with integrity. But after 9/11 everything changed. OK.

Now, the proximate cause of my doing what I did was when the chair started his comments he said, I have to quote him specifically here, and I’ll have put on my broken glasses to do it. Here’s what Richard Burr, the chair of the Senate Intelligence Committee said. “We are in open session now. We’re going to closed session. There will be people who have comments. And I tell them to do so, do it fast, do it quickly, and be gone.” And everybody’s… Well, I said, wow, I’ve never had a chairman of the committee invite people from the audience to make a quick, a rapid comment, and then be gone.

So when they, when it became clear that Gina Haspel was avoiding the key answer that Senator Wyden asked her, namely, were are you in charge of the waterboarding of al-Nashiri in Thailand, and she said, “Senator, I’m sorry, but that’s classified,” and he didn’t have time to say, well, who classified it? What the answer to that, of course, is, me. I classified it. So you have a situation where the head of the CIA, acting, is classifying information that incriminates her, and should disqualify her from becoming the director of the CIA. So she said we have to go to a closed session for that.

So that was my question. I went up and I said, look, Sen. Wyden is entitled to a straight answer on that. You all know because you have the documents. I know because it’s been public. So the notion that Gina Haspel can say no, no, we can’t let the American people know, there being millions of American people watching this hearing, that’s what public hearings are all about. The notion she said no, no, I classified this, that was a little too much. I said, she’s entitled to a straight answer. And besides, torture is never legal. It cannot be named legal. And that’s, of course, was too much for me to just leave, or be gone, as the chairman had said. I was assisted, as those videos show.

SHARMINI PERIES: All right, Ray, let’s just briefly look at the exchange about the most crucial issue at stake in these hearings in terms of Gina Haspel’s position. She’s being questioned here by Kamala Harris about torture. Let’s have a look.

KAMALA HARRIS: The president has asserted that torture works. Do you agree with that statement?

GINA HASPEL: Senator, I, I don’t believe that torture works. I believe that in the CIA’s program, and I’m not attributing this to enhanced interrogation techniques, I believe as many people, directors who have sat in this chair before me, that valuable information was obtained from senior al Qaeda operatives that allowed us to defend this country and prevent another attack.

KAMALA HARRIS: Is that a yes?

SHARMINI PERIES: All right, Ray, let me get your reaction to that exchange.

RAY MCGOVERN: Well, that’s a disingenuous in the extreme. Torture doesn’t work. The saddest thing, in my experience, is that most Americans think that torture works. That’s Hollywood. That’s TV. That’s with a big assistance from the CIA. OK? It doesn’t work. The head of Army intelligence, on the same day that George Bush was advertising the benefits and effectiveness of enhanced interrogation techniques, General John Kimmons got up before the press in the Pentagon one hour before, gutsy General, he, and John Kimmons said, and I quote: “No reliable intelligence has ever come from harsh interrogation techniques. History shows that, and the experience of the last five years, hard years, also demonstrates that.” End quote. Last five years, 2006 minus 5. 2001, when people like Gina Haspel and her, and her bosses were devising ways that they could use enhanced interrogation techniques.

And Gina Haspel supervised the waterboarding of al-Nashiri. And we can prove, everybody knows that. But she was unwilling to say a straight answer to that when Sen. Wyden asked her, because she had retroactively classified that information. She could only talk about it in closed session. I mean, what kind of country is it that has an open hearing, an ostensibly open hearing-. And Wyden’s time had expired. But you would expect Richard Burr, the chairman, to say now, now, Ms. Haspel, that’s a simple question. You know the answer. We know the answer. The American people need to hear the answer. So did you supervise the waterboarding and worse of waterboarding, let’s say, of al-Nashiri in Thailand? And she would have had to say, well, yes, sir, I did.

Then the American people would know that this is the person that the president, who thinks torture works, and torture and worse should be implemented, has picked to be the head of the CIA. And she says, well, no, we’re going to do moral stuff now. And they say, well, if the president orders you do that? Oh, he would never order me to-. You know, it just doesn’t parse. And the American people are deprived of the real information here. And that’s what got me up to try to clarify the situation. And I only got, like, a half sentence out before you saw those four gentlemen from the security folks, who apparently hadn’t heard the chair say, look, if you have something to say, say it quickly and then be gone. Well, I was going to be gone, but I was, I was helped to be gone. Let’s put it that way.

SHARMINI PERIES: So in the great nation of freedom of speech, your speech was muted, to say it mildly. Ray, please join me to continue this discussion in our second segment. I thank you, and those of us who are listening to this interview, I invite you to join me and Ray in the next segment. Thank you.

Ray McGovern is a retired CIA officer and was employed under seven US presidents for over 27 years, presenting the morning intelligence briefings at the White House under Presidents Ronald Reagan and George H.W. Bush.

Pompeo is “Setting the Stage for a War with Iran”