The U.S. territory was hit with two major earthquakes and hundreds of aftershocks, but local and national politics are still getting in the way of real help for the people of Puerto Rico.

The U.S. territory was hit with two major earthquakes and hundreds of aftershocks, but local and national politics are still getting in the way of real help for the people of Puerto Rico. 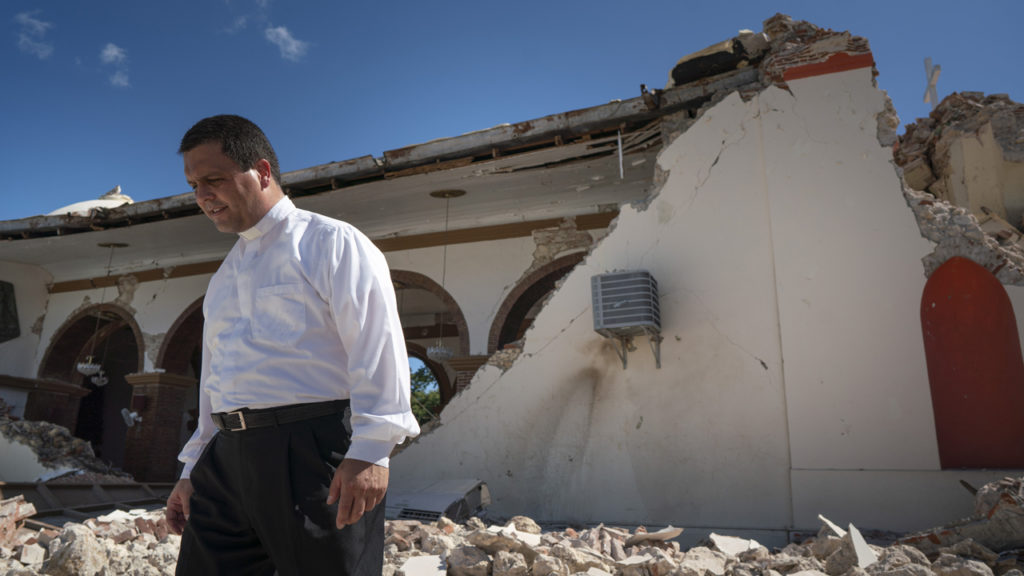 Greg Wolpert: Welcome to the Real News Network. I’m Greg Wolpert in Arlington, Virginia. Last Saturday, another major earthquake hit Puerto Rico, the 6.0 magnitude quake followed on the heels of a 6.4 magnitude quake that hit the island last Tuesday, which killed at least one person and caused an estimated $110 million in damage to buildings and infrastructure.

Power was temporarily knocked out of the Puerto Rico. Power Authority says 94% of the population has electricity again. Still, over 6,000 Puerto Ricans are estimated to be staying away from their homes because these have been destroyed or damaged. Their earthquakes come at a delicate time for Puerto Rico as it continues to recover from both political upheaval and natural disasters.

In September, 2017 hurricane Maria hit the island. A category five hurricane, which killed at least 3000 people and caused an estimated $100 billion worth of damage. Then last August, governor Ricardo Rosselló resigned in a scandal because he and his advisors mocked ordinary Puerto Ricans. Joining me now to discuss the situation in Puerto Rico is professor José Caraballo-Cueto. He’s an economist and associate professor at the University of Puerto Rico. He is also the director of the Census Information Center. Thanks for joining us again, José.

José C.: Well there was a blackout for almost a week and most of the sectors right now have electricity, but it’s coming back and forth. So it’s not stable, especially in the South, there is a lot of of people that are not working right now because many businesses, they don’t have electricity or continuous electricity, but more important that many businesses were destroyed and there’s people that lost their home, but there is also people that are almost losing their jobs. So I will say that the economy, especially of the South of Puerto Rico has a stop and there is no interest either in the local government or in the federal government to resolve basically.

Greg Wolpert: Well, I want to turn to that in a moment, but first, as I mentioned earlier, Puerto Rico is still recovering from hurricane Maria, which tore through the island more than two years ago. Now, how well has Puerto Rico been able to recover since then and how badly have these quakes set the recovery back?

José C.: That’s a very important question. Yesterday I was in Guánica which is the county, was the epicenter of this earthquake and I say the ongoing earthquake because we have had more than 503 earthquake since December 28th. So there’s a lot of people there afraid that the economy has halt. It looks like a war zone there. And I talked to a couple of refugees that are in improvised shelters about have you seen anybody from FEMA here? And they say no. Actually, the roof of my house was destroyed with the hurricane. It took a while to repair it. And now the structure, especially the walls of my house are destroyed. Now I have a roof, but I don’t have walls in in my house, so I have to be in an improvised shelter that the only people that have bringing humanitarian aid has been local organizations and individuals that want to show solidarity. But there is, as I said, no interest whatsoever in the local or the federal government.

Greg Wolpert: Well that’s exactly the issue I want to turn to now. The US government is supposed to disperse $18 billion in aid, but the Trump administration is refusing to do so arguing that corruption in Puerto Rico would make disbursement pointless. Now Trump is withholding this aid even though Congress recently mandated the immediate release of $8 billion worth of aid. Now what’s your reaction to the Trump administration’s argument about corruption as being the reason for or justification for holding back aid?

José C.: That’s just an excuse. We can see how much the president cares about Puerto Rico. It’s more than one week from the big earthquake and so far, not even one statement saying, I’m sorry with the victims we don’t have in here even that. That anybody will will say, especially in his position. The federal government have many controls for corruption.

No reconstruction in any state will depend on the good faith of local officials. The federal government have many controls for corruption and even though FBI actually works in Puerto Rico and is paying a lot of attention to these issues. I don’t think that we should be waiting more than two years for reconstructing houses and people are suffering. I saw many going to the countryside here in Puerto Rico, many houses with blue tarp in a season where you have a lot of rain in the island.

I don’t say there is any justification for that and also there is no justification to be exaggerating the figures. President Trump said that it has been $90 billions and no one in Congress has even said that number or allocate or or obligate those funds. We’re talking just about $40 billions that have been obligated. And not even half of those have been dispersed.

Greg Wolpert: Now I want to turn to the internal political situation in Puerto Rico. That is, how is that affecting the disaster recovery effort? I mentioned earlier that governor Ricardo Rosselló had to resign and now there’s a new governor, Wanda Vázquez, who’s running for election in 2021. What if any effect has that had on the recovery effort? And also can you talk about the referendum on statehood that’s scheduled for later, I think, this year? What impact might that have on the situation right now?

There is a big disregard about this new government that we have in Puerto Rico because most of the officials are the same one that used to work with the previous governor and they really are not paying attention, not even having a plan to how to address this disaster. Some people are talking that we have to evacuate people from the South, move it to other parts.

I’m not even sure how they’re going do that. There’s a lot of poor people that are actually Guánica will qualify us the poorest county in any US territory. It’s 65% of the population that is poor there. How are you going to evacuate that population? It’s hard to know and there is no plan and actually they’re are just talking about elections and how they’re going to win, but they’re not really establishing any policy to recover from hurricane Maria to recover from this earthquake and to prepare us here or the next event that we may have.

Greg Wolpert: Okay, well. We’re going to have to leave it there for now, but I was speaking to José Caraballo-Cueto, associate professor at the University of Puerto Rico. Thanks again, José, for having joined us today.

Greg Wolpert: And thank you for joining The Real News Network.

Jose Caraballo-Cueto is an associate professor at the University of Puerto Rico. He is also the director of the Census Information Center.