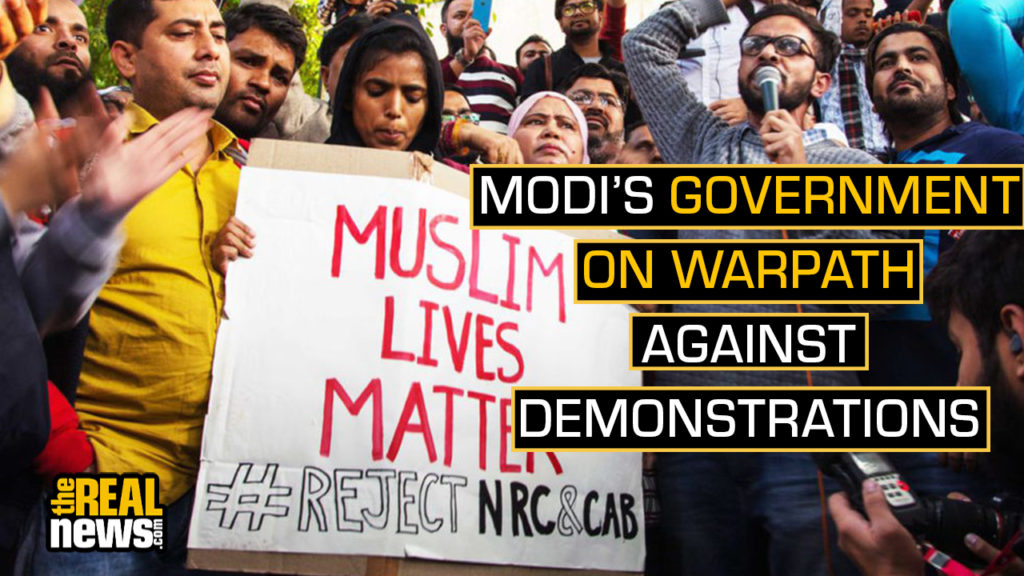 MARC STEINER: Welcome to The Real News. I’m Marc Steiner. Good to have you with us.

When India passed the new Citizenship Amendment Bill, nonviolent demonstrations erupted across the entire country over the course of last week in the process of confronting this new law that will give citizenship to new immigrants from neighboring countries as long as they are not Muslims. The process included demonstrations and strikes in public buildings. Hindus have joined Muslim demonstrators, saying this law violates the Indian Constitution and is a blatant attack on the rights of India’s Muslim citizens.

The repression against demonstrators by the Modi government has been swift and violent. Police attacked unarmed students. Over a hundred students have been injured at New Dehli’s Jamia Millia Islamia and Muslim University Aligarh. It continues. And Priyanka Gandhi, the General Secretary of the All India Congress Committee and opposition leader in the Eastern Uttar Pradesh Province participated in these demonstrations along with many other non-Muslim Indians, as we talked about before. She had this to say in the midst of that protest.

PRIYANKA GANDHI: The government has attacked students by entering universities. We will fight the constitution of India. We have said it time and again and we will fight against the government

MARC STEINER: We are now joined by Sumit Ganguly, who is Professor of Political Science and holder of the Tagore Chair in Indian Cultures and Civilizations at the Indiana University in Bloomington. His most recent book is The Future of ISIS. Sumit, welcome to The Real News. Good to have you with us.

MARC STEINER: Let’s begin here. I think that the Congress party, those on the left and Muslims in India are protesting a violation of the constitution they say and discrimination against Muslims in India. At the same time, right wing demonstrators are also protesting the law because it grants citizenship to immigrants. So, let’s parse this out a bit. Can you tell us what’s really happening here? What’s at the heart of these protests and what’s the most important thing we should focus on?

SUMIT GANGULY: The protests as you correctly characterize differ depending upon which group one is focusing upon. On the one hand, there are people in the Northeastern state of Assam or aggrieved with this law because they fear that large numbers of poor migrants, regardless of their religious affiliation, are likely to move in to Assam from the neighboring Bangladesh and it may also grandfather people who had illegally migrated.

They are not so concerned about the religious composition of these people as much as the sheer numbers of people who could be or could become Indian citizens as a consequence of this law. On the other hand, you have people in the heartland of India, particularly in Uttar Pradesh and in the national capital territory of Delhi where you have a much more varied set of protesters who are protesting much more along the lines that Indian secularism is under attack.

Because the migrants from Afghanistan, Bangladesh and Pakistan could be of any religious tribe as long as they are not Muslims. This has brought together a real wide coalition of individuals regardless of their religious affiliation, saying that the secular foundations of the Indian state are under attack and that’s why we are protesting this particular law.

MARC STEINER: When you look at this law, it seems to be part of a wider agenda of Prime Minister Modi and his BJP party that goes to the heart of annexation of Kashmir and the anti-Muslim citizenship laws in some providence. It appears like, as you were just talking a moment ago though, that an all out sectarian war targeting Muslims and others is kind of bubbling up as the enemy from within.

Yet the other hand, and you were pointing out, so many people who are not Muslim we’re joining in all these demonstrations at the universities and other places. Then BJP won with a fairly wide majority, it seems to me, given the election itself. So tell us just how is this political playing out?

SUMIT GANGULY: The way it’s politically playing out is the following. Obviously, the staunch supporters of the BJP are exceedingly happy with this law, with the revocation of the special status of the state of Jammu and Kashmir with the recent Supreme Court decision, which allows a Hindu temple to be built on the premises where a mosque used to stand, which was demolished in December 1992.

All of these things have made the supporters of the BJP, particularly the more ardent supporters of the BJP, exceedingly happy. On the other hand, large numbers of people in India civil society are acutely distressed with this turn of events because there’s a real danger of India being turned into a Hindu majoritarian state if all of these pieces of legislation and court decisions in favor of the BJP continue a pace.

MARC STEINER: The BJP, as we talked a minute ago, won these elections, as they wasted no time in implementing these anti-Muslim laws. The other question though I have is: is this part the only other Hindu nationalist agenda? But it seems like it’s part of this new worldwide kind of right wing alliance. Trump, the United States, Johnson and the UK, Bolsonaro in Brazil and all the rest were fiercely Islamophobic.

Perhaps it’s worth mentioning also the Indian Council in New York said the annexation of cashmere was inspired by the Israeli occupation of Palestine. So how much of this goes beyond do you think the borders of India and this world alliance? Again, politically, how do you think these things interact?

SUMIT GANGULY: I think that in many ways the actions of the BJP are possible not only because of their substantial majority in the Indian parliament with 303 seats out of her 545 seat parliament. But in addition to that, the global climate is creating permissive conditions. The United States, which are under a different administration, might have taken a very dim view of these developments in India and the state department probably would have spoken out with some vigor. There’s been a deafening silence.

Consequently, there are these permissive conditions which allow a right wing government and majoritarian government like that of Modi to proceed a pace, knowing perfectly well that the criticisms are going to be few and far between. Major countries like the United States are preoccupied with their own issues, particularly the impeachment. In Britain, there’s been an election with a right wing prime minister known for his mendacity, who’s come into office who could care less about the plight of Muslims in India.

One of the few countries that has spoken out is Germany under Angela Merkel. But, the vast majority of major countries have remained silent on this issue or have simply looked the other way. Consequently between a powerful majority at home and permissive conditions abroad, the BJB can proceed with these plans.

MARC STEINER: It seems if the Muslim community in the world at large, whether you’re looking at China or India or Burma, you could sense a feeling of discrimination and kind of pushing against the Islamic world. You could emotionally see that happening. I’m also curious, when you look at these demonstrations in India itself, as we talked about earlier, they cross a wide spectrum of people, and they’re standing up.

Whether they are Hindu or Muslim or Sikh, whoever they are, they’re standing up together against this law. So, what political dynamic inside of India itself is afoot? Does it mean anything in a larger political struggle in that country?

SUMIT GANGULY: Of course it does. For all its flaws, India has been a democratic secular state-

SUMIT GANGULY: …Against all odds. But now those values, those institutions, those principles are all under assault. They are facing literally a battering ram at the hands of the BJP. This has generated a counter reaction. Perhaps this might actually revitalize the principle opposition, the Congress party, which had been anemic and had been somewhat dispirited for some time and had been rather slow in the defense of secularism.

But this might be a wakeup call to the Congress party as was demonstrated by the fact that Priyanka Gandhi, one of the signs of the Gandhi family, actually went out to protest and joined the protesters and new Delhi’s cold. As your pictures show.

MARC STEINER: We’ll stay on top of this and watch this. Sumit Ganguly, we appreciate you taking your time with Real News today and look forward talking to you more as this unfolds and see what’s happening inside of India in the context of the entire international world and battling with right-wing governments. Want to thank you so much for joining us today. It’s been a pleasure to talk with you.

SUMIT GANGULY: Happy to be of assistance.

MARC STEINER: Thank you. I’m Marc Steiner here for The Real News Network. Thank you all for joining us. Please let us know what you think. Take care.